Do you believe in poetic justice? Well, I do.

Here’s a real-life example of it happening.

Once upon a time, Blockbuster Video was a giant on the entertainment landscape. It was worth over $5 billion, and it had over 9000 stores and 60,000 employees worldwide.

The Blockbuster business model was simple but effective — you could walk into any of their outlets, pay a rental fee, then walk out with your chosen movies. 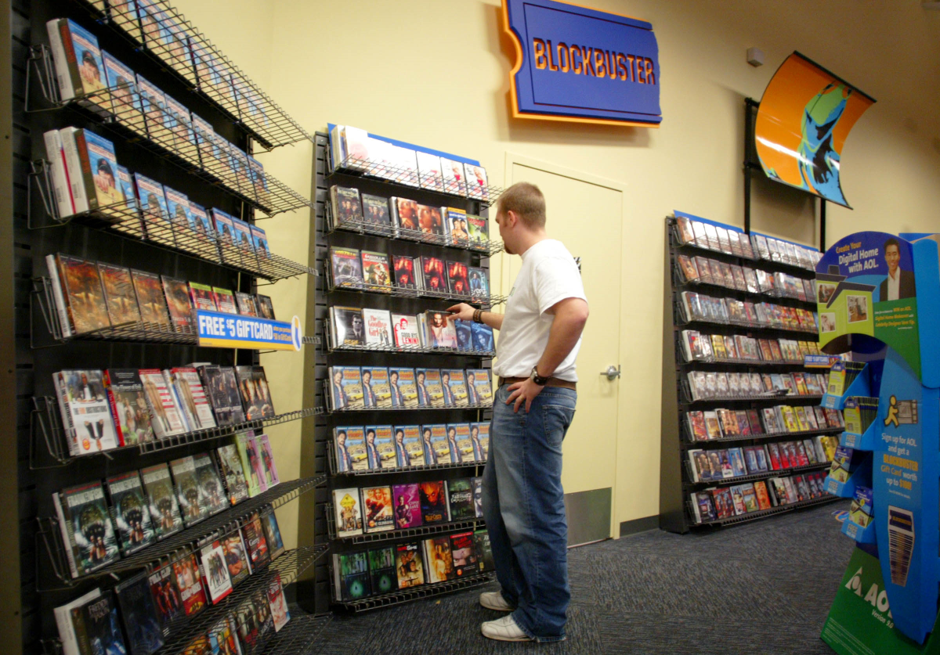 The Blockbuster brand was iconic, and it was a fixture in most urban areas. It looked like a colossus with no signs of stopping.

Meanwhile, on the other end of the spectrum, something else was happening.

Two guys named Marc Randolph and Reed Hastings were building a new start-up business. Their model was vaguely in the same space as Blockbuster, but with a quirky twist: they had no physical outlets. Instead, they focused on sending movies out to members by mail.

The name of this company? Netflix. But not Netflix as we know it today. Back in 2000, the business was struggling to gain traction, and it was on track to lose $50 million that year.

In a last-ditch attempt to save their baby, Randolph and Hastings flew out to Dallas, Texas. They set up a meeting with Blockbuster CEO John Antioco. Their goal? To sell Netflix to Blockbuster for $50 million — which would be enough to get them out of the red and into the black.

It was passionate. It was earnest. And…it failed. Badly.

Antioco wasn’t impressed with their proposal. By some accounts, he actually thumbed his nose and sneered. Why on earth would he want to buy a failing business?

The rise of Netflix

That rejection hurt. It really hurt. But Randolph and Hastings decided to push on anyway, icebergs and torpedoes be damned.

The following years were tough, but by 2004, their fortunes began to turn. That’s when DVD players hit the American mainstream, reaching two-thirds of households. It was a development that gave Netflix the breakthrough they badly needed.

They marketed their brand aggressively. And DVD consumers responded favourably to their mix of convenience, availability, and price. From 2004 to 2006, the Netflix subscriber base jumped from 1 million to 5 million, and it kept on surging. 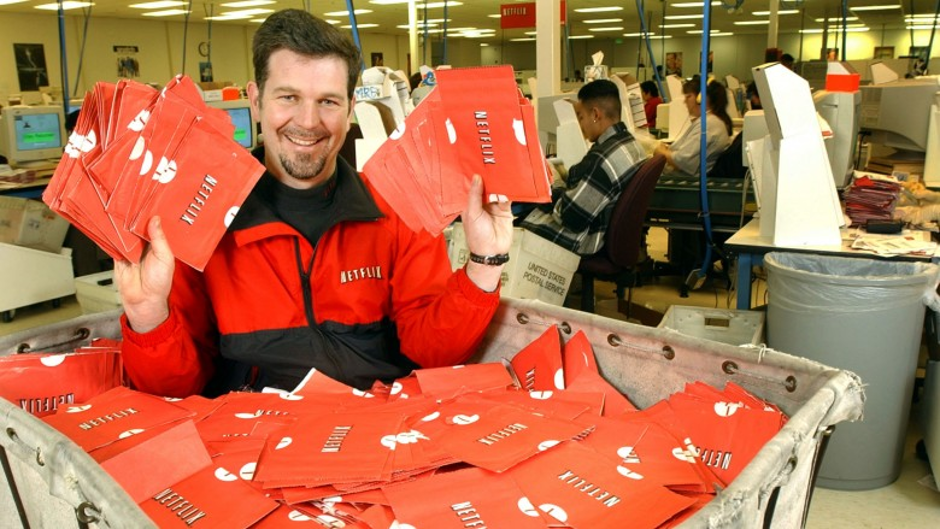 Even while this was happening, another intriguing development emerged on the horizon — internet streaming.

Now, for most people at the time, this looked like a novelty. But for Randolph and Hastings, it felt like an untapped opportunity. Instead of delivering movies through old-fashioned post, why not deliver them digitally? Better yet, why not design a whole new platform? Video on demand?

Of course, this was a gamble. The venture would require a fair bit of R&D. Trial and error. But Randolph and Hastings were already used to thinking outside the box, and with their DVD-rental business going reasonably well, they felt they could afford to take the risk.

So they rolled the dice. They went ahead and built the world’s first TV streaming platform.  They tweaked and refined it obsessively, delivering licensed content provided by Hollywood studios.

This was a real game-changer. And it wasn’t long before Netflix’s streaming service began to match, then eclipse the DVD side of their business. It was a trend that accelerated with the adoption of mobile devices and higher internet speeds.

This gave Randolph and Hastings the confidence to make their next big leap: go into television production and create original content exclusively for Netflix.

What happened next was a revolution. 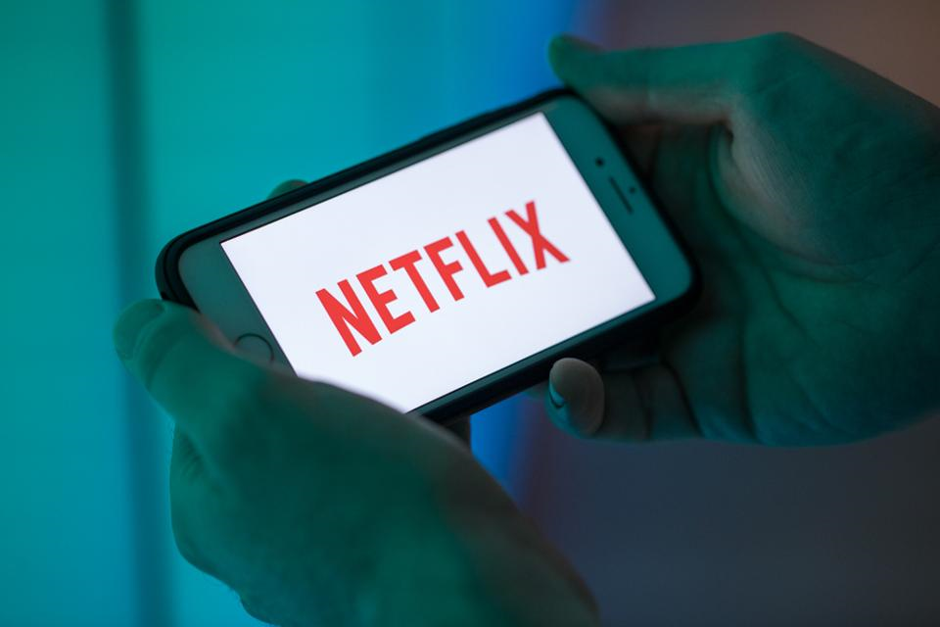 Netflix currently is available on every screen and device. Source: Forbes

To put that into perspective, just picture this: if you had just invested $10,000 in Netflix in 2002, that amount would be worth close to $2.5 million today. Astronomical.

Meanwhile, the passage of time has not been kind to Blockbuster Video. In 2010, it was forced to file for bankruptcy. And since then, its 9000 stores have dwindled to just one — a lonely outlet currently standing in the small town of Bend, Oregon.

It’s a tragic ending for a once-great titan.

Still, this does pose an interesting question: what if Blockbuster CEO John Antioco had looked beyond his prejudice back in 2000? What if he had gone out on a limb to purchase Netflix for a mere $50 million?

Well, in the grand scheme of things, that $50 million would have been chump change. Especially when you consider that Netflix today has a market capitalisation of over $130 billion.

Clearly, in this case, the apprentice has usurped the master. Dramatically and decisively.

We’re now living in the Golden Age of Television. Or, if you want to use a more elegant phrase, you can call it Peak TV.

It started with The Sopranos in 1999, and in the new millennium, it hit its stride with dramas like 24, Breaking Bad, and Game of Thrones.

Yes, these were water-cooler shows that generated such giddy excitement. You couldn’t help but talk about them while gathered around, well, the water-cooler at work. 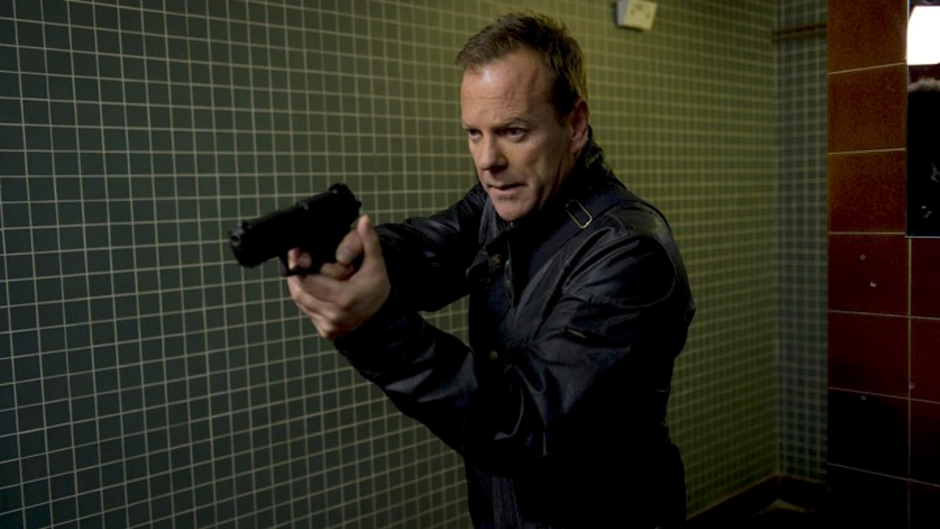 The real-time ticking clock in 24 was an example of Peak TV. Source: The Atlantic

It was within this dynamic backdrop that Netflix established itself as one of the FAANG Stocks. These were popular tech companies that CNBC’s Jim Cramer hailed as representing the wave of the future.

And why not? Netflix’s meteoric rise has been fuelled by investors feverishly pouring money into it, allowing it to expand and consolidate its presence on the entertainment sphere. Little wonder, then, that it currently has a P/E (price-to-income ratio) of over 95.

This optimism has allowed Netflix to spend a mountain of cash on exclusive shows like Stranger Things, Orange is the New Black, and Narcos. The amount they’ve burned through is, quite frankly, eye-watering. It’s in excess of over $13 billion this past year alone. 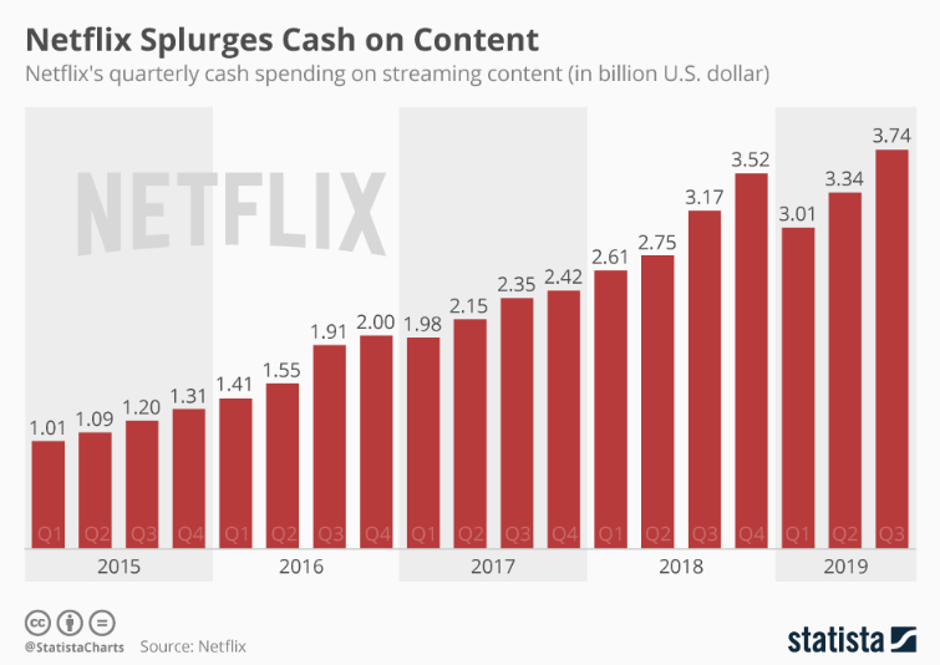 This heavy investment in content has paid dividends, translating to a sharp upswing in Netflix subscribers. Over the course of five years, their user base has gone from 50 million to over 150 million. Effectively, this gives Netflix pole position as the largest subscription streaming service in the world today. 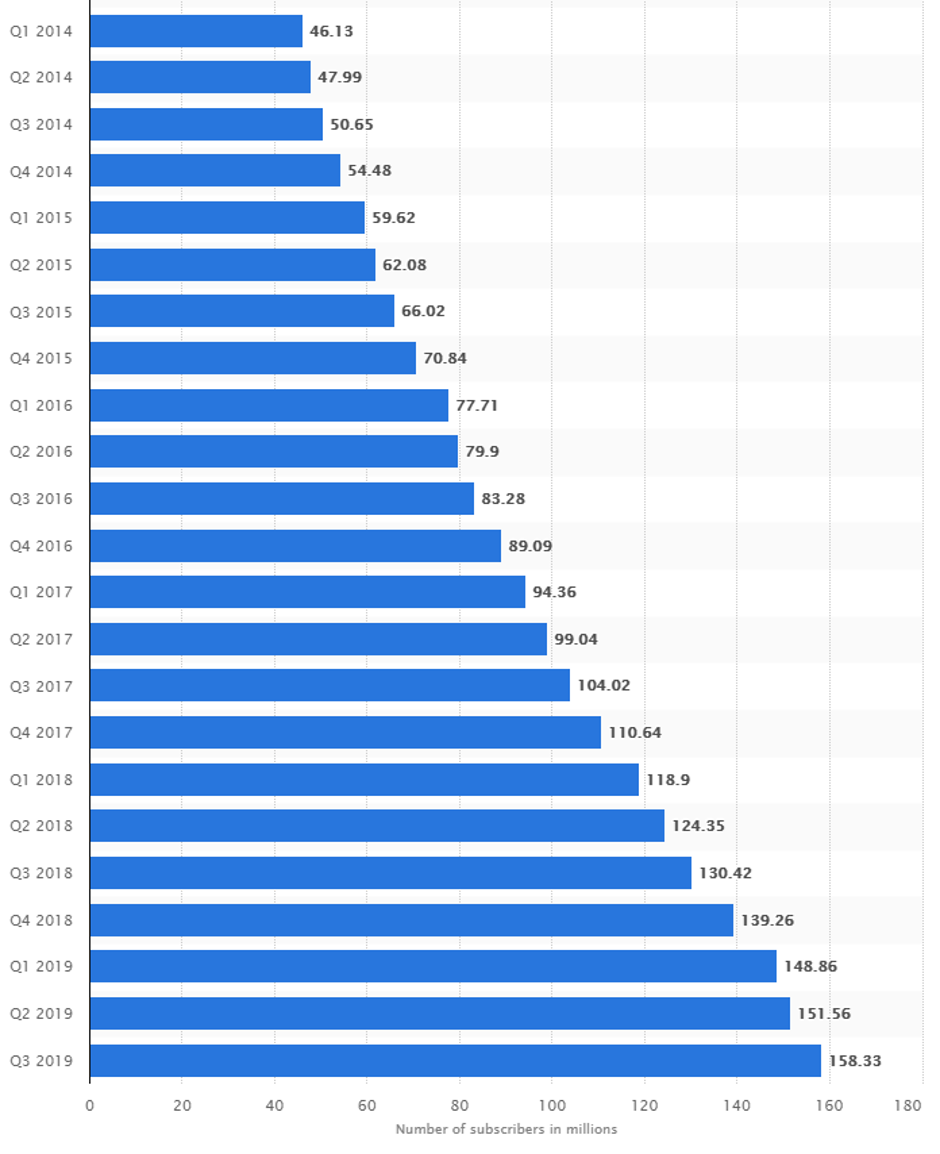 There are signs now that Netflix is starting have hit the ceiling in terms of bullish growth. The ride from here on out is likely to be tougher.

At the moment, a scrum of rivals is looking to muscle in on Netflix’s territory: Disney+, Amazon Prime, HBO Max, Apple TV, and others. 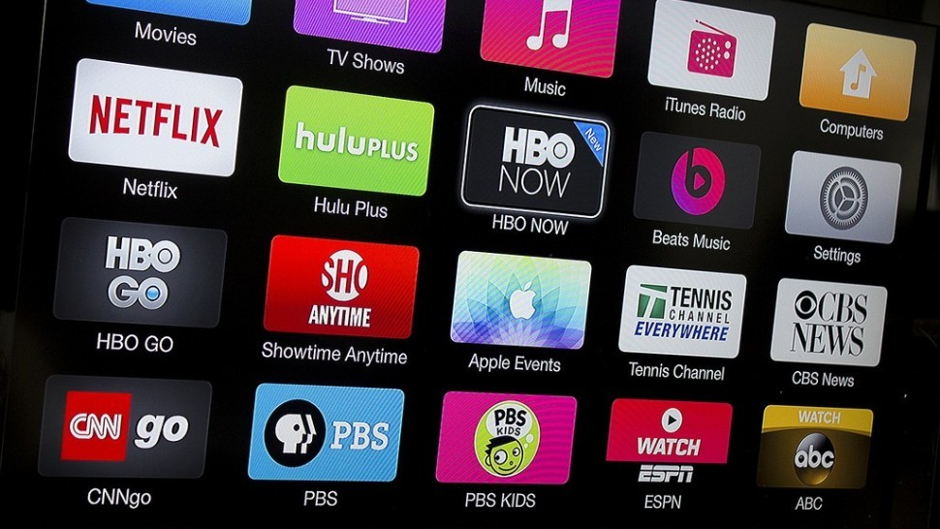 A fierce struggle to control creative properties is gaining speed. And content rights are now being jealously locked away behind exclusive paywalls.

Here’s a case in point: since 2015, one of Netflix’s most popular shows is the sitcom Friends. It has great name recognition. It’s evergreen. Folks like to watch over and over. But come 2020, Friends will no longer be on Netflix. It will be moving over to HBO Max instead.

The strategy is clear: Hollywood studio bosses will no longer allow Netflix to easily profit from their creative franchises any longer. Rather, the goal is to lure paying subscribers away from Netflix and funnel them towards other streaming platforms instead.

This means that it’s now impossible to watch all your favourite shows in one place. And given that the entertainment landscape is fracturing before our eyes, analysts are now wondering how many different subscriptions the average viewer is willing to pay for. Three? Four? Five? Really, how much is too much?

Earning an entertainment dollar today is arguably harder than it was 10 years ago. Maybe it’s time to take a step back. Consider how history works in cycles. And how poetic justice is never very far away.

Remember: it wasn’t so long ago that Netflix was the young upstart looking to dethrone the Blockbuster behemoth. It felt like an impossible task, but against incredible odds, Marc Randolph and Reed Hastings succeeded.

Now, ironically, Netflix is the dominant titan that hungry competitors are starting to circle around. Netflix has a sturdy position, yes, but is it vulnerable to the winds of change?

Randolph and Hastings must surely sense this, and they are keeping their eyes firmly set on the rearview mirror for their incoming rivals, even as they continue to pump the gas pedal as hard as they can.

The Streaming Wars have only begun.

How will it end?

PS: For cutting-edge analysis on the best opportunities around the globe, I highly recommend that you take a closer look at Lifetime Wealth Investor. We’ll show the possible benefits of the most intriguing opportunities that you have never heard of.