This Could Be a Sign of the Next Crash

For most, 1994 wasn’t particularly memorable.

There was no presidential election, no major geopolitical shocks, no stock market crash.

The US economy was in its 34th month of growth. Bond yields were historically low. Wages were going nowhere. Inflation seemed negligible.

Very similar to our situation today, don’t you think?

But for some investors, 1994 was one of the worst years of their professional lives. Several months into the year, the bond market collapsed.

From January to mid-September, US bond lost more than US$600 bln of their value. It was the single worst year for bonds.

There are still hedge funds and bond mutual funds today living with the losses of 1994.

And there’s a possibility for another ‘Great Bond Massacre’ around the corner.

Such an event could devastate superannuation funds and stock prices.

Let’s discuss what the trigger could be…

The year you should remember

US interest rates were hovering around 3%. The aim was to help the financial sector recover from the recent savings and loan crisis.

The business of savings and loan companies is to borrow short and lend long.

On the short side, they can usually borrow at cheaper rates. And on the long side they lend at far higher rates.

When interest rates kick up in the short-term, it spells trouble for savings and loan businesses. And that’s exactly what happened leading up to 1994.

To quell inflation, the US Federal Reserve increased interest rates to 12%.

The lift was too much too quickly for many savings and loan businesses. Almost half of all US saving and loan institutions went under.

It’s why the Fed had to backpedal and lower rates to help the financial industry.

During the mid-1990s, everything seemed to be OK.

That’s why Alan Greenspan, head of the Fed at the time, thought it was time to increase interest rates once again.

To increase US interest rates, the Fed increased its lending rate to other financial institutions and they also sell bonds to suck money out of circulation.

Over the same time, US bond yields skyrocketed, meaning bond prices plummeted. From below 5.5%, the yield on a 10-year US government bond rose above 8% at one point. 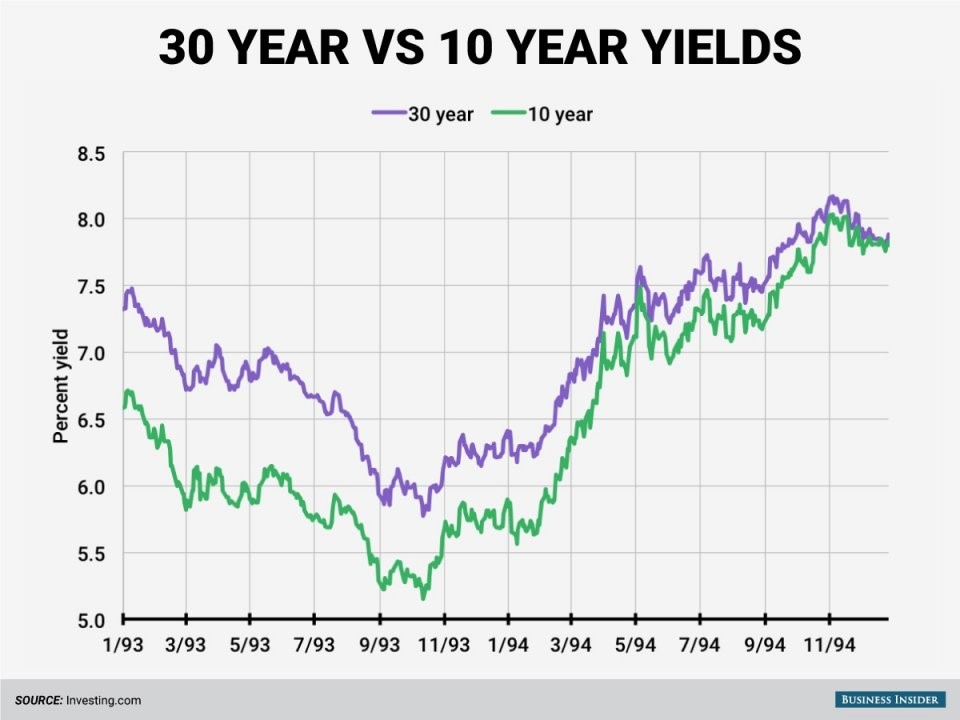 As US bond prices collapsed, so too did bond prices in most developed countries. Here in Australia we saw bond yields climb from around 6% to more than 10%.

The rise in yields not only devastated bond portfolios, it encouraged thousands of investors to jump out of stock and into high yielding bonds.

Question is, could we see a similar situation play out in 2018?

Investment opportunities abound in the worst of times

Inflation looks like it’s picking up, jobs are coming back and central bankers are looking to increase interest rates.

Right now, the only thing holding us back from a 1994 scenario is inflation. If inflation increases slowly, then central bankers can take the same drawn out approach to interest rates.

But if inflation picks up dramatically, then it might force central bankers to act with the same vigour toward interest rates.

Such an event would be terrible for bonds and stocks.

Bond prices would scream down, pushing yields up. And because risk free bond could offer a higher return than stocks, in general, investors would jump out of stocks and into bonds.

And it’s not just me worried about higher inflation.

It was again, the number one thing on fund manager’s minds in February. Take a look at the table from the Bank of America Merrill Lynch’s February fund manager survey.

Each represents a concern going forward. 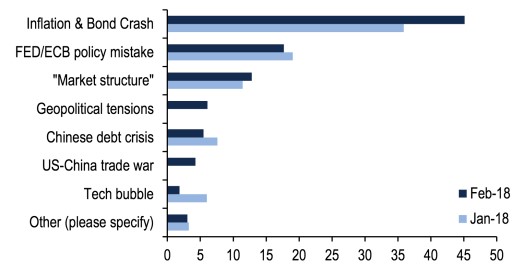 It should come as no surprise that inflation, already having scared the market before, is a chief concern going forward.

Investing veteran, Brett Gillespie also believes 2018 could be a replay of 1994.

According to Gillespie, if US 30-year bond yields rise by 2% in nine months, we might have another 1994 on our hands.

‘This is the really big risk for the market because in the past when you’ve been this far through NAIRU [the non-accelerating inflation rate of unemployment] interest rates in the US have already been at neutral or higher [rates],’ Gillespie said.

He continued, ‘…Getting a wage spurt now when you don’t have interest rates at 3, 3.5 per cent, that’s when you say the Fed’s behind the curve and that’s when the market panics,’

Basically he’s saying if wages start rising, so too will inflation. And as inflation picks up, the market will panic about rapidly rising bond yields.

This is more of an investing opportunity, if anything. There are investors who’ve been sitting on piles of cash just waiting for the market to rip down.

Our worst days might still be ahead of us. But it could mean opportunities abound in 2018.