Is Property Investment Immune to COVID?

So now you know the government can imprison you in your home. On the grounds of protecting you (and others) from a pandemic.

It was not an unpleasant experience in Devonport. With a largish yard private enough for nudists — though I’m not a practitioner. And the sea nearby. But a couple of years back, when we were all crammed into an apartment in Europe, it would have been different.

No doubt, the difficulty to access outside would have made the whole experience feel more like incarceration. And the neighbours aside and below would have become a little too close. 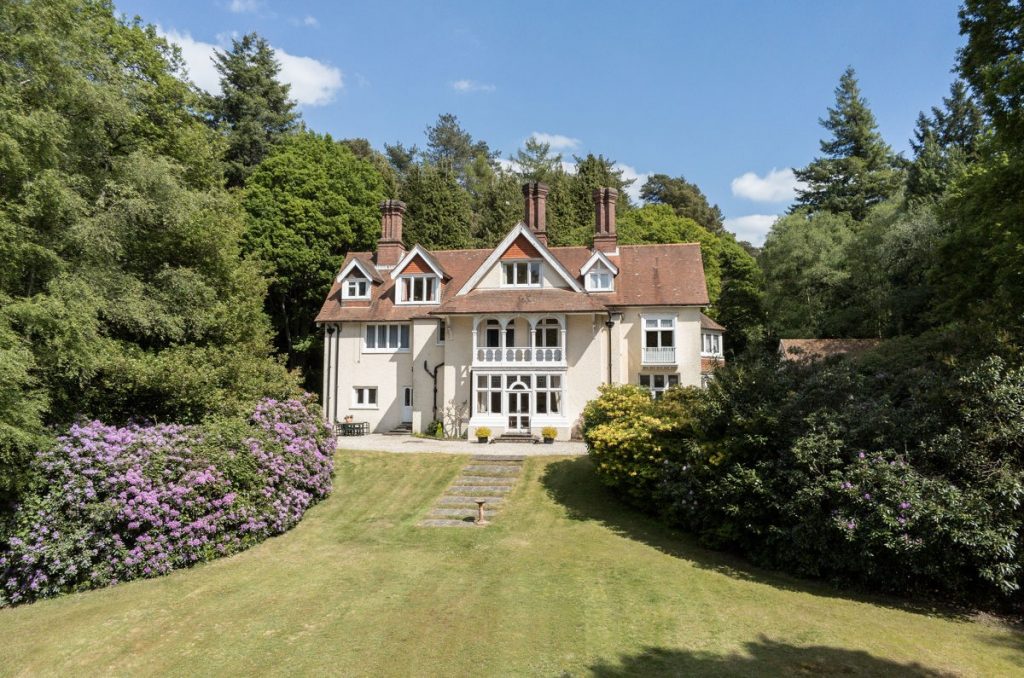 Real estate agents in Britain are now reporting surging demand for country and coastal properties. For homes with space for an office. Or at least an extra bedroom. A post-lockdown behavioural shift is driving a ‘space race’. And record home prices… 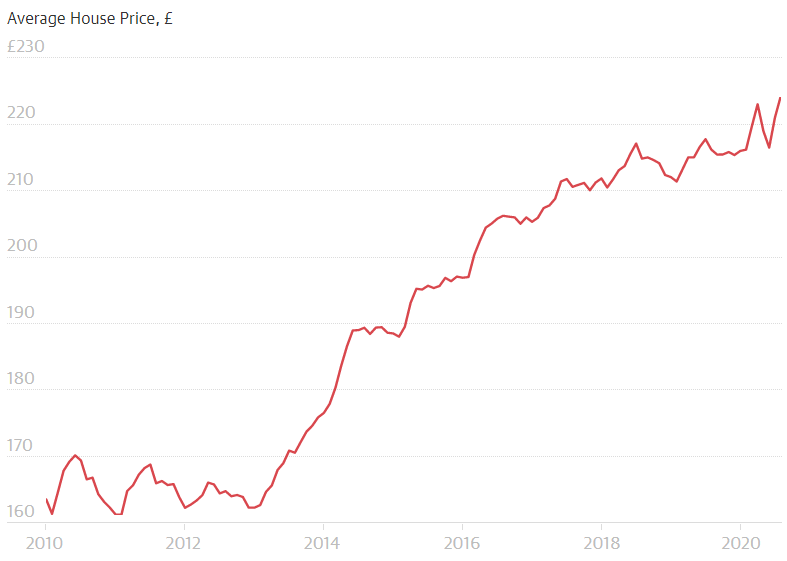 Surveys and anecdotal reports here in New Zealand suggest a similar trend. There appears a shortage of listings. And people are afraid of missing out on the space this country used to afford.

Spend any length of time in more densely populated countries and you soon realise the quality of living New Zealand offers. You can grow a lemon tree. And get a car park.

It always amused me in Europe that they often built garages so small you couldn’t get a decent car in them. The garages were for overflow of stuff from small houses. And parking difficulties turned the act of driving into piloting a helicopter. You needed to plan a landing space.

And when these crowded places get sick, you’re a New Zealand resident, and you miss friends and family…well, you have the recipe for an influx.

We had coffee with our business mentor the other week. When he’s not helping businesses, he sells them.  And he’s now seeing a shortage of businesses. People are returning to New Zealand to live, and they’re looking to buy a job.

For those looking to buy a home in New Zealand, the question is: ‘Will prices keep going up?’

Here are the key drivers of house prices…

People pay for property as much on sentiment as they do anything else.

One factor keeping New Zealand — especially Auckland — and UK property prices rising is that people think they will keep rising.

There is already a shortage of listings. People want to move back to New Zealand. Both the major political parties have run — and will likely continue to run — very high rates of net migration.

Of course, we need skilled migration. But the numbers over the past two decades are beyond what the building industry can keep up with.

Most politicians in this country lack courage.

For many years, we’ve known that universal superannuation will become more and more expensive. In the next few decades, a wave of baby boomers born in the 1950s and 60s will retire. There are fewer younger people to pay the taxes necessary to support those pensions.

But no politicians have been willing to address the affordability of this programme. And if you start means-testing the benefit now, it is unfair since many generations have enjoyed the payments regardless of their wealth.

So their solution seems to be very high rates of net migration to try and shore up the working age population.

Yet this does not entirely work. Sometimes there are skill and language gaps. But mostly the property market becomes inflated with foreign, cashed-up money.

And poorer New Zealanders get pushed down the ladder. Around 40% of the population now rent. Rates of homelessness are at the top of the developed world. The level of begging you see, even in suburban areas, suggests a Third World underclass.

Shameful economic mismanagement. But they do not care because their voters are homeowners.

For the property-owning class, the ‘growth story’ continues. At least until we have leaders brave enough to discuss a population policy and deal with pension affordability.

New Zealand property prices are in bubble territory — especially in the volcanic field of Auckland. Because they’re supported by cheap debt.

The last time house prices crashed in any severe way was during the 1970s. From 1974 to 1980, house prices fell by around 40% in real terms. The decade in which I grew up was a lost decade for those asset prices. They boomed, then they flattened.

One of the key causes was triggered by the 1973 oil shock. That sent inflation soaring and caused rising unemployment. You had a downturn of activity coupled with rising interest rates.

High interest rates reduced what people could borrow. And there was a lot less money for housing. 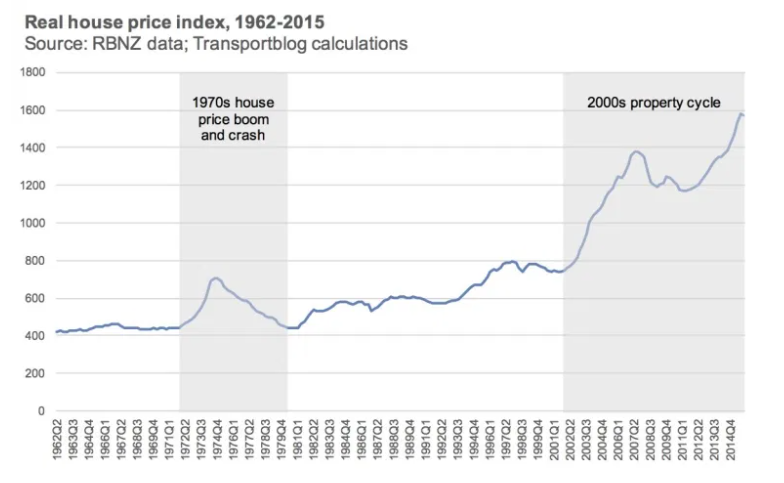 When you see several bidders for homes at auctions, it is plain that there are more buyers than homes available. Especially in preferred and/or affordable areas.

When my sister came to sell her old farm house (below $400,000), she had some 10 offers in 3 days, including a personalised letter from a first-home buying couple.

We would need to see the supply of homes increase to avoid this imbalance. Fortunately, there is a lot of homebuilding going on. Here in Auckland, we are increasing density and even importing mass-produced fabricated units from China.

Yet, ironically, it could be a demise of cheap Chinese manufactured goods that sparks inflation again. As the US (and others) seek to decouple their demand.

Compared to the 1974 crash, we are now in a more precarious position. Because we have a lot more debt. Household debt now sits at 94% of GDP. Alongside Australia, we lead the world in levels of household debt. And most of that is in property mortgages.

But there may not be a crash anytime soon. You’d need some sort of shock such as the 1973 oil crisis. Sparking inflation. Hiking interest rates. Reducing demand. Sending net migration backwards. And changing the growth story for years.

We have a few of the warning signs. Higher unemployment. A global slowdown threatening to change the world order. And beyond the initial influx of returning residents, an uncertain migration outlook.

Closer to the edge. But there’s some way to go before we approach the cliff.

One thing is for sure. When the doomsday factors do line up, they will be multiplied by debt levels. And that should serve as a word of caution.

Meanwhile, if you’re considering more resilient investment options, do check out our Lifetime Wealth Investor premium research. Our top property pick is up more than 70% since March.

As we come toward the election, we will continue to assess the economic policies of the parties. And hold them to account, where due, for turning a blind eye to market failure in the housing sector.

We are this country’s leading investment news provider. We will find a way through.