Dividend Surprise: Why the AMP Share Price is Up Over 10% Today

AMP Limited [ASX:AMP], [NZX:AMP] is a well-known financial-services business in Australia and New Zealand. It provides a mix of pension, investment, insurance, banking, and advisory products.

It actually goes back a long way. The Australian Mutual Provident Society was formed in 1849 as a non-profit life insurance company and mutual society.

In 1998, it became a public company (and listed on the ASX and NZX). Today it has one of the largest registers of local shareholders residing in Australia and New Zealand. When the society was demutualised — all the policyholders received shares.

Unfortunately, since 2018, AMP has experienced a declining share price. 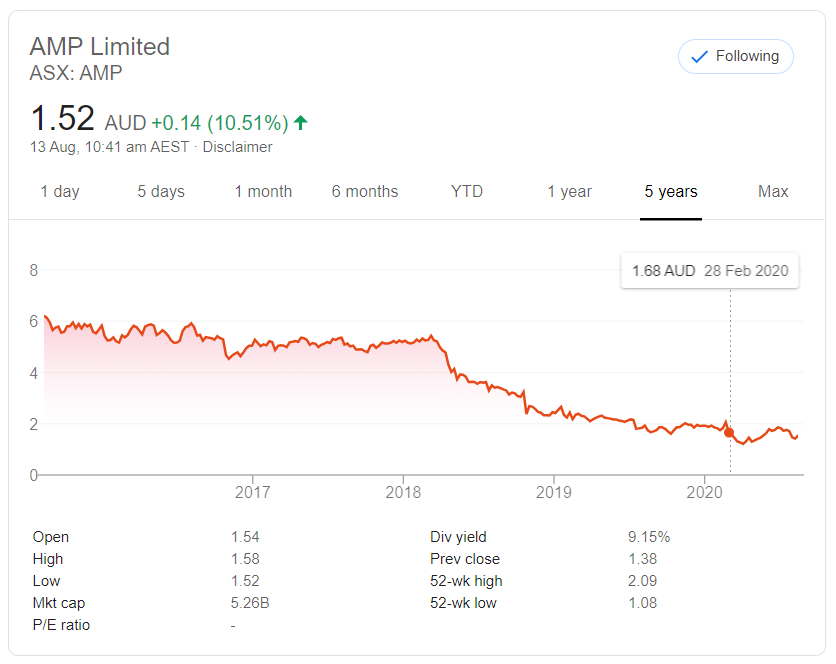 The Australian Royal Commission inquiry into financial services in 2018 revealed shortcomings. The company was found to have overcharged for financial advice it did not provide, as well as misleading the regulator.

In 2019, new CEO Francesco De Ferrari launched a billion-dollar transformation plan. With the hope of improving public sentiment toward AMP.

Based on the share price, there has been no straightforward road to redemption.

At least until today…

The company presented some extraordinary Half Year (1H 20) results today.

Following the completion of the sale of AMP Life, the board plans to ‘return up to A$544m excess capital to shareholders.’ This comprises the following:

As expected, there was some revenue pain through this period:

Yet, the business did manage to post an overall profit attributable to shareholders of A$203m.

During the same period last year, it faced a loss of nearly $2.3b after absorbing some $2.35b in impairments. To ‘address legacy issues and position AMP for the future.’

Is the business now positioned for the future?

Over the past five years, the business has grown around 7%. Not unreasonable when compared to other large Australasian financial services businesses. For example, both Westpac [ASX:WBC] and Commonwealth Bank of Australia [ASX:CBA] have struggled to grow around 0.5% to 0.6% during this time.

For now, the proposed return of capital — particularly the buy-back — is working to increase the value of AMP shares.

Of course, one issue with buy-backs is that cash is returned to shareholders rather than being invested in the future growth of the business.

Sometimes, such an approach may indicate a company sees few opportunities to actually invest cash back into the business.

We previously suspected this with AGL Energy [ASX:AGL]. Where, after looking at potential acquisition opportunities such as Vocus, none seemed to come at the right price. And buy-back of shares also took place.

Over the past few years AMP has struggled to provide meaningful return on its equity. Perhaps the worst is now behind it, and the business could be poised for post-corona recovery?

For now, we have other preferred prospects under monitoring in our Lifetime Wealth portfolio.