Home » Personal Finance » Fear Versus Greed: Don’t Invest in Your Next Stock Until You Read This

There’s no denying it: Warren Buffett is a legend.

His company, Berkshire Hathaway [NYSE:BRK.A], has clocked in an average return of 20.5% per year since 1965.

Just think about this for a moment. 20.5% annually. For 55 years. That’s over half-a-century. Over two generations.

Buffett’s patience and prudence are well-known, backed by a track record that is formidable. They don’t call him the Oracle of Omaha for nothing.

And yet, more and more, you’re starting to see young investors emerge to challenge that orthodoxy. They’re bold and brash. And they aren’t afraid to thumb their noses at Buffett.

You tend to encounter such controversial views on social media and discussion forums:

Why? Well, the proof, apparently, is in the pudding. They point to these facts: 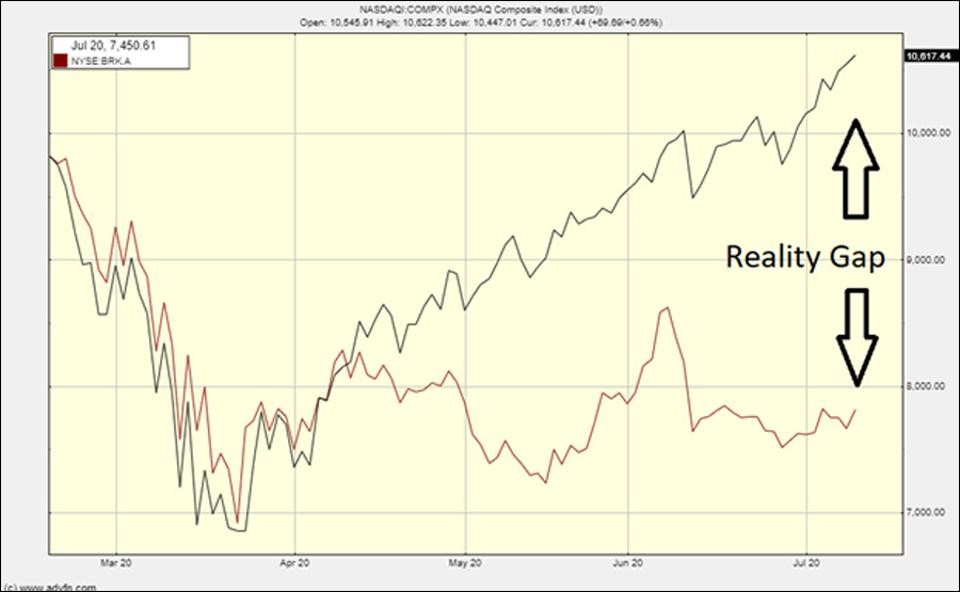 The Nasdaq and Buffett. Is there a reality gap? Source: Forbes

In the words of Neo from The Matrix, ‘Whoa!’

It’s clear that an ideological battle line have been drawn. And what we’re seeing now is a rivalry develop between two different personality types:

Well, who is right? Who is wrong? And why does it matter so much?

If you’re looking for a good example to understand this psychological conflict, you really don’t have the look far. Kiwi company Xero [ASX:XRO] is the perfect poster child.

So far as I know, Warren Buffett has never done an analysis on Xero. It probably exists outside his radar. Still, it’s easy enough for me to imagine what the Oracle of Omaha would say: ‘Gosh, steer clear of this fancy tech stock! It is shockingly overvalued!’

Overvalued? Well, what does that mean, exactly? 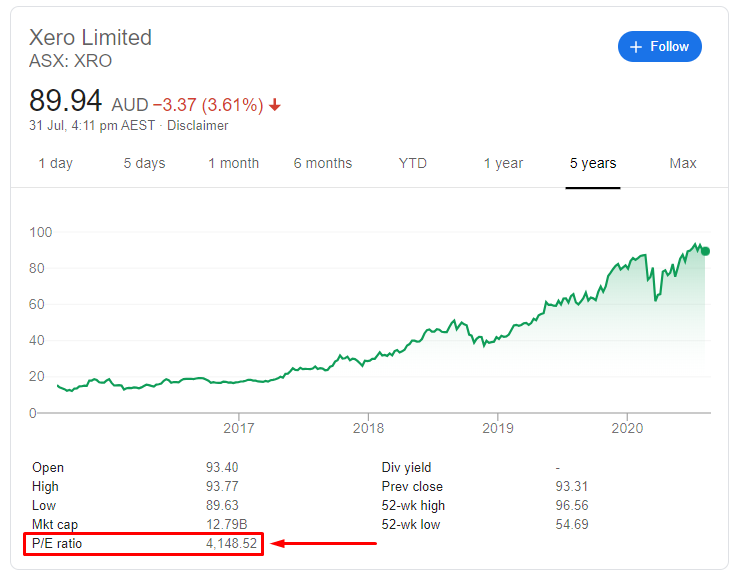 Here’s a simple shortcut to understanding value — the P/E ratio. Price to Earnings. It helps to think of this in terms of multiples:

So, yeah, Xero could be overvalued. Buy this stock right now, and what you’re paying for is future optimism. In fact, you’re actually paying for 4,148.52 years of future optimism. That price point is, quite literally, astronomical. Unless, of course Xero, meets this high expectation and dramatically increases its earnings!

It’s safe to say that Warren Buffett would never buy into an overvalued company.

His approach is folksy and simple. He only picks stocks that appear to be trading for fair value. This means doing his homework diligently, then seeking out good purchases at a discount. And if he doesn’t find sufficient value, well, he just doesn’t commit.

Of course, a growth investor who’s hungry for yield might roll his eyes at this approach. He might click his tongue dismissively and say, ‘Who the heck cares about the P/E ratio, man? Buffett is too old-fashioned. He’s missed out on so many incredible tech stocks. His track record for the past 10 years has been lousy.’

Of course, Buffett *appears* to have missed out on the hottest tech stocks — Facebook, Netflix, Google,.

His only high-profile tech picks seem to be Apple and Amazon — but he bought into them quite late. In the grand scheme of things, that’s not nearly enough to allow his portfolio to keep pace with the S&P 500 or Nasdaq.

On the surface of it, this verdict seems to be damning.

But, still, should we be so quick to dismiss the Oracle of Omaha? Does this sly old fox actually know something that the youngsters are ignoring?

A question of risk

Deep down inside us, deep within our souls, we each have a weighing scale. It’s the one we subconsciously use, constantly measuring the equation between fear and greed.

All too often, emotion takes over. And we are drawn to the possibility of a higher reward. Which means taking on more risk. And sometimes, we misjudge that risk. And that’s when it backfires. Spectacularly.

This is exactly what happened with the dot-com bubble. Here’s what I previously said about that event:

We kind of take it for granted now. But remember: the internet was cutting-edge tech back in the ‘90s. It encouraged sweaty palms, racing hearts and soaring imaginations. Through the wonders of dial-up modems and copper telephone wiring, anyone could connect to the World Wide Web. The potential seemed dizzying and endless.

Naturally enough, internet businesses exploded. Seemingly overnight, a flood of new companies went public. Some of these names are legendary, and chances are, you will feel a touch of nostalgia at the mention of them…

As a result, the Nasdaq index peaked in March 2000, hitting an astounding 5,047.62 points. The mood was jolly as employees and executives at dot-com companies became overnight millionaires. This juggernaut seemed unstoppable…

When the dot-com bubble burst, a lot of people were hurt. Badly. The devastation was total. But, amidst the rubble and ashes, one investor who didn’t feel the pain was Warren Buffett.

Why? Well, it’s because he had made it a point to steer clear of risky stocks. He eliminated any downside simply by exercising discipline and relying on common sense.

Of course, no one has a crystal ball. No one can say for sure when an optimistic bull market becomes a pessimistic bear market. But mental preparation is key.

Here at Wealth Morning, we don’t hide the fact that we’re value investors. And it’s not just P/E ratios that we’re looking at either. We want to understand debt levels, underlying assets, future direction, and a range of other fundamentals.

We aim to find wealth beyond the radar. That means studying the financial landscape, outlining the threats, and charting a path forward for you to take. So that you can make an informed decision and create a safer and more prosperous investment portfolio.

Do you want to learn more about the benefits of global investing? Then I encourage you to take a close look at our brand-new mentorship programme — Traders Academy — where we offer you one-on-one coaching and a VIP Access Pass to our live events. This may well be the best educational journey you ever take!

Forget tech bubbles. Forget following the crowd. Think for yourself. The best opportunities are those lying on the fringes on the mainstream. And we aim to show them to you…

PS: We’ve recently uncovered a tech stock with might offer you good long-term value. Take a look at our Lifetime Wealth Investor Premium Research to unlock this hidden opportunity today.