How does Warren Buffett Read the Market?

For Warren Buffett, selling is usually something he doesn’t think about.

Sure, he’ll sell if it turns out he was wrong about a business. He might even sell for an extremely inflated price.

The latter is far rarer.

But other than that, Buffett is a pure buy and hold guy.

Ever since he was young, Buffett understood the power of compounding — returns upon returns.

The longer you stay invested will add exponentially to your total gain.  It’s a very simple yet powerful idea.

So anytime Buffett sells something, it makes headlines.

As it happens, Warren recently made his way out of USG Corporation [NYSE:USG], America’s largest plasterboard manufacture.

Even an oracle can get it wrong

Like I said, there are only two reasons why Warren would sell. First is because he was wrong about the business. Second is for a price too good to pass up.

According to The Boston Globe:

‘USG Corp. agreed to a $7 billion acquisition by Germany’s Knauf KG, a deal championed by Warren Buffett as a way to exit an 18-year investment that suffered through bankruptcy and a bailout.’

Knauf offered $44 a share for USG. It represents a 30% premium for what it was trading for just weeks ago.

Some tried to paint this as yet another sign of an overvalued market. Knauf was offering a price too good for Buffett to pass up.

Yet it wasn’t the price that Buffett liked. Warren put his weight behind the takeover simply because he wanted out of the business. The Globe continues:

‘The deal enables Berkshire to exit what Buffett has called a “disappointing” investment.’

While USG was cheap in 2007–09, Buffett probably didn’t expect USG’s recovery to be so cyclical. 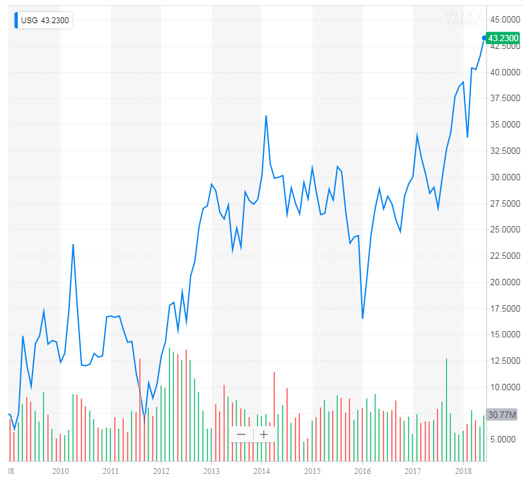 Their fortunes rest upon the US housing market. If more homes aren’t going up, then it’s tough times for USG.

Buffett would rather a business that can increase earnings regardless of macroeconomic factors. It’s probably why he was happy to sell out, take the cash and look for another wonderful business.

The too hard pile

Along with Buffett’s USG sale, punters are looking at the levels of cash the man holds.

‘Buffett’s company reported a record cash balance in its annual report– a massive stockpile of $116 BILLION in cash at the
end of 2017…most of it in short-term Treasury Bills.

‘…So…here is the most successful investor in modern history who:

‘2) Is stockpiling a mountain of cash;

‘3) Is now selling an asset that he would typically hold forever because another company made an absurdly high offer for the business.

‘It’s true that no one rings a bell at the top (or bottom) of any market.

‘But it seems pretty clear from Buffett’s actions that it might be a good time to take some money off the table and wait patiently for the compelling opportunities yet to come.’

I am of a different opinion however.

I believe Buffett holds so much cash simply because he can’t find anything compelling. Yes, I’m sure Warren might increase his activity if stocks were 50% lower.

But a key criterion for Buffett-style investing is to understand the business. To invest, Warren wants to be confident about where the business is heading in five to 10 years’ time.

For many businesses, Warren admits he has no clue. It’s why probably 98% of the stocks he looks at go straight into the too hard pile.

Not to mention, Buffett’s investable universe is extremely small. To move the needle, he needs to invest billions, which means he’s looking at a few hundred of the largest businesses in the world.

Unlike Buffett, you don’t have this problem. You can invest in billion dollar behemoths as well as tiny speculative small-cap stocks.

And with this as your edge, you should be able to find plenty of opportunities on the ASX and abroad.

Use size to your advantage

Volatility is opportunity. While you might see your positions move down 20% within a week. You can also see it move up far more than that over the same time.

In the small-cap world, volatility is a given. It’s just something you’ve got to live with.

The risky part, in large or small-caps, is not knowing what you’re doing. To be successful you need to properly understand the businesses you put your money in.

Find out how they make money, the trajectory of the industry and what management is doing to grow earnings.

The idea is to make calculated bets so that if you lose, you don’t lose much and if you win, your potential returns far exceed potential losses.

And because you can venture into far smaller growth companies, you can add a real boost to your potential returns.