I had a heartbreaking call the other week.

If you’ve been reading Wealth Morning for any length of time, you know how we feel about New Zealand’s residential property market.

Mischannelled investment by speculators and hobby landlords. Market failure in the form of locked-up land, high build costs, and a dire shortage of affordable homes in the big cities.

Generally, we support the operation of the free market. Except when it fails. Which is why we have a government.

So you’d expect taxpayer-funded officials to get to work. Look at restrictive regulations in the building industry — tax, competition, and labour. And the supply of housing itself.

Instead, they’ve made it more difficult to be a landlord, putting in a raft of new rules and tax consequences. And they have done nothing to address the key lack of supply. Even when the government is in a position to borrow at an interest rate of around 1.3%.

We’ve suggested before: build homes in a Singapore-style model. Sell them or rent them en masse. Float half the enterprise on the starved NZX.

Victims of the housing crisis cannot borrow at 1.3%. They’re paying as much as 365%!

I spoke with Sue Eggels of CAP NZ — Christians Against Poverty. Her organisation helps support people who find themselves pushed into debt despair.

‘The very high cost of housing, especially in the larger cities, is driving people to desperation. In high-need areas of South and West Auckland and Hamilton, our debt coaches are booked 3 months ahead.

‘Such high housing costs mean that most families need Mum and Dad both working. If someone loses their job or gets sick, things can fast unravel.

‘Once people get into debt and default, they cannot access finance at anything like the rates you might see on a home mortgage or even a typical car loan. They get pushed into using fringe lenders. Some of which have extremely high interest rates, as well as huge late-payment charges.’

Sue gives the example of a client who needed to borrow $450 one week to cover essential living costs:

What was most shocking was the practices of some of the lenders. Including one company that added a $20 ‘admin fee’ for calling to enquire about your loan balance.

What help is available?

Sue’s organisation provides free debt counselling. The CAP team builds a budget prioritising clients’ expenses, such as housing and food. And they negotiate hard with creditors to achieve repayment plans that are fairer and more sustainable.

CAP also provides practical support in the way of an account, through which clients repay their creditors. They also offer long-term support to get people through what can be a dark, lonely, and empty time.

Often, a high-interest debt can occupy years of a person’s life. It can strangle their ability to get ahead financially. Or provide effectively for their family.

CAP has successfully lobbied on amendments to the Credit Contracts and Consumer Finance Act. Helping to achieve a lower cap on proposed maximum interest rates — something Sue believes is a ‘big step in the right direction.’

The Salvation Army also has a community finance programme. Providing small no-interest loans to certain qualifying people, as well as loans of up to $5,000 at a rate of around 7%. But these loans cannot be used for debt consolidation.

If you’re reading Wealth Morning, you likely have a portfolio of investments. A home that is paid off. Or with a mortgage on interest rates below 6%.

Many, many people are not so lucky. Especially those on the other side of the housing divide. Or shut out from conventional lending.

Housing is too expensive

The 16th Annual Demographia International Housing Affordability Survey: 2020 found that every major NZ housing market was ‘severely unaffordable’. On average, housing in this country was seven times the median income.

In 1987/1992, affordability was on par with other developed economies. 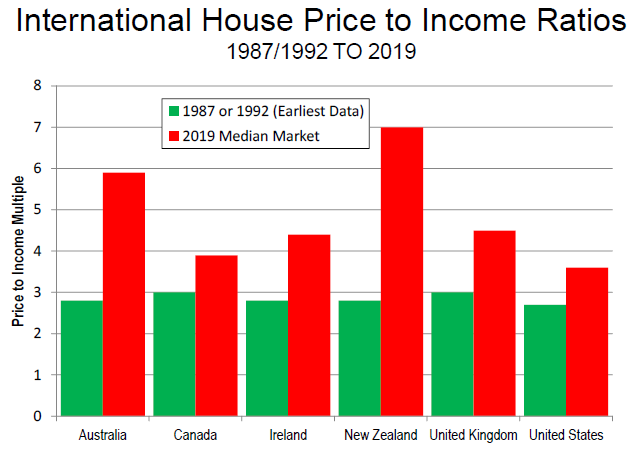 With housing being seven-times the median NZ income, it is little wonder that those below the median are going to struggle. They’ll find themselves in vulnerable, financially dangerous situations. Prone to predatory lenders.

But we are in an election year.

No major political party wants to see house prices fall. Which would be exactly what happens if supply gets increased. Or demand gets decreased — especially by containing migration at more sustainable levels.

Because a sufficient majority of the voting population are homeowners. Not susceptible to 365% interest rates.

That’s serviceable at 3.5% or so. But periods of low interest rates, like as we’ve seen in the ‘60s, can soon turn on inflation — as emerged in the ‘70s and ‘80s, when rates reached double digits.

So, home prices must be kept up. And landlords need yield. Which means higher rents. This is unlike share investors, where yield comes via company earnings and dividends.

How can you support CAP?

CAP is one of the few organisations out there helping those who fall through the cracks in this misshapen economy. It helps people restructure and pay off toxic debts. And counsels them through the stress and complexity.

They are looking for people willing to make a donation — or better yet, become a regular supporter by being a ‘Life Changer’.

$105 a month will support one family out of debt.

For families who do leave CAP debt-free, 91% of them stay debt-free.

As CAP is a registered charity, you can claim a third back on donations made before March 31, if you’d like to do so this financial year.

For more information on CAP’s impact and outcomes, read their 2019 Impact Report here.