Some years ago, before I left New Zealand, I went to a breakfast event with Sir John Key at Eden Park.

They choppered him into the field. Moments later, he was on stage telling us that a stadium this size left the country for Australia each year.

Perhaps it wasn’t the whole truth. Large numbers of people also come to New Zealand from around the world in search of a better life. Or lifestyle.

The world has changed. According to the UN, international migration is down 27% since Covid. Larger source countries to New Zealand, like China and the UK, also face difficulty in transitioning funds and recessionary impacts.

Generally, when you look at movements of people around the world, there are a few clear trends.

People leave authoritarian and intemperate countries. They go to more free, fair, and temperate ones.

When a poorer region sits next to a wealthier region — for example, Mexico and the US, or Eastern and Western Europe — net traffic tends to go one way. Though looser immigration settings play a role too. 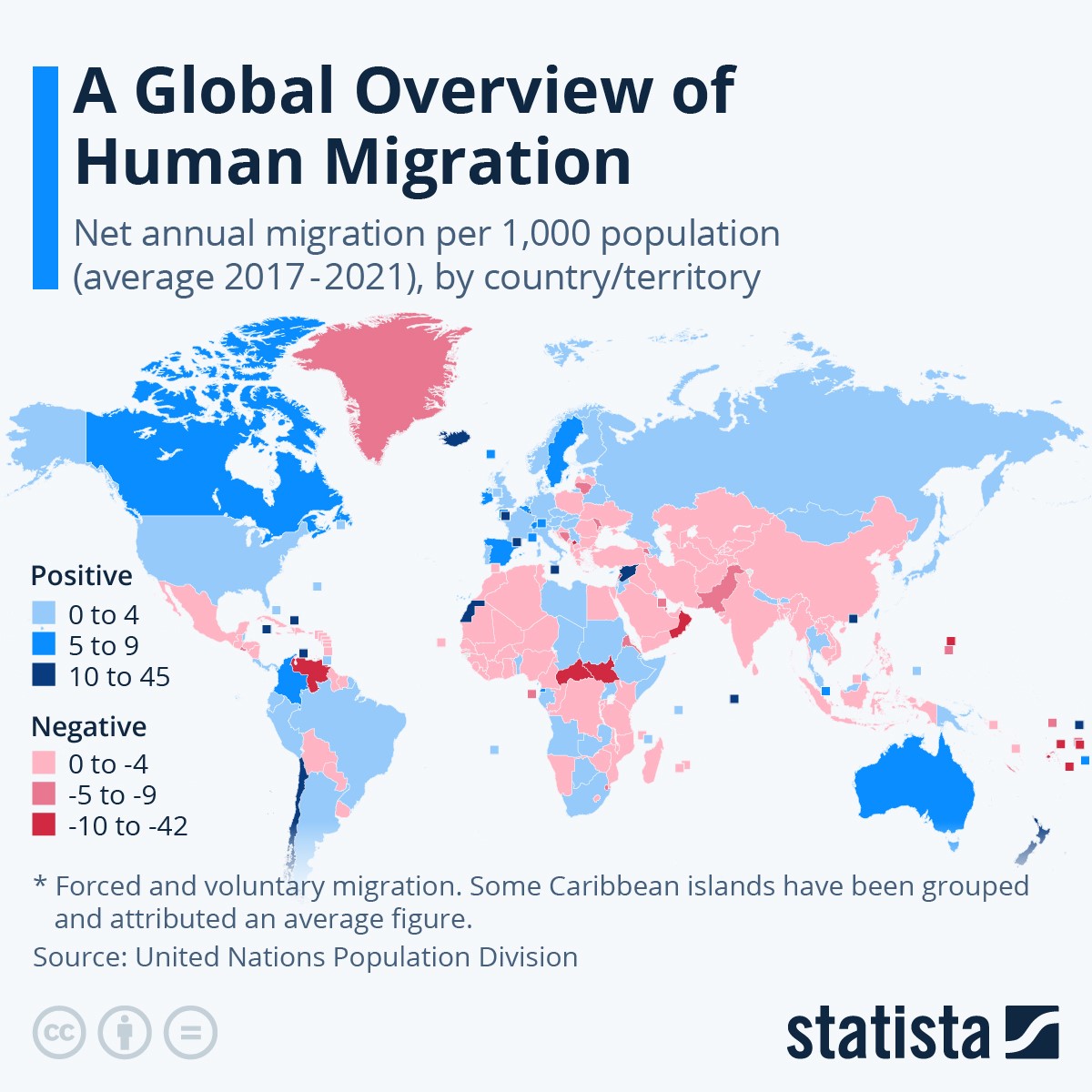 As the map shows, the North Island of New Zealand has seen high levels of net migration. (The South Island remains our best-kept secret).

This has a significant bearing on asset prices, particularly home prices.

But it’s not the main factor. Mortgage rates play an even greater role in that market.

Further, since 2022, the country has seen negative net migration. In the year to September 2022, we lost 8,400 people, according to Stats NZ.

Is the grass really greener elsewhere?

I hear of many younger people wanting to leave New Zealand now. For larger-scale opportunity and/or more affordable housing.

My children (though only 15 and 10) tell me they would like to leave New Zealand.

There is always the perennial desire for people from a small country to do their ‘OE’ — overseas experience.

What is often missed is that, on top of a good lifestyle, New Zealand does offer some unique benefits to investors.

There is no capital gains tax. And there is no inheritance tax.

I was recently in touch with someone from my university days who built a very large business. By the time he was looking to sell, he was living in Australia and in danger of falling under their capital-gains regime. Even though the business was largely New Zealand-based.

Had he not returned to New Zealand, he would likely have had to pay a large sum on the proceeds of his business sale to the Australian Tax Office.

Perhaps some of you reading will say, ‘Well, this is reason why there should be taxes on capital gains!’

The trouble we’ve had in the past is that much of that capital ends up in housing and other property, contributing to very expensive roofs for many Kiwis.

We need to get investment incentives right. But there’s another area that’s even more concerning.

When democracy and fairness are in danger

Despite all the attractions here, there appears something afoot that is more pernicious than expensive housing and lack of scale. Political ideology.

The perception of the country being a liberal democracy open to all is eroding:

All this contributes to a sense of unfairness:

We see some of these concerns being raised in other parts of the world too. Yet in a small, open democracy, certain vocal lobby groups are apt to capture the narrative. Particularly when many on their side also work in the media, have an outsized voice, and find their way into government roles.

Clearly, at the extremes, some of the ideologies being encouraged can be damaging to families, livelihoods, and wealth. Mostly they are perceived as unfair. That’s what angers people and drives them away.

But unless you have someone gain widespread support that presents prosperous pushback — I’m seeing Giorgia Meloni in Italy, or Ron DeSantis in Florida — there is the risk that ideology, however irrational it may seem, will continue to gain outsized influence.

Here at Wealth Morning and Vistafolio, we are investors in the global markets.

For our Wholesale Clients, we assist them to set up brokerage accounts that build assets in various parts of the world — from Europe to the US; from Australia to Singapore.

Their wealth is no longer concentrated solely in New Zealand. Diversification is the one free lunch in finance, and here we provide a seasoned meal.

In certain cases, the level of investments in key countries and/or the income produced, would allow the owners of those accounts to readily obtain a visa to reside in those countries.

While New Zealand remains one of the most free and peaceful countries on the globe — and it’s a country I love — I’ve also never seen this level of concern over its democracy before.

Democracies are delicate. Once captured by irrational narratives and embedded groups, they can change fast. You only have to look at world history to see examples of this.

Investing gives people options. And investing in equities spreads those options beyond a small, overpriced, and fragile property market that looks set for some major challenges ahead.

If you’re concerned about where to put your wealth, and you could qualify as a Wholesale or Eligible Investor, please get in touch today for a no-obligation consultation.

This article is general in nature and should not be construed as any financial or investment advice. Vistafolio services are only available to Eligible Investors and Wholesale Investors (not to Retail Investors) as defined in the Financial Markets Conduct Act (2013).