One technological breakthrough changed my life more than any other. And likely yours too. In a most meaningful way.

It was the advent of the personal computer.

I began using the Apple II as a kid in the 1980s. Followed by Dick Smith’s System 80 — of which my parents were one of the first to buy in our small town.

I learnt to programme in BASIC. Record my pocket money on a spreadsheet. And write letters on the computer. 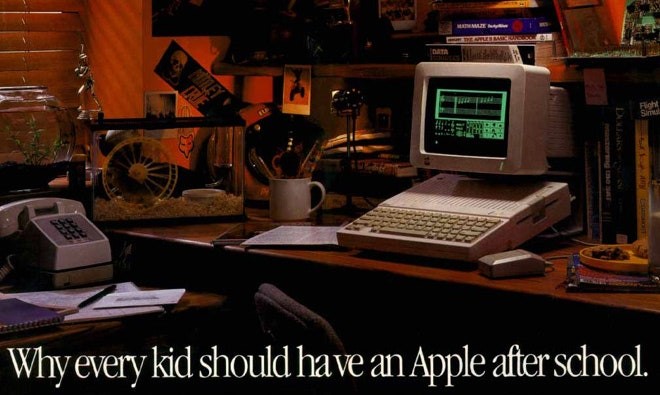 As with every new breakthrough, though, there was also a downside.

Before devoting much of my spare time to a screen, I spent a lot more time experimenting in the real world.

The classic birthday present — before computers — was an electronics or chemistry set.

I received a ‘Dick Smith’s Funway into Electronics’ kit. You could build a beer-powered radio, a Morse code communicator, or — one of my favourites — a decision maker.

Then there were even simpler pursuits. Such as setting a piece of paper on fire with nothing more than the sun’s rays and a magnifying glass.

The great thing before computers was that kids learnt to focus. Just like sunshine through that glass. Focus has the power to bring success and wealth.

Especially when applied to investing.

Now, with the steady advance of computing technology, it’s harder to keep focused.

I’ve gone from nothing but a circuit board in front of me and a glass of beer (to power the circuit board) to half a dozen browser windows, three trading screens, and a messaging app — all open simultaneously.

But I’ve learnt one thing. And that’s to focus on a core purpose.

If you want to wipe out wealth on an epic scale, failure to focus is a good way to do it.

Meta Platforms [NASDAQ:META], known primarily for Facebook, is down over 70% this past year: 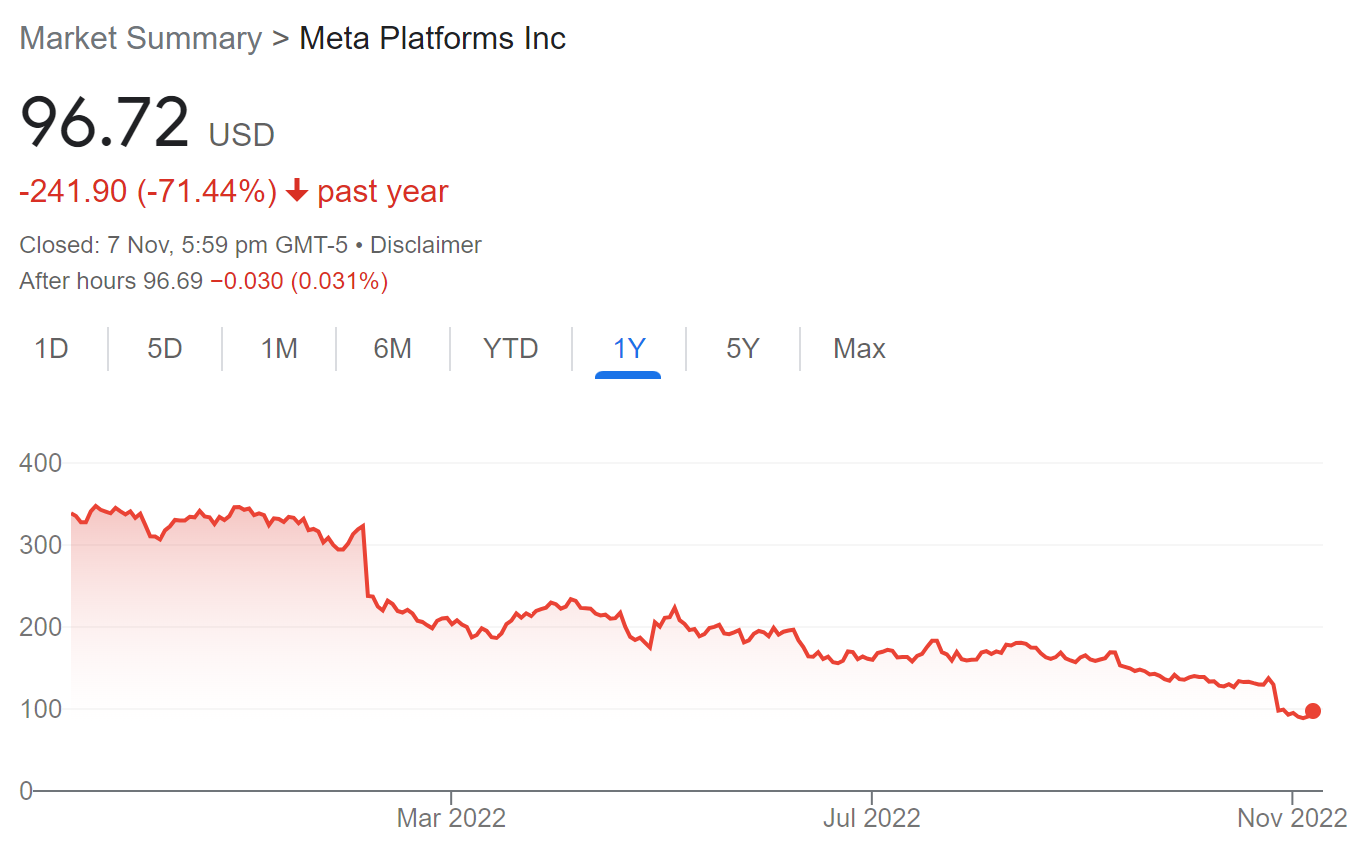 Founder Mark Zuckerberg owns 13% of the shares. But has 54% of the voting rights.

He’s been pursuing a mysterious vision in virtual reality known as the ‘metaverse’. Losses from this project have already hit $9.4 billion for the first nine months of this year. Now capital spending next year looks set to consume $39 billion.

Now, I’m often willing to look at a stock with expensive earnings if the company has a proven record of generating very high returns on capital.

For example, I’ve had an interest in Airbnb [NASDAQ:ABNB] for a while, since it delivers a near 30% return on equity.

But the issue with Meta is that the pay-off timetable for the metaverse appears unknown. Even tenuous. It’s not a case of, ‘Okay, if the shareholders bear $39 billion of capital spending, they could get around $12 billion back’. It’s more like we have to trust the vision.

Of course, big ideas and far-reaching visions are the stuff of technology and businesses that change the world. And Meta does have a clear plan to make money from commerce and advertising in the metaverse world they create.

Think Minecraft, Roblox, or Fortnite as the early basic contenders in this space.

And Meta also argues that the metaverse will be a space where many businesses can operate.

Yet it just seems so outside of Facebook’s existing focus. It’s not Apple moving computer technology into smaller devices. It’s not Microsoft moving from software to gaming. It’s a loss of focus.

It also appears driven by the frustration that Facebook is completely reliant on other platforms, such as the App Store or Google. So it’s time to create their own metaverse platform. 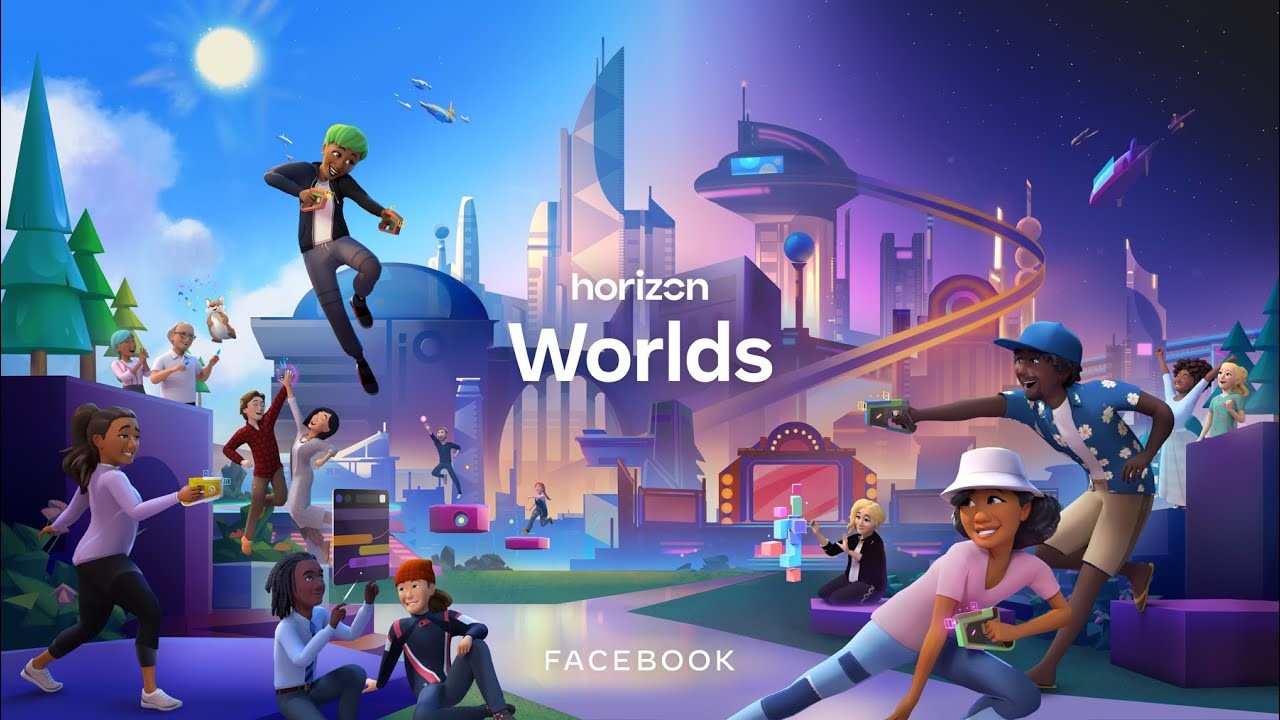 Horizon Worlds: ‘Where you can explore, play, and create in extraordinary ways.’ Source: YouTube

At this stage, you have to ask yourself, ‘Will the metaverse be the next big thing? And is Facebook/Meta the right Company to do it?’

If your conviction on those aspects is yes, then Meta right now with a P/E of around 9 could be a good value opportunity. Here’s Mark Zuckerberg’s plea to investors on a recent earnings call:

‘We’re taking on expenses because we believe that they’re going to provide greater returns over time,’ he said, adding: ‘I appreciate the patience, and I think that those who are patient and invest with us will be rewarded.’

I’m trying to keep an open mind. If the metaverse is the next ‘social media’ and this leads it, well, that could be something.

But all I see right now is pushback. From government. From users. And now from investors.

Do you trust Mark? I’m not sure he’s Steve Jobs. But, intrinsically, this market looks just a little too beyond the realities of life.

I tend to find the best opportunities are ‘hiding in plain sight’.

Not in elaborate places.

One thing we are 100% focused on at Wealth Morning and Vistafolio is this: finding 15 to 30 of the world’s very best businesses to write about and invest into for our wholesale clients.

And in doing so, helping people to become financially free through achieving growth and income over the long run.

One study suggests it only takes about 16 businesses to achieve over 90% of the benefits of diversification. And if those businesses are good ones at fair prices and you can compound their solid returns — well, you’re on the way to freedom wealth.

To learn more about the businesses we’re monitoring right now, I encourage you to look at our Quantum Wealth Report and become one of our premium news subscribers.

It’s only $1 to try the service for 4 weeks. If it doesn’t deliver value — you’re free to cancel before that, and that’s all it will cost you.

Focus today for success. And get the information and news you need to discern that focus now.