‘China is our friend.’

Believe it or not, it wasn’t that long ago that both Republicans and Democrats in the United States not only believed this to be true, but they actually bent over backwards to promote it. 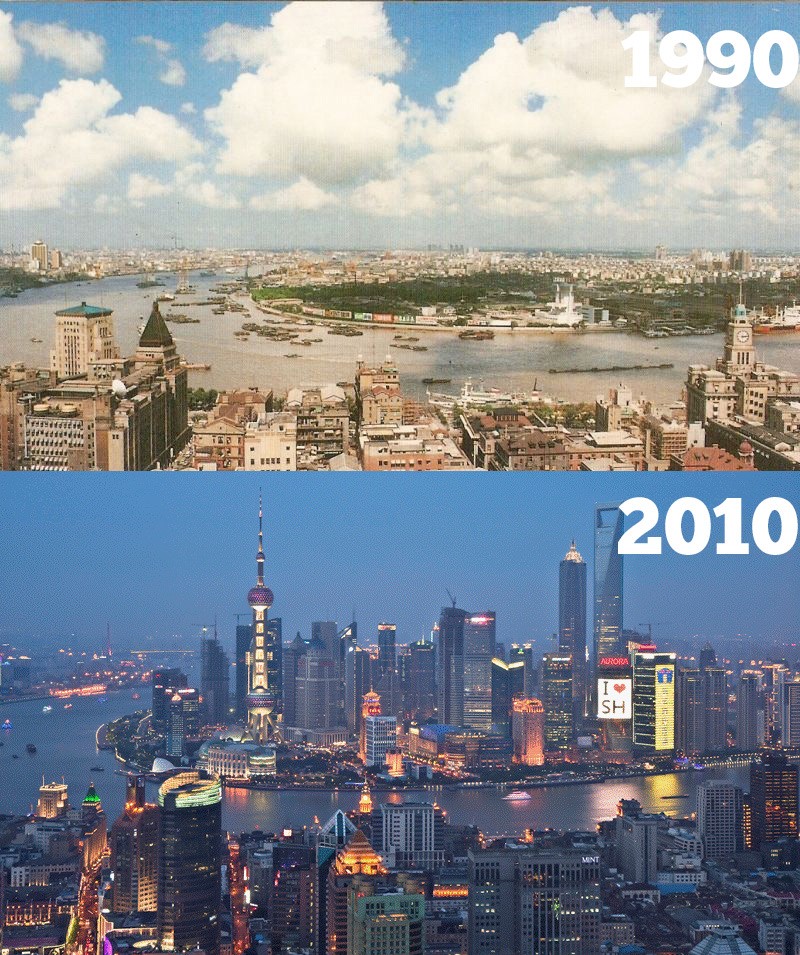 The transformation of Shanghai. Source: Oxfam

Of course, there were hiccups along the way.

What happened at Tiananmen Square in 1989 was a dark example of Chinese authoritarianism. They clearly wanted to have their cake and eat it too.

Still, from 1991 onwards, it was easy enough for the West to look past these problems.

You have to remember. This was a time of optimism. The Berlin Wall had fallen. The great adversary, the Soviet Union, was vanquished. And Francis Fukuyama proclaimed this moment to be ‘the end of history’ — where Western-style liberal democracy would prevail and create the most desirable form of government.

It not only seemed desirable but inevitable.

Today, it’s painfully clear that things haven’t quite worked out the way we thought it would. Nations like China and Russia have not only failed to democratise, but they have become even more ultranationalist and belligerent.

In addition, Donald Trump’s presidency has brought home one undeniable fact: America today is no longer interested in remaking the world in its image. It might actually be more practical to disengage. Focus more on strengthening the assets under America’s immediate control.

Remember the old saying — a bird in the hand is worth two in the bush?

Well, this has never been truer than it is now.

Of course, all this is theoretical. It’s still a work in progress. And no one knows for sure what the end result will look like.

However, one thing is certain: globalisation as we know it may be over. The cheerful enthusiasm of the 1990s has been replaced by a more cynical and competitive mood.

Going forward, we can expect less idealism in foreign relations. There will be more realism. More realpolitik.

The global decoupling will not be an easy one.

For example, Thomas Insights reveals that building an Apple iPhone requires individual components to be sourced from 43 countries across six continents. It’s a complicated spider’s web of assembly, shipping, and warehousing — which are all interlocked.

But look past the pain. Look past the inconvenience. As supply chains shift and reconfigure, a golden opportunity could be emerging. Speculative companies in the West could benefit as they race to fill the friendshoring gap.

In particular, we’re reporting on one small-cap technology firm in Australia that is already showing promise. Its stock price has soared over 1,000% over the past 5 years — and it occupies a very valuable niche that could be set for more speculative growth.

As we speak, the Company has just secured a patent for a cutting-edge product that could transform the computer industry. Is this a once-in-a-lifetime opportunity not to be missed?