He Saw Our Future Coming: What Can Investors Learn?

The editors at the Collins English Dictionary agreed, and they declared ‘lockdown’ to be the most important word of 2020.

And why not? It sums up the shared anxiety of billions of people, cutting across national and cultural boundaries.

Throughout it all, one thing became quite clear to me. For the first time, we may well be living at a point in history where there’s no mainstream agreement about, well, anything.

Source: The Journal of Public Space

Here is a sample of the controversies that gripped us back in 2020:

Just as the room for physical space has shrunk dramatically under Covid, so has the scope for public conversation and compromise.

Views have hardened. Attitudes have become entrenched. There appears to be no middle ground anymore.

Is this development something new? Something sudden? Or is it actually something we should have seen coming?

Alvin Toffler may well be the most brilliant thinker you’ve never heard of. He was so brilliant that he staked his reputation on being a ‘futurist’ — someone who sketched out the possibilities of the future.

In 1970, Toffler published a landmark book called Future Shock. The theme he explored was a striking one, and he defined it as the trauma of transitioning from an industrial society to a post-industrial society.

Toffler summed it up like this: ‘Too much change in too short a period of time.’ 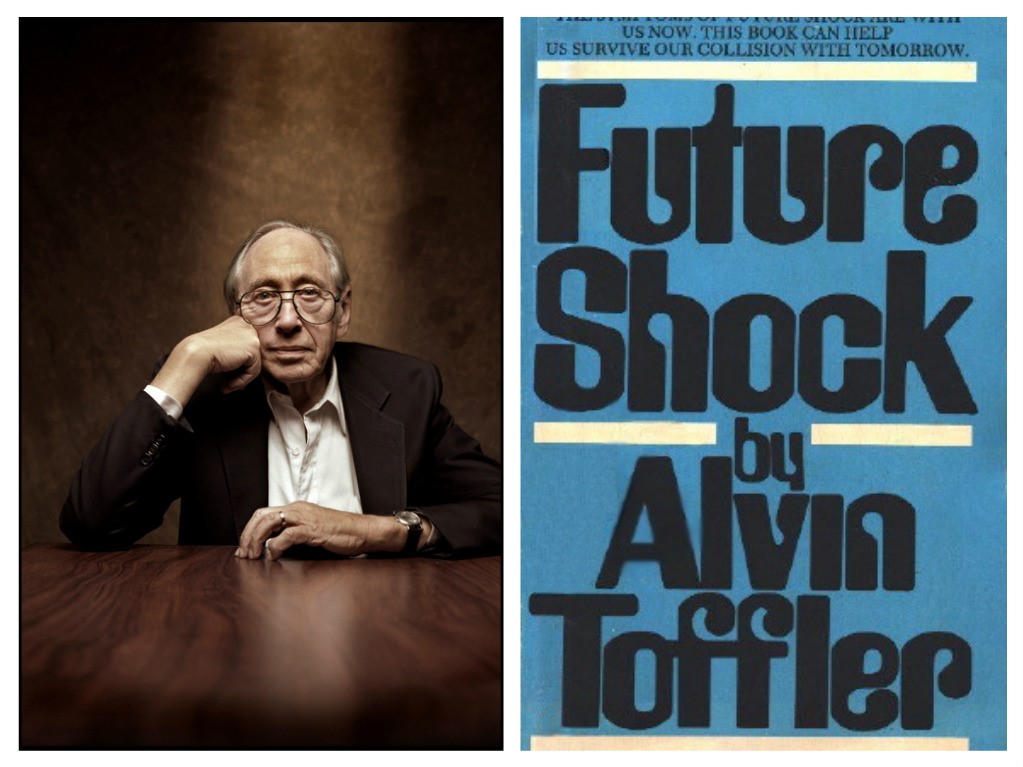 Source: The Times of Israel

Here’s a sample of Toffler’s predictions, which have all proven eerily prescient:

Where do we go from here?

Alvin Toffler passed away in June 2016. So he did not live quite long enough to see the upheaval of 2020.

But what if he had? What would he have made of Covid? How would he have interpreted the social spasms that the pandemic left in its wake?

For example, consider the airline pilots who have been displaced because of Covid. Seemingly overnight, their long and cherished careers have been pushed into irrelevance. They are now being forced to switch to new roles as Uber drivers or real-estate agents, even as they contend with the anguish of a disruption they did not expect.

Also, spare a thought for the younger generation. They’re now graduating with diplomas and degrees that may already be outdated, venturing into a job market that’s far more fluid and volatile than ever before. It’s a bewildering experience.

Throughout the world, it’s pretty much the same story. Economic hardship. Psychological distress. People still struggling to define and redefine what this new normal looks like.

But is it all bad? Is it all gloomy?

For those of us who survived 2020 and 2021, we might find hope in 2022. There could be renewal and reconciliation. Light at the end of a dark tunnel.

Humanity is, if nothing else, resilient and adaptable. And we are already coming to terms with this new reality — and finding positive baby steps forward.

The world hasn’t ended. Not yet. It’s just in the midst of another transformation. The next page of history is being written right now, and the ride could be bumpy. But the final destination might just be worth it.

In this time of post-industrial disruption and upheaval, we’re already seeing remarkable opportunities emerge to preserve and grow wealth.

It’s taken us a lot of time and research — but we’ve identified several life-changing trends that could be critical for our financial future.

We’re revealing the details in our Quantum Wealth Report.

No doubt, we are experiencing a fateful turning point for the stock market.

Embracing this trend requires courage and wisdom — and I believe there’s never been a better time to capture the potential of what’s to come.