Crash and Burn: The Truth About Bitcoin Millionaires

Let’s face it: As human beings, we aren’t usually the best at judging risk.

In fact, our feelings about what’s dangerous and what’s safe can be wildly inconsistent.

The difference between the two is so vast, they’re not even comparable.

Yet the human perception of risk can be distorted by personal bias.

There are folks out there who are terrified of flying — but they will think nothing about driving fast once they get their hands on a steering wheel. 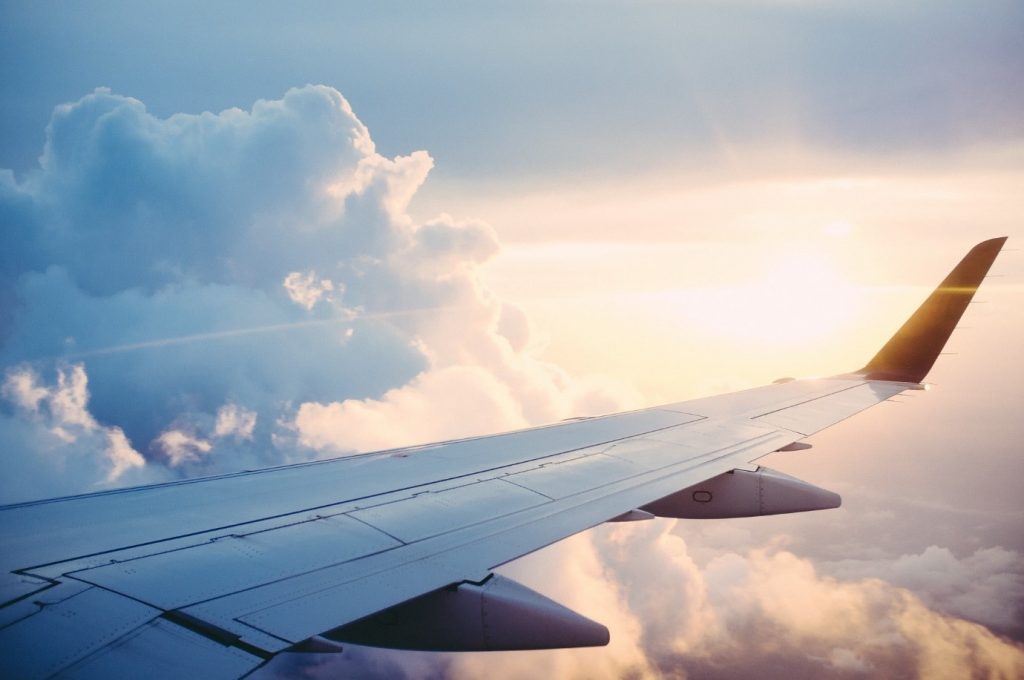 This is a paradox. A self-fulfilling prophecy. In trying to minimise their risk profile, they have actually increased it manifold.

This is what psychologists call cognitive dissonance. Our perception of reality is malleable, like putty. We rationalise what makes sense to us, and we reject what we don’t want to acknowledge. Often to our detriment.

The thrill of the chase

Yet the stats reveal how elusive the feverish pursuit of profit actually is:

Now, these numbers may sound abysmal.

But therein lies the contradiction.

For the global economy, history has repeatedly shown us that there have been more good days than bad days. In other words, we have more cause for optimism than pessimism. 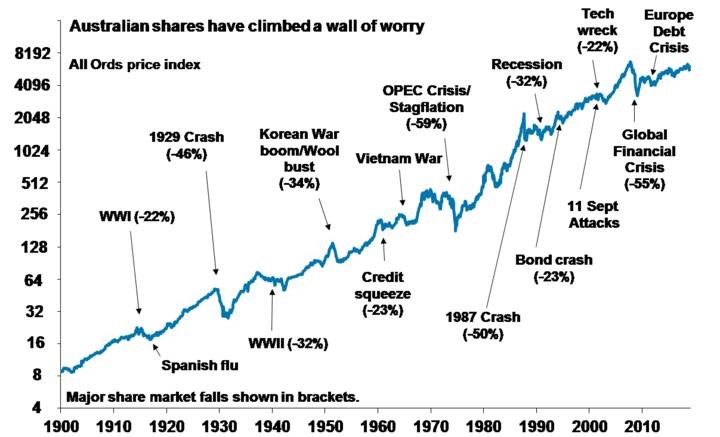 Yet, despite this long-term positivity, why do investors stumble so often? Why has rising markets not translated into slam-dunk success for everyone?

It can be baffling. But here’s the truth: Even in the best of times, human beings often misjudge risk. They mistime it. They misprice it.

The greed and fear dynamic

What’s the biggest speculative bubble of this generation?

There’s an argument to be made that cryptocurrency takes the top spot.

The frenzied pursuit of Bitcoin is a case in point: 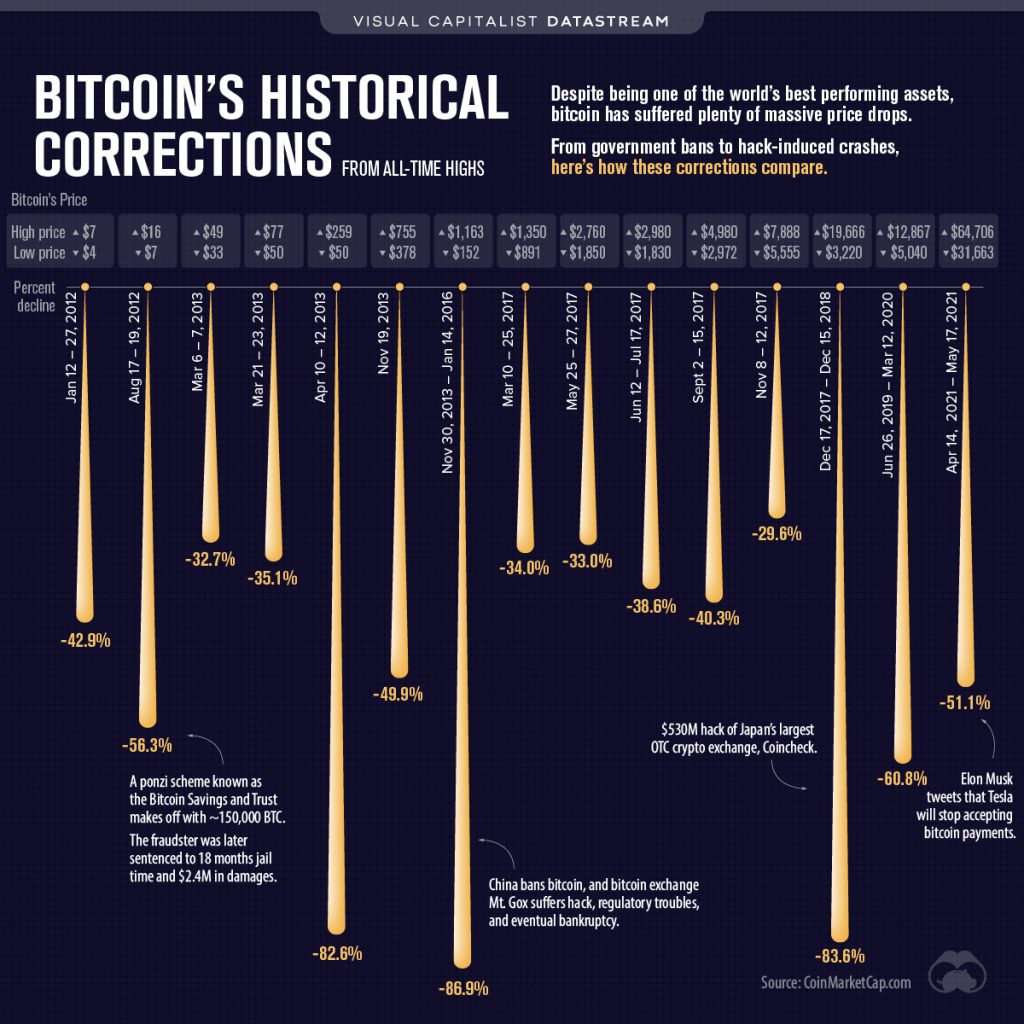 To date, there have been over a dozen separate fear events for Bitcoin.

The reasons behind them can seem random and haphazard. Take your pick — Ponzi schemes, Chinese crackdowns, unruly tweets.

Given the frequency and depth of these crashes, the financial pain is not to be underestimated.

Of course, Bitcoin millionaires do exist. These are daring and aggressive investors with a high tolerance for risk. They were fortunate enough to capture crypto’s potential at the beginning of its life cycle. That’s before the general public had even heard of Bitcoin.

But here’s the unfortunate truth: By the time you hear of someone becoming a millionaire by investing in some magical asset, chances are, it’s already too late. If you follow blindly, you risk getting burned. Badly.

So, given the fact that our human impulses are so prone to distortion, what’s the best way forward?

I believe that it comes down to three things:

We should stop thinking of investing as a ‘get-rich-quick’ scheme.

Instead, we should develop a ‘get-rich-slowly’ strategy.

For example, let’s consider what would happen if you had the patience to invest an imaginary sum of money in the S&P 500 and hold it for 40 years: 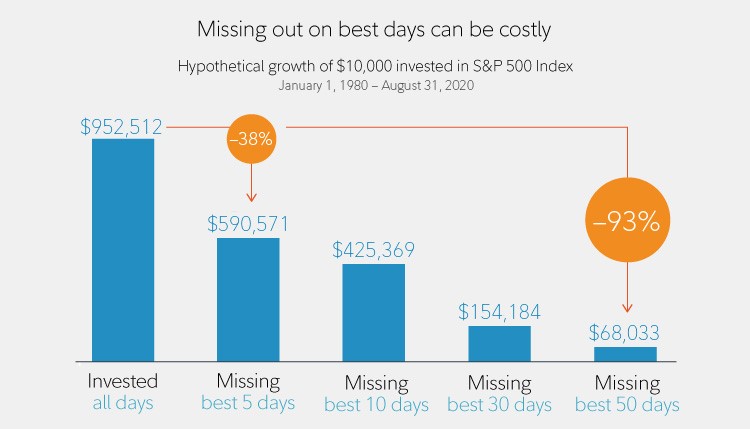 If you had stayed invested throughout — without speculating, without making greedy mistakes — you would increase your money by a factor of 95. The compounding effect is incredibly powerful.

So, if you’re in habit of compulsively buying on Mondays, then selling on Fridays, you’re actually harming yourself much more than you know.

Think of it as death by a million papercuts. You may not feel it at first, but you’re really bleeding yourself dry in the long-run.

Your investment journey is not a sprint. It’s a marathon. And it must be defined by three critical decision points:

At Vistafolio Wealth Management, we can help you if you qualify as an Eligible or Wholesale Investor.

Our mission? To seek out global assets that we have the strongest conviction in. Buying and holding them for the long-term. Protecting and growing wealth in a measured way.

We are sceptical of wild trends that rely on gambling. Fashions come. Fashions go. We prefer to invest in companies with solid track records, strong management, and hard tangible assets.

That’s why we like businesses rooted in property and infrastructure.

This sensible approach has served us well.

For more information 👉 Click here to get in touch with us.

Our philosophy is clear and pragmatic. It’s about using a wholesome strategy that will stand the test of time; helping you reach your destination safely and smartly.