Home » Stock Market » a2 Milk [NZX:ATM]: Is This Kiwi Rock Star Still Worth Investing In?

The a2 Milk Company [NZX:ATM] is a Kiwi brand founded in 2000 by Dr Corran McLachlan and Howard Paterson.

They first rose to prominence when they investigated the effects of the A1 β-casein protein. Their research drew an apparent link between the protein and potential health problems.

Generally speaking, standard milk on the market contains a large proportion of both the A1 and A2 β-casein protein. The a2 Milk Company has narrowed this down by using a patented genetic test to identify cows producing the A2 protein.

In theory, this allows the company to market milk containing only the A2 protein. However, to be pedantic, it should be noted that there have been studies that show there are still traces of the A1 protein within their product, but a negligible amount.

Despite this, a2 Milk has leveraged its unique reputation to reach rock-star status. It posted a stock return of over 1,000% between January 2016 and July 2020. 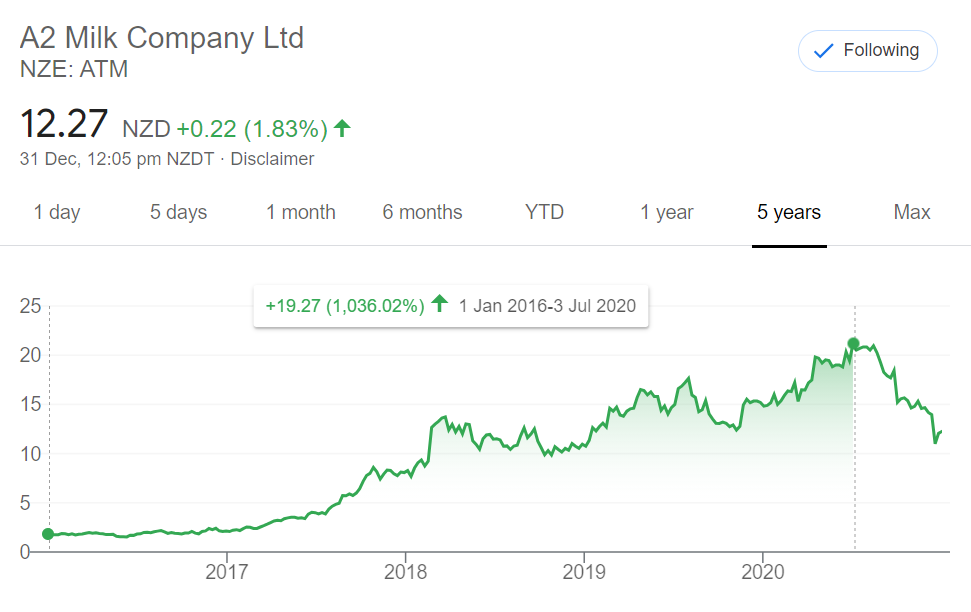 Certainly, it’s proven to be a dream run, but lately, the company appears to have hit a speed bump.

Currently, we have seen two large drops in the a2 Milk share price since August 2020, coupled with a steady downward trend. Economic and political headwinds appear to be hitting the company hard.

Is a2 Milk still worth investing in? Are the company’s best years already behind it? Or is there still value and growth to be found here?

Sign up for our Lifetime Wealth Investor Premium Research, and you will receive
this analysis report and all our other reports as a FREE bonus