Why the Silent Majority Can’t Afford for Trump to Lose

Politics in America is visceral. Angry. Overcharged. As if the president alone has total power and can make all the difference.

The reality is that US presidents have less power than you may think. Geopolitical guru George Friedman points this out in his latest book — ‘The Storm Before the Calm.’

US presidents are governed by the Constitution. Which designed the presidency to be one of the world’s least powerful heads of state. Domestically, Jacinda Ardern may have more power in New Zealand. Or Boris Johnson in the UK.

To get anything done at home, the president must convince both House and Senate. Then gain support from 50 sovereign states. While keeping the Supreme Court off his back.

It reminds me of a Labour Party leader in New Zealand. Who remarked years ago that after finally getting their hands on the levers of power — they discovered they weren’t connected to anything!

But leaders and even presidents do have some powerful levers through their policy machinery. And it’s those levers that investors — those concerned about their wealth — should look at most closely.

What would it mean for global markets if Biden wins in November?

Joe Biden came out with some fighting talk at the Democrat convention. ‘United we can and will overcome this season of darkness in America,’ he proclaimed.

He does seem a pleasant chap when compared to his lightning-rod nemesis. But as an investor in the US and several global markets, let’s be frank. There’s been no season of darkness in this department. The board has been lighting up since the Trump presidency in 2016: 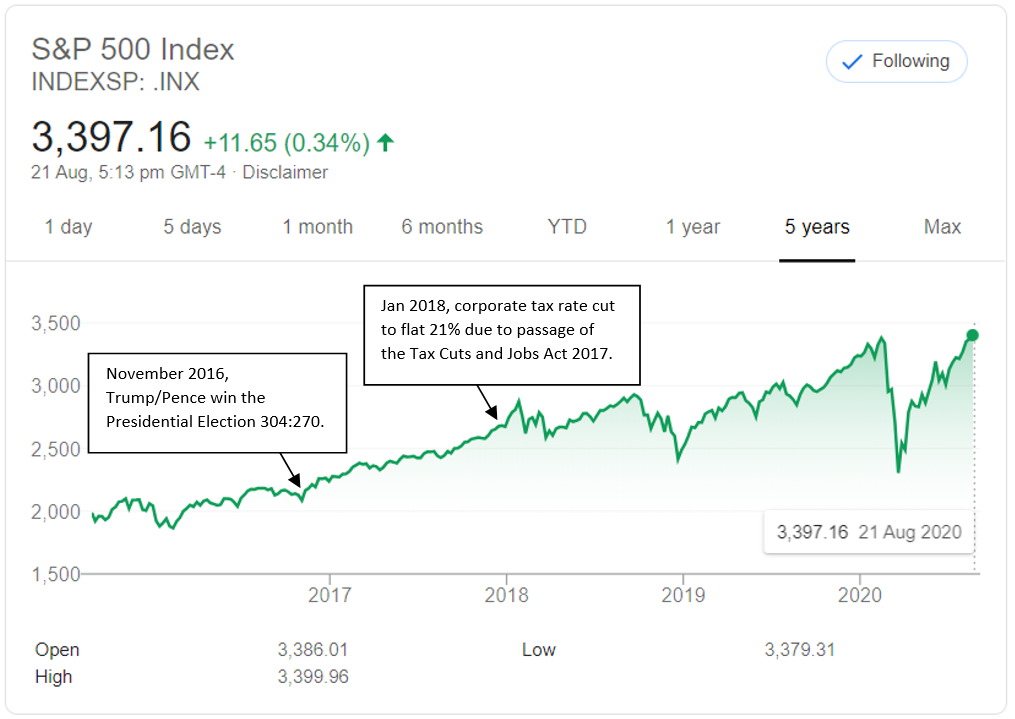 A reduction in corporate tax, reduced business compliance, and a desire to bring back manufacturing to the US has stoked capital investment into the markets.

Of course, it’s not been a moonshot bull market. In late 2018, global events such as Brexit, the Chinese economic slowdown, and a heightened North Korean threat impacted. Then, in March 2020, the coronavirus pandemic sell-off cut its deepest.

Yet, even during COVID-19’s drawdown, the NASDAQ has staged one of the fastest recoveries ever. Capital is proving conductive.

Because capital and vis-à-vis equity markets seem to like Trump. Or at least the approach of his investment-friendly administration.

But, as we know, capital investment can be flickering.

Through much of the 1970s and 1980s, it was deeply constrained. Some of the reforms from the Reagan administration helped to open up the wider rivers available today.

The problem with Biden and the Democrats is they seem less capital-friendly.

Capital is like a rose garden. It needs the right amount of sunlight and water. Reduce the favourable circumstances and you end up with the problem that Reagan (and Roger Douglas) worked so hard to resolve in the 1980s.

What does this mean for the ordinary person?

As the US withers, the global economy could follow.

At the same time, potential taxes on investment gains reduce the desire to invest. As does higher income, capital gains and inheritance taxes.

First, the value of your retirement plan could be hit

A long slow drawdown will erode gains. And, in some cases, those gains will be subject to higher taxes.

That means you’ll need to work harder to achieve the same result.

Americans for Tax Reform indicate: ‘An increase in the corporate tax rate would directly raise the cost of utility bills in all 50 states.’

By many measures — such as homelessness, income, and opportunity — America is not as unequal as many countries. Surely having a home is one of the primary tests for how an economy works to look after its citizens:

The US scores better than other developed countries. New Zealand has more than 5x as many homeless people per capita. It has a left-wing government pursuing high corporate tax rates and rampant migration. A Democrat dreamland struggling to afford equitable growth.

So, when you drill down to the numbers, it does seem that the silent majority of hardworking Americans — preparing for their future independence — cannot afford a Biden win.

Not at this critical juncture.

And people will say one thing. But vote on how their wallet feels.

But it’s not the president’s wallet that counts. It’s the deep purse of the entire administration.

For Biden to win and fully tax, he’ll likely need a Democrat Senate too.

Such a result could sure make for some red angry politics.