Golden, Colorado is home to two important institutions: the Coors Brewery…and the Colorado School of Mines.

One of our sons is here enjoying both of them; we came to see him yesterday. 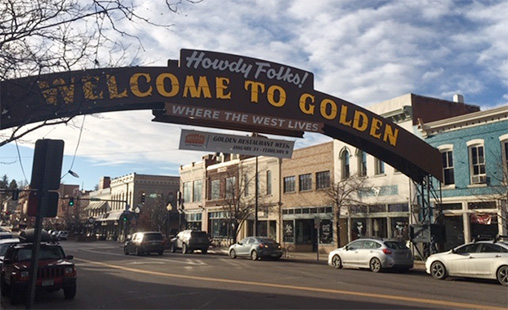 Golden in the morning

Three of the passengers on the plane, one Chinese, two American, were wearing face masks.

Were they afraid of getting the Wuhan virus? Or afraid of passing it along to others? We didn’t know. But every time someone coughed or sneezed, we got nervous.

If you want to take an adventure vacation at a bargain price, it’s time to head east. According to our sources, hotels, airlines, and restaurants in China — all are being marked down fast.

A round-trip from New York to Beijing, normally about $2,500, is now on sale for $495. The malls are quiet. Hotels are said to be emptying out. Restaurants are desperate for customers.

Tourists are leaving the country. But so are the Chinese, leading to a further syndrome, a ‘surge in anti-Chinese racism.’ At least that’s the word from News.com in Australia, which reports that the Wuhan virus…

‘So now people who perhaps have existing prejudice suddenly have an excuse to act out with racist behaviour and remarks.’

In South Korea, a number of businesses are refusing to serve Chinese customers, placing signs in windows reading, ‘No Chinese allowed.’

‘Where the hell does this lead?’ we asked a friend, channeling Donald J. Trump and curious about the coronavirus.

‘You never know,’ was the safe reply. ‘I mean, the Spanish Flu, after WWI, wiped out as many as 100 million people all over the world. If that happened today, the death toll might be 500 million. Who knows?

‘We’re better at treating diseases. But viruses move fast. And sometimes, there just aren’t any good ways of treating them. We have antibiotics against bacterial infections. We still can’t do much against viruses. In the Middle Ages, the Septicemic plague killed almost everybody who got it. And there’s still no treatment.

‘The Spanish Flu killed the healthiest people. Young people. With good immune systems. The virus captured their immune systems and turned them against their hosts.

‘Today, we have much more developed public health systems. And many more ways of controlling people. In some airports, already, you have to walk through a heat detector, like a metal detector, but it tells when you have a fever. Then, they take you aside for an examination.

‘And now, the government can fight a virus as if it were a war. It can lock down airports, cities, states…close borders…and outlaw public gatherings. Elections could be postponed. Gas stations could be closed to prevent travel. I’m not saying they will do that. But they could. And if the virus were dangerous enough, a lock-down would be supported by most people.

‘But people can’t stay locked down for long. They need food. So, the shelves need to be stocked. And people need to go to the supermarket. So, they need gas…and the delivery trucks need to roll.

‘That’s why investors are nervous. Or, they should be. Nobody knows whether this virus can be contained. It is said to kill three out of 100 people who get it. So, if 100 million Americans got the disease, there would be 3 million dead. Not a big deal in terms of the survival of the race. But it could mean a big hit to sales and profits.’

Falling sales, falling profits? What would the Federal Reserve do? Only one thing — inflate!

But as we’ve been exploring this week, robberies don’t always go as planned. You map out a non-violent heist…and a quick getaway…and end up with dead bodies and hostages. Stuff happens.

Inflation is always and everywhere a rip-off. And it often spins wildly out of control.

Like von Havenstein, you plan on a little inflation to help you through an emergency. The next thing you know, you’re printing 500 quintillion German marks.

How does that happen? Little by little. And then, all of a sudden.

Virus on the loose

Consumers also get a little edgy, too.

The Fed said on Wednesday that it would provide all the cash that consumers, businesses, and investors need. But in a real inflation, the amount of cash needed is infinite.

The world currently has more than $16 trillion in negative-interest debt. The U.S. stock market is near an all-time high, but approximately 14% of the companies, including some of the biggest, are ‘zombies’ — meaning they don’t earn enough to cover the interest on their debt.

The U.S. government can’t cover its expenses, either; the Fed prints up a trillion dollars a year to help.

And, oh yes, a killer virus is on the loose.

We don’t know what will happen, but we doubt a face mask will save us.

The Four Steps to an Unstable and Corrupt America

The Heart of the Nation’s Corrupt Money System

The Powerful Lever That Could Amp Asset Prices

On Juneteenth, A Conversation of Reparations

Property Boom or Bust: 5 Things You Must Know Before Buying Real Estate