The Aussie market is set to rally as we follow Wall Street up.

Boeing is still a sell. Tech stocks are a buy.

British MPs have taken a ‘No Deal’ Brexit off the table.

Is this the kind of information you want to hear?

Because it’s this kind of short sharp useless information Wall Street and the mainstream pump out.

Does it matter whether the Aussie market is going up or down? Not really. Does it matter that Boeing dropped 12% overnight when news broke of their second 737 MAX 8 plane crash? Probably not in the long run. And what good is it to know that British MPs took a ‘No Deal’ exit off the table? Likely none whatsoever.

Don’t get me wrong. Read the news. Read it from multiple sources.

But be cautious. Often the Street and the mainstream will suggest something that turns out to be completely wrong.

They got it wrong and made history!

Do you remember when Mark Zuckerberg found himself in front of congress?

Members grilled Zuckerberg about his business and why data was being misused. Many used it as an opportunity to further their own popularity. Take every chance to win a vote, right?

Anna Eshoo: ‘Was your data included in the data sold to the malicious third parties?’

Anna Eshoo: ‘Are you willing to change your business model in the interest of protecting individual privacy?’

Then here’s US senator Dick Durbin asking Zuckerberg whether he would share personal information.

Dick Durbin: ‘If you’ve messaged anybody this week, would you share with us the names of the people you messaged?’

Mark Zuckerberg: ‘Senator, no I would probably not choose to do that publicly here.’

As it happens the American people don’t ‘share’ their texts and emails with the government. Yet for some reason the government accesses this information anyway.

It was exchanges like these and the fury of the American people that would be Facebook’s undoing, so said the Street. The ‘Delete Facebook’ slogan picked up momentum. Yet it was really a case of a few with loud voices.

All it took in the end was a sign of slowing growth to confirm the view. And that happened shortly after in July.

Earnings were lower than expected, even though they were up 33%.

Facebook would make history. The compounding negative press pushed Facebook to the biggest one-day loss…ever. The stock fell well over US$100 billion of its value. 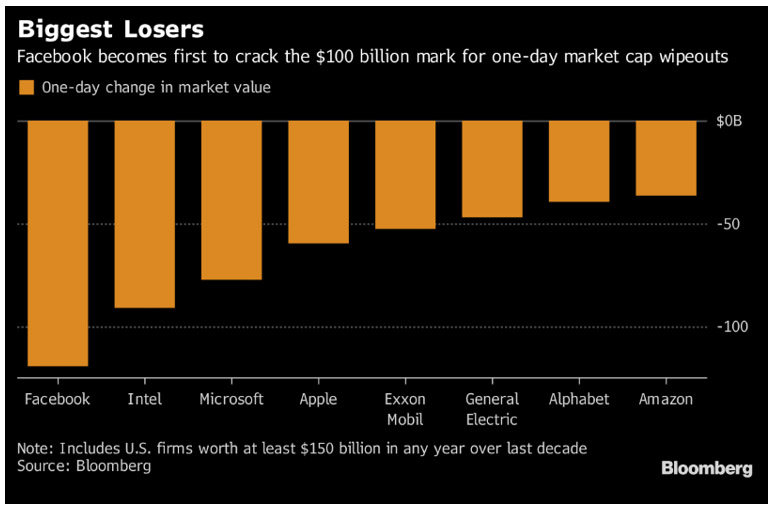 And of course, nobody paid more than Zuckerberg… 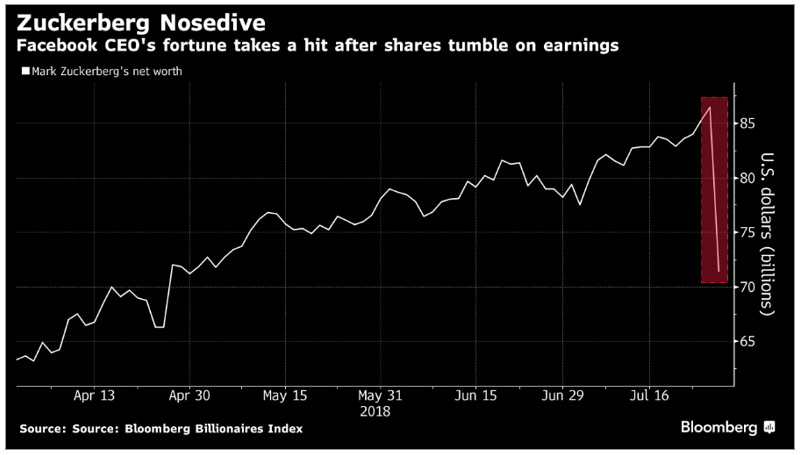 The Street patted themselves on the back. It was a good call, they thought. And the mainstream all echoed their opinions.

Yet look at the company today…

The stock is up almost 40% from its low last year.

In their latest quarterly report, Facebook saw almost three billion people jump across their ecosystem. Revenues were up 37%. Profits were up 23%, even though spending also increased 51%.

Now, Zuckerberg himself is talking about privacy and encryption for his social network. From South China Morning Post (SCMP):

‘Going forward, he [Mark] said, it [Facebook] will emphasise giving people more ways to communicate in truly private fashion, with their intimate thoughts and pictures shielded by encryption in ways that Facebook itself cannot read.

‘But Zuckerberg did not suggest any changes to Facebook’s core newsfeed-and-groups-based service, or to Instagram’s social network, currently the fastest growing part of the company. Facebook pulls in gargantuan profits by selling ads targeted with the information it amasses on its users and others they know.

‘…Zuckerberg plans to stitch together its Messenger, WhatsApp and Instagram messaging services so users will be able to contact each other across all of the apps.

‘The multi-year plan calls for all of these apps to be encrypted so no one but senders and recipients can see the contents of messages. WhatsApp already has that security feature, but Facebook’s other messaging apps do not.

‘Zuckerberg likened it to being able to be in a living room behind a closed front door, and not having to worry about anyone eavesdropping.

While this probably means less information for advertisers, it strengthens the relationship between Facebook and its users.

And that’s exactly what you want to see if you’re a Facebook shareholder. A small sacrifice now for a whole lot of gain later.

You want management to focus on the customer. You want them to strengthen the product. If Facebook was a castle, then Zuckerberg is digging a deeper, wider moat and filling it with great whites.

‘Zuckerberg said he is not currently worried about denting Facebook’s profits with the increased emphasis on privacy.

‘“How this affects the business down the line, we’ll see,” Zuckerberg said. “But if we do a good job in serving the need that people have, then there will certainly be an opportunity” to make even money.’

So what did we learn from the Facebook saga?

The Street and the mainstream are often wrong. They’re not only wrong in their predictions. They’re wrong in their ideas about how likely or unlikely something is to happen.

While you’re probably already cautious of the major outlets, I think Facebook is a great case study to learn from.

Read the news. Stay up to date. But form your own opinions. Don’t get sucked into ‘the story’ others are trying to sell.

With this in mind, you probably see right through Elizabeth Warren. She’s the democrat hopeful, looking for a shot at the title.

Recently she was playing it safe by attacking those who are unwilling to fight back. From Bloomberg:

‘Democratic presidential hopeful Elizabeth Warren said breaking up giant tech companies would “keep the marketplace competitive,” during an appearance at one of the biggest technology events in the U.S.

‘The Massachusetts senator spoke Saturday at the annual South by Southwest cultural festival in Austin, Texas, a day after proposing to take steps to break up companies like Facebook Inc. and Alphabet Co.’s Google if she’s elected.

‘On Friday she called for legislation that would designate large technology companies as “platform utilities,” and for the appointment of regulators who’d unwind technology mergers that undermine competition and harm innovation and small businesses. I think you can probably guess Warren is spouting empty words to win votes. Just another attempt to take power from the private sector and shift it to the government.’