The Bitcoin Booms Future Ahead

Cryptocurrencies took the world by storm in 2017.

But since early 2018, the price of most cryptocurrencies has been in a steep retreat. Including the crypto granddaddy — bitcoin.

This isn’t unusual. In fact, this is the third such cycle of extreme boom followed by extreme bust for bitcoin in its short 10-year history.

And this current crypto bear market is the longest in bitcoin’s history.

Critics will say this is because crypto is fundamentally worthless. And all that’s happening now is that they are heading to where they belong — zero.

But enthusiasts — like myself — think this is just yet another market cycle. And we’re actually setting up for the biggest bull market in history. A crypto boom so monumental it will take everyone’s breathe away.

I see bitcoin like a coiled spring right now. And the longer the price stays down, the harder it will bounce up when the time is right.

Which begs the question…when?

Let me start out by saying that no one knows what will happen next in any market, least of all the most volatile market in history!

All you can ever do is to try and read the clues being left for you.

With crypto, I think there are some pretty big clues for you right now for those that care to look. The big players are making big moves.

The funny thing about the 2017 crypto boom was that the traditional financial players completely missed out on it.

And believe me, that hurt them a lot!

Not just their pride, but their wallets too.

At one stage Binance — a two-year old crypto exchange with 200 employees — made more money than the 148-year-old Deutsche Bank with over 100,000 staff!

Initially blinded by arrogance and confused by the technology, ‘big money’ was very slow to jump aboard the crypto revolution.

But that has been changing fast over the past year…

Fidelity, Goldman Sachs and the New York Stock Exchange are just a few of the old school financiers in the process of getting cryptocurrency products up and running. They’re targeting the infrastructure areas, things like exchanges, custodian accounts and trading tools.

In the next boom, they want to be the ones clipping the ticket so to speak.

New Exchange Traded Funds (ETFs) are coming online every week in all countries around the world. The latest one was a Ripple (XRP) index fund brought to market by Swiss company, Amun AG.

The army of financial middlemen are seeking to package crypto in products mainstream investors understand. Though the absurd thing is this is exactly the industry crypto makes redundant!

It’s not just traditional finance that are coming either.

Facebook recently hired 60 extra engineers as they work on their own blockchain product.

Bloomberg reported back in December that Facebook are planning to launch a new ‘stable coin’. That is a currency pegged to a basket of traditional currencies that can be transferred using blockchain tech.

Facebook is another one desperately trying to play catch-up.

But to my mind, this type of product is just putting lipstick on a pig. Fiat currencies — backed by ballooning government debt — are the past, crypto is the future.

This is just another stepping stone on the way to financial sovereignty in my opinion. It’ll help bring the masses though.

There’s a lot more going on I could talk about.

But the main point is this…

Do you think all these companies are spending billions of dollars on something that is about to die? No, my friend, these companies see what is coming next. They know crypto is here to stay.

And they’re rushing out products for the mainstream to use in the next boom.

Because they know that next boom could come any time now.

The countdown is on…

That’s how long it is until the next ‘bitcoin halvening’ event. 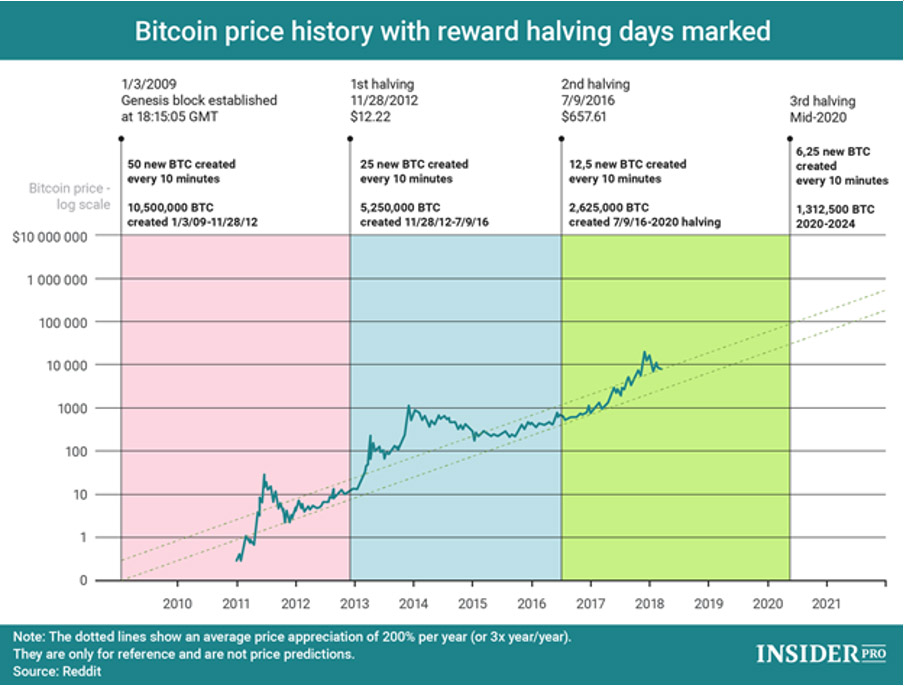 In case you don’t know, here’s a bit of background on bitcoin’s supply.

One of the fantastic things about bitcoin is its predictable supply schedule forgets big government and their endless printing, so the supply of bitcoin will forever be fixed at 21 million bitcoins (though each bitcoin is divisible down to eight decimal places so there plenty to go around).

There are around 17.5 million bitcoins currently circulating in the wild. That leaves only around 3.5 million to be issued. Ever.

New bitcoin is issued to ‘miners’ who help keep the bitcoin system secure. Every ‘block’ they verify results in a reward of new bitcoins.

Now over time, every two years or so, this block reward halves. Which means new bitcoins will still be getting issued up until around 2150, but in smaller and smaller amounts.

The point is this…

In just over a year, there will be less bitcoin up for grabs. Traditionally the price has soared on such moments as the ever-scarcer bitcoins get harder to come by.

And when you think that less than 0.1% of the world owns any bitcoin yet…well, I think you can work out the opportunity here.

Grab some while you can I say!