Graphene Could Be A Game Changer

I had never heard of ‘slip, slop, slap’ until a few years ago, when — while at the beach — a friend of mine burst into song.

To be honest, I had no clue what she was on about.

Until she explained it was a jingle from a cancer health campaign in the 80s. She had seen the singing seagull on TV ads plenty of times while growing up.

From what I read, the campaign has had great success. I’m not surprised, it is quite a fun (and creative) way to get kids to protect themselves from the sun…and for adults to remember.

It has even expanded to include two more words: Seek and Slide.

Seek shade and slide on sunglasses.

The campaign shows how much of a problem skin cancer is in Australia.

According to ARPANSA, Australian Radiation Protection and Nuclear Safety Agency, Australia is the skin cancer capital of the world. Two in three Australians will get a skin cancer diagnosed by the time they are 70.

The major cause is ultraviolet (UV) radiation from the sun.

The good thing is that we are coming up with tools to fight it. We have the slip, slop, slap campaign, and apps that tell you the UV degree for the day.

We could have another resource on the way soon too.

In the recent Mobile World Congress in Barcelona, we saw some cool stuff. We saw foldable phones, and smartwatches with screens that can wrap around your wrist.

But, there was also something interesting from the Institute of Photonic Sciences (ICFO). They showcased a device with graphene sensors that tracks vitals and things like your UV exposure.

‘Designed as a flexible, transparent and disposable patch, it connects to a mobile device and alerts the user once he or she has reached a defined threshold of sun exposure.

‘Using the same core technology as the UV patch, ICFO’s fitness band is being developed to measure heart rate, hydration, oxygen saturation, breathing rate and temperature, while monitoring the user when he or she is exercising, for example. However, the fitness band does more than simply measure physical activity.

‘Consider the following scenario. A person is trekking in the remote amazon jungle with limited access to water. By measuring the skin hydration of their body with ICFO’s fitness band, the user can optimize water intake, preventing any sort of dehydration.’

To give you an idea, the patch looks something like this: 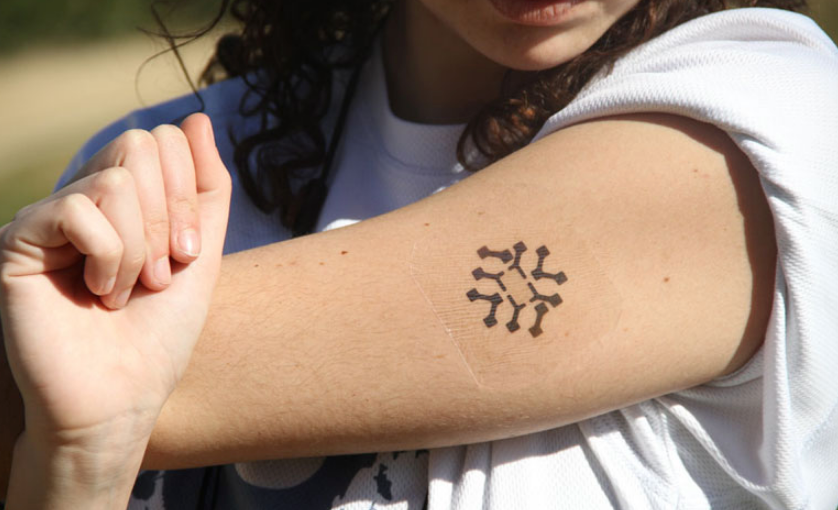 I can see how there could be some attraction to a wearable patch like this. [openx slug=inpost]

I recently got a Fitbit as a Christmas present.

While I am not that keen on using data collecting devices, I thought I would give it a go.

And, to my surprise, I have been using it quite a bit. The truth is that — while it doesn’t track UV light exposure — it has some great features to track the amount of exercise you get per day, your eating habits, etc.

But it is also quite bulky, especially if you are wearing a watch on your other wrist. And, it’s not very discreet.

A patch could be an interesting solution to those issues.

But, the wearable is not all ICFO is using graphene for. As the article continued:

‘In addition to these prototypes being exhibited at MWC 2019, ICFO will also showcase two other light-based graphene technologies. These include the world’s smallest single pixel spectrometer and a graphene-enabled hyperspectral image sensor, both with broadband capabilities, beyond to what was once perceived possible without the use of costly and bulky photodetection systems.

‘By enabling spectroscopy in such small dimensions, consumers could now be equipped with tools that previously were only available to highly specialised laboratories. From the detection of counterfeit drugs to the identification of harmful substances within a product that we use or food that we eat, compact, low-cost spectrometers could become an indispensable accessory of our everyday life.

‘”This technology would allow users in the supermarket to hold the camera to fruit and infer which is the freshest piece. Or, in a more extreme example, the camera could be used for driving in dangerously dense fog by providing augmented outlines of surrounding vehicles on the windscreen.”’

Graphene has some great qualities

As we wrote before, graphene has some great qualities.

It is very light and thin. But it’s also super strong while flexible and elastic.

It is a great conductor of heat and electricity.

And it is made of carbon, which is very common. This all makes it great for using it for electronics.

While graphene has been around for 15 years, it is only now that we are starting to see some applications.

And, according to a new report by Grand View Research, the global graphene market size could reach US$552.3 million by 2025, and see a compound annual growth rate of 38%, mainly from growing demand in smart consumer electronics.

Graphene could be a game changer for the smart consumer electronic industry.