You Can Expect Everything to Change

After all, as the saying goes, ‘Change is the only constant in life’.

Yet, you would be surprised how many people invest based on recent past performance, projecting the present into the future.

Economists even have a name for it: extrapolation bias.

But things DO change, and usually when people least expect it.

After all, how many people in the roaring 20s expected the 1929 stock market crash…or predicted the great depression? In fact, back then investors, expecting the good times to keep rolling, kept on jumping into the stock market pushing stock prices sky high…until it all came crashing down.

Or how many could have anticipated the devastation of the Second World War? If you told anyone in 1938 that in a few years Germany would invade France, that London would be under siege and that the US would drop a weapon of mass destruction over Japan, how many would have believed you?

Or even more recent events.

In 2006, how many would have predicted that Lehman Brothers, a bank that had been around since 1850, would collapse?

That soaring property prices would come crashing down and that many would lose their homes. Or that Americans would become so angry at the system that they would elect Donald Trump — back then a reality tv star in The Apprentice — to the US presidency?

As the movie the Big Short showed, Michael Burry had a really hard time convincing his own investors that the housing market was about to collapse.

The future is uncertain for the stock market

And things can change, very quickly.

The current US bull market has just turned nine years old last March and it is one of the longest bull markets since WWII. The 2008 crisis is a distant memory. In fact, some are even calling the recent turbulence in the markets a buying opportunity.

In a way, things have stayed pretty much stayed the same since 2007.

That is, we have kept on accumulating debt.

According to the Federal Reserve Bank of New York, total household debt has reached an all-time high of US$13.21 trillion. That is, it is US$526 billion higher than in the previous peak in the third quarter of 2008, when it was at US$12.68 trillion. 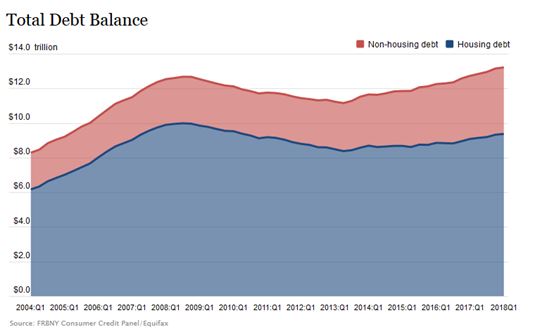 And, it’s not just households.

And, as you can see in the graph below, US debt has almost tripled in the last 20 years. The latest trillion added in just the last six months.

We are living off of debt

The growth and recovery we have seen in recent years has come, in large part, from fiscal and monetary stimulus, and not actual growth. Negative interest rates…quantitative easing…tax cuts…

And, to keep going, our system needs to feed on more debt…The Congressional Budget Office expects debt to increase to US$28.7 trillion in the next ten years.

There are a couple of problems with this.

First, the definition of debt is getting money today to be repaid in the future, with interest.

That is, we are receiving payment today for work that will be done tomorrow. At this rate, how much of our future will we mortgage to keep on going today?

Remember, interest rates are increasing in the US. The US Federal Reserve Bank is hoping to reverse eight years of monetary stimulus by raising interest rates and reducing their bond holdings. Which will mean that interest payments are also about to get higher.

And, we’re as financialised as we were back in 2007, as you can see in the graph below. That is, we could once again run into problems as investors take on more risk. 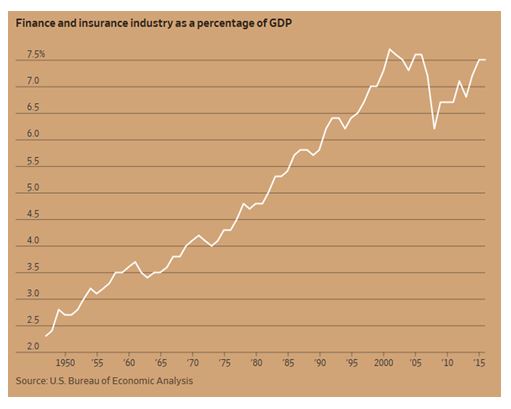 As you can see, things haven’t changed much since 2008. Many of the factors that led us to the crisis back then are still here. In fact, you could even argue things have gotten worse. That’s why you should be expecting change.

The US is the largest economy in the world. Any trouble there will have repercussions around the world. Will the next crisis come from the US? Who knows.

As I said before, crises happen when you least expect them, and can come from anywhere. But, all this certainly makes us more vulnerable.

What’s the best way to prepare for a crisis? Pay off debt…

…hold some cash and precious metals…