We keep hearing there is a reasonable chance of bitcoin’s value going to zero.

Here is what an asset manager from Vanguard said recently:

‘I’m enthusiastic about the blockchain technology that makes bitcoin possible. In fact, Vanguard is using such technology. As for bitcoin the currency? I see a decent probability that its price goes to zero.’

Or, even more recently, economist and Yale professor Robert Schiller said to CNBC that bitcoin could be extinct in 100 years. As he said: ‘Bitcoin won’t look anything like it is today. It will have a different name, if it exists.’

Yep, bitcoin could very well not exist in 100 years…but, so what?

Throughout history many currencies have gone bust. Some even in a relatively short period.

In fact, I have seen a few of them vanish in my lifetime.

Back in the late 90s, the Argentinean austral for example, only survived six years.

When the government first issued the austral, they issued notes for the values of one, five, 10 and 50.

But then, hyperinflation hit.

If you have ever lived through hyperinflation, you know it’s chaos. You could buy a bottle of water in the morning, and by the afternoon the price has changed.

Workers would receive their salaries at the beginning of the month and rush to the bank to exchange it for US dollars. That way they could hold its value until the end of the month to buy groceries, etc.

Soon, the austral started adding zeros. It got so bad that the government created emergency provisional notes in the value of 500,000.

You were literally carrying millions in your wallet for everyday purchases, until they replaced it with the peso.

Another one was the Brazilian cruzeiro, which lasted only a few years.

High inflation meant that it was then replaced by the cruzeiro real. This currency lasted a few months, until the current Brazilian real came into play.

In fact, a few years ago, a woman in Brazil found a suitcase full of money.

The suitcase was her grandfather’s and had savings he had accumulated over the years. Imagine her disappointment when she saw that it contained cruzeiros and other Brazilian currencies that weren’t in circulation anymore! Their value was pretty much zero.

But, currencies disappearing is not limited to third world countries.

France…Germany…Greece…they have also had currencies disappear.

The fact is that in the long term, money tends to either vanish or lose its purchasing power because of money printing and inflation.

The US dollar has lost most of its value since 1913, as you can see in the graph below.

Bitcoin, though, is deflationary. What I mean is that, contrary to fiat money, the value of bitcoin should — in theory — rise over time.

Because there will only be a limited number of bitcoins in circulation. 21 million to be exact…well, even less because of people losing their passkeys.

Bitcoin is a decentralised currency, which means that no one centralised entity controls it.

The thing is, the fact that it is decentralized is why many are arguing that it could disappear. That is, there is no central authority issuing it and forcing you to use it or pay taxes. The argument is that bitcoin could disappear because people don’t use it, but instead are buying it to store it.

But, in my opinion, that’s what makes it more attractive.

Bitcoin was created by Satoshi Nakamoto (a pseudonym, nobody knows who the real creator is) as a response to the 2007 crisis.

How do we know? Well, because there was a bit of text written on the genesis block, which is the first block — block 0 — of the chain. It said: ‘The Times, 03/Jan/09, Chancellor on brink of second bailout for banks.’

This was the headline of The Times on the day the genesis block was created. It is most likely there as a time stamp…and to remark on the instability created by central banks.

Bitcoin is a currency so far untouched by central bankers…and it can be accessed and transported to anywhere in the world.

And, when there is turbulence in the markets, some are starting to flock to it.

I mean, we saw this back in 2013. We are currently seeing it with Venezuela. And, we saw it once again this week, as Italy headed into trouble.

While the US markets plummeted, bitcoin gained about 5%. You can see the spike in bitcoin trading as news hit from Italy below. 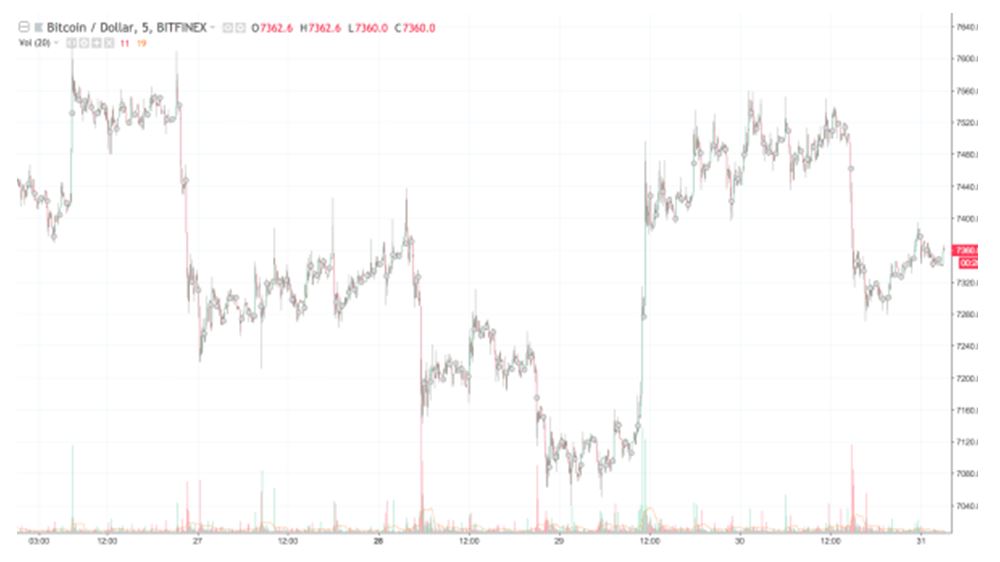 And, we could see even more spikes like this as countries start struggling with increasing debt…