Story telling opened up the imaginations of children.

Often times, the fable carried a lesson in life.

The Emperor’s New Clothes…don’t let pride or self-interest stop you from speaking up when you know the truth.

The Wizard of Oz teaches us the grass is not necessarily greener on the other side and that character is found within.

Many fairy tales were adaptations of real life events.

For example, Snow White was based on the life of Margarete von Waldeck…a 16th century Bavarian noblewoman. The dwarfs were actually severely deformed children who worked in a local copper mine.

In 2014, I adapted the story There Was an Old Lady Who Swallowed a Fly, to describe the absurdity of the Fed’s actions in handling crises of their making.

Here’s an edited extract with an updated ending…

There Was an Old Lady Who Swallowed a Fly

There Was an Old Lady Who Swallowed a Fly is a children’s song about a lady who swallowed animals of ever increasing size in order to catch the previously swallowed smaller animal.

The sequence and rhyme of the old lady’s animal degustation is (feel free to sing along):

The moral of the story is — trying to solve a problem with an even bigger problem inevitably leads to a very sad ending — of course.

We can apply this moral to the actions of the US Federal Reserve since the late 1980’s.

The Fed’s mandate is twofold:

During the 1970’s inflation moved well outside the Fed’s comfort zone — soaring to 13 percent.

In 1980, the then Fed Chairman, Paul Volker, moved decisively to tame the inflation beast by ratcheting interest rates higher and higher — in spite of enormous political pressure to turn the interest rate dial down. The impact of this bold and deeply unpopular strategy was to plunge the US into a deep recession. Volker’s courage was eventually rewarded — inflation fell back into the single figure range. Volker’s determination to stay the course did him no favours with the ruling class — he effectively signed his own ‘professional death warrant’.

The following chart shows Volker’s interest rate handy work in the early 1980’s — taking the US cash rate to nearly 20%.

To put the boldness of Volker’s action into perspective, imagine, if it were necessary to do so, Dr. Lowe (RBA chief) doing that in Australia today?

The political and public heat he’d incur would rival Hades. 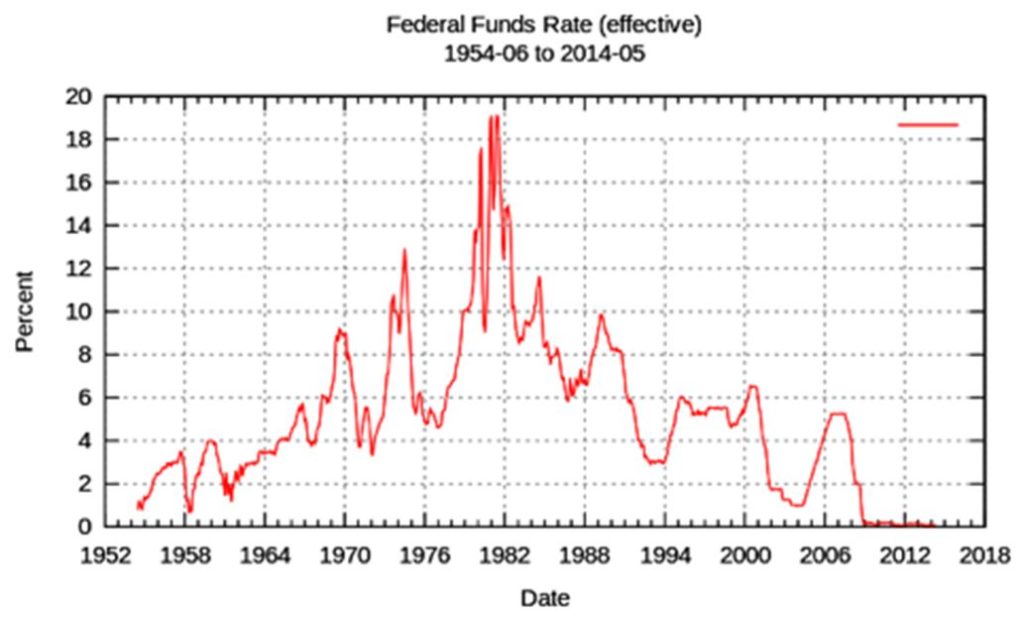 Greenspan was no Volker. Greenspan craved the populist power Wall Street and politicians bestowed upon him. Volker was a disciplinarian, whereas Greenspan gave the spoilt market, and jelly backed politicians, whatever they wanted.

In 1990 the US economy ‘swallowed a recessionary fly’. Greenspan obviously thought ‘perhaps she’ll (the economy) die’. He need not have worried. Compared to the recession of 1982/83, the 1990 recession was rather tame. But Greenspan, not wanting to disappoint his political masters, sent down a 3% interest rate spider to catch the fly.

The spider’s wiggling and tickling worked. The US economy recovered. Inflation rose.

Greenspan thought he’d found the formula to correct the ills within the economy — turn the interest rate dial up or down and say the right things, with sufficient monotone gravitas, to keep the debt funded party going.

Greenspan’s response to the global economic wobbles caused by the 1998 Asian crisis was to send down an ‘interest rate bird’ to catch the spider. How absurd.

Again, the economy recovered and powered ahead with the dotcom boom.

At the height of the boom, Greenspan was being hailed as a hero — he could do no wrong.

Every boring word he spoke was analysed in great deal — at one stage even his choice of ties was subjected to lengthy discussions on whether a subtle message was being sent to the markets. This was truly absurd.

The dotcom bust gave Greenspan a ‘cat size’ problem — imagine that, a problem of his very own making. What did Greenspan do?

He went off to the animal shelter and found himself an interest rate ‘dog’.

Interest rates were quickly dialed down below two percent and kept there for over two years.

Phew, the dog ate the cat — Greenspan once again was the saviour.

The US housing market, fuelled by a toxic mix of low interest rates and liar’s loans, went soaring skywards. The share market shook itself off from the dotcom bust and responded positively to the housing inspired economic recovery.

In February 2006 Greenspan handed Ben Bernanke the keys to the Fed’s menagerie.

‘During Greenspan’s chairmanship, when a crisis arose and the stock market fell more than about 20%, the Fed would lower the Fed Funds rate, often resulting in a negative real yield. In essence, the Fed added monetary liquidity and encouraged risk taking in the financial markets to avert further deterioration.’

Bernanke was definitely not a Volker. Bernanke’s impeccable academic record (all theory and no practice) made him the perfect key holder of the Fed’s animal farm.

The subprime crisis — that began in early 2007 — does not qualify as the ‘goat problem’.

However, Bernanke did make a goat of himself when he effectively said ‘move on, nothing to see here — everything is contained’.

Bernanke sent in the interest rate and QE ‘snake’. Rates slithered down to 0.25% and remained there for more than 7 years.

But something different was happening this time — the economy was not responding.

The interest rate and QE ‘snake’ was struggling to solve the problem of a sluggish economy.

Even the most sustained period of the lowest interest rates in the history of money wasn’t enough to resume the debt funded consumption model Greenspan spawned.

Over the past decade the ‘snake’ has worked a treat on asset prices. The US share market went on to record highs.

However, contrary to the Fed’s spin, the broad economy is not feeling the love on Wall Street.

The real US unemployment rate (compared to the doctored official rates which are measured against falling workforce participation numbers) remains stubbornly high.

Wages have stagnated. US GDP remains well below trend.

It’s evident the top 10% have benefitted greatly from the ‘snake’ solution, but the remaining 90% are sluggish from a massive case of debt indigestion.

Janet Yellen was also no Volker. Her academic pedigree was equally as impressive as Bernanke — another perfect key holder of the dwindling animal farm.

Since 1990, the Fed has addressed every crisis with an escalated level of response.

The Fed’s ‘solutions’ have only managed to blow an even larger asset bubble than the one that preceded it.

The Fed has really outdone itself this time, as the current one has been dubbed ‘the everything bubble’.

The ‘cow’ has been fattened in a paddock, fertilised with printed money, suppressed interest rates and central banker BS.

What sort of ‘horse’ is going to be force down the economy’s throat is as yet unknown – even to the stud masters at the Fed.

The conjecture on how many hands high the ‘horse’ will need to be is somewhat irrelevant, because we know the ending — of course. Perhaps the market will die.

Sadly, Greenspan set the tone for his successors — do whatever it takes to keep the markets afloat.

This approach has convinced investors that any crisis or market downturn will be remedied by the Fed providing ample liquidity and a lower interest rate setting.

The problem is the Fed’s actions over the past twenty—five years have created a mindset of excessive risk taking — professionally termed ‘Moral Hazard’.

What investors do not seem to appreciate is the Fed is fast running out of bigger problem solutions.

The ‘horse’ sized solution to the deflationary bust that’s coming is likely to be a massive stimulus effort…aimed at putting dollars/euros/yen/renminbi directly into consumer pockets.

The potential ‘fly in the ointment’ is the consumer may not respond like the Pavlovian dog expected by policymakers. The consumer might revert to being a saver…using the stimulus to rebuild their depleted capital base.

This economic fairy tale does not have a happy ending.

There is no Prince Charming. A magical pumpkin carriage does not await us.

The central bank Pied Pipers are taking us over a cliff.

The moral of the story is to take action well before the crowd realises (too late) that the Emperor is butt naked.