Bitcoin Surges Past US$20,000: Why Are We Seeing a New Record High?

2020 has sure been an interesting year all round.

Many questions have been asked:

Some people believe that bitcoin could be the answer to these problems.

Without a doubt, you would have heard stories in the media about bitcoin’s progress this year:

The factors encouraging the rise of bitcoin

I believe there have been a variety of factors that were going on throughout the year to cause this:

Let’s explore these individual reasons, one by one, in more detail…

If you look at the two charts above, you will see that that bitcoin’s block-reward halving happened previously in 2012 and 2016.

Within two years after those events, the value of bitcoin increased by 7,976% and 2,902% respectively.

This scenario may encourage a further price increase for bitcoin.

As we say, past performance is not an indicator of future performance. However, it is fascinating to see what happens when there is less supply available for bitcoin.

Bitcoin has become more mainstream in 2020

Many businesses are continuing to adopt cryptocurrency every single day. Now we seem to see cryptos being offered everywhere as a payment option — on websites and retail stores.

One big shift happened on November 13. PayPal officially launched the ability for US users to buy and sell cryptocurrency, with a US$20,000 a week limit. 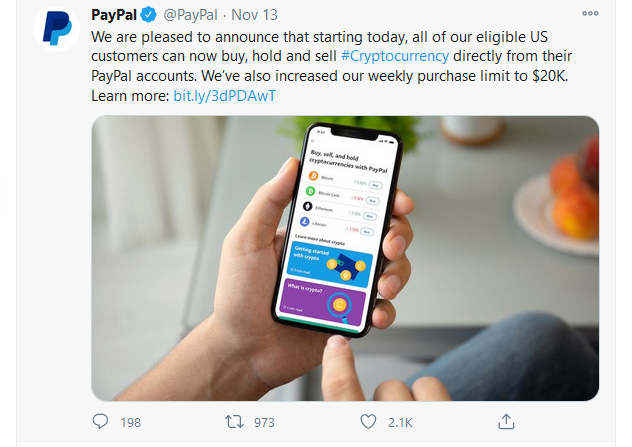 Not all active USA PayPal users will be buying, selling, and trading goods with cryptocurrency regularly. But even if small percentage of Americans use crypto —such as 1% — that still represents a huge proportion of people using crypto in their daily lives.

This will, without a doubt, have an influence on the value of cryptocurrency.

But PayPal implementing this is only the beginning. You never know. Soon enough, PayPal may be introducing it for account holders residing in Europe, then maybe the rest of the world.

Why bitcoin is considered a safe haven from hyperinflation

As many of you will be well aware of, the government has been borrowing money excessively for Covid stimulus.

Will this lead to inflation?

The risk is certainly there.

When there is an increase in the money supply, money becomes less valuable. Therefore, the price of goods and services becomes more expensive.

On average, inflation increases every year by roughly 2%.

The fact that government spending has increased by about 30% could be an early warning sign of hyperinflation in the foreseeable future.

Hyperinflation is when the price of goods and services increase rapidly to keep up with the pace of an increased money supply.

Often, during times of hyperinflation, many people buy stockpiles of goods. They fear that prices will grow much more expensive. So they want to save having to pay for them later.

This may lead to shortages of products. This could mean your daily essentials like food and household items.

So, how is bitcoin protected from all this?

For starters, bitcoin is not regulated. It hasn’t got any central authority. There is no government control.

Also, as I have mentioned above, bitcoin’s block rewards halve once every four years. This is so that bitcoin can keep up with the rate of inflation. The bitcoin supply is set to decrease, not increase. Therefore it won’t lose its value, and it will still be a very valuable asset.

Bitcoin has already surpassed US$20,000 per coin. Some commentators have suggested that this cryptocurrency could climb even more, potentially hitting a value of $50,000.

Is this possible? Or is it just pure speculation?

For now, it’s still a case of wait and see.

I think there is a bit of a herd mentality when it comes to people protecting their wealth during times of economic turbulence. Despite the risk and volatility of bitcoin, some people appear to be willing to treat it as digital gold; a digital safe haven.

Where we go from here is anyone’s guess.

PS: As part of our Vistafolio Wealth Management Service, we can invest in a cryptocurrency trust on request. This allocation strategy is part of a balanced portfolio which we professionally manage for Eligible and Wholesale clients. Click here to find out more.