The war goes on.

Three policemen went up to our high pasture, Compuel, on Friday. We went out to look for our injured bull.

You’ll recall, we’re in a fight with the originarios. They claim ownership of our ranch based on ‘indigenous rights.’

It is as if someone said he was a descendant of the Manhattan Tribe and claimed that New York City belonged to him. Then, to make his point, he burned down Rockefeller Center and stole all the books from the New York Public Library.

Here, the scale is almost comically modest. But the principle is the same.

And last Friday, the police were on the case. They drove up…but in the half-light of dawn, they ran into one of our bulls on the open range before getting to the house. Their truck was wrecked. 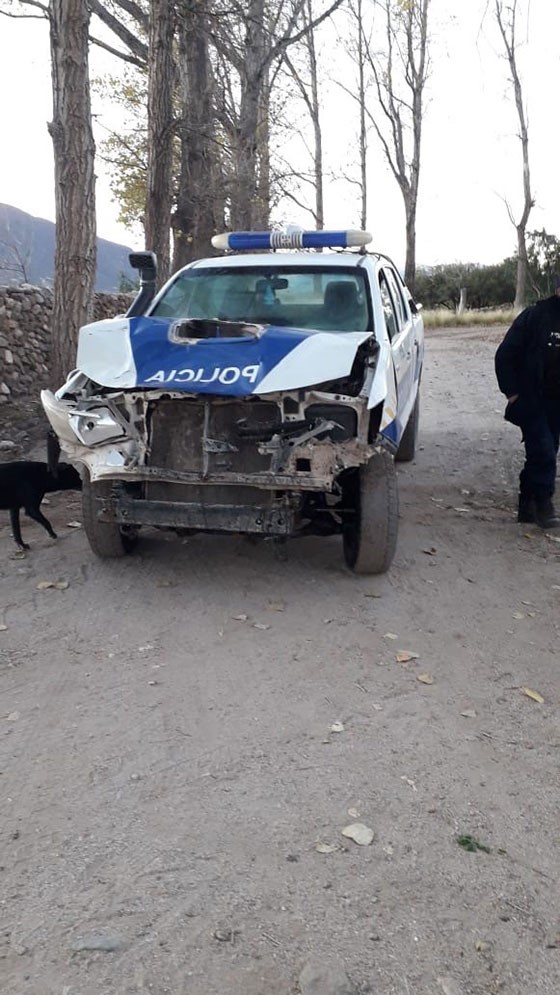 The police truck after its collision with one of our bulls

Then, after consultation with their superiors, they rode out to inspect our burned-out cabins and wrecked corral. They took pictures. They filed a report. And they suffered.

We’re used to the saddle. We go out on a horse for an hour or two every day, inspecting the cattle…checking the irrigation canals…or just taking in the scenery in the evening.

Even for us, a ride to Compuel and back, which could easily stretch to 12 hours, much of it over rocky paths — freezing in the morning…hot at midday — is exhausting. For the three policemen, it must have been agony. One had never been on a horse. The other two looked very uneasy in the saddle.

But they did their jobs…They left here at about 7 in the morning. By nightfall, we were getting nervous. They were riding over treacherous mountain paths. The horses could see, but their riders could not.

In the meantime, they had gotten to the valley, surveyed the damage, and interviewed the culprits. All of them denied any wrongdoing, of course. And we weren’t able to find our missing sepo (the essential part of the cattle chute.)

‘They were worn out when they got back…casi muerto,’ said the man in the blue uniform out in front of us. The police chief came to see us; he and three others wanted their pickup back, and they needed our help to get it. We have a big truck, which we use for hauling hay and cattle. So, we made some ramps and drove the police car up onto the truck.

The general rule here is that if a cow gets out of its pasture, and a car runs into it, the fault lies with the cow’s owner for not keeping his fences up.

Here, we have no fences. So, we’re not sure who’s going to pay for the damage. But we were happy to be able to get the pickup down to civilization, where it can be repaired.

‘Why can’t they just arrest those people?’ we asked our lawyer.

‘Of course…everyone would like to arrest them — the judge…the police…The police are sick of going up there every time we make a complaint.

Three families live up at Compuel. The Diaz, the Liquin, and the Chailes. They are big families, with relatives all up and down the family. Some claim to be originarios. Some don’t.

There are also a number of families that keep cattle up on the mountains surrounding Compuel. They are called pastajeros. They use our land, our corral, and our houses. In return, we get a few of their cows every year. The cattle are wild. And almost worthless. (Tough, scrawny, ‘mountain cattle,’ with lots of bones, but little meat.)

The mountain cattle are rounded up once a year, vaccinated, tagged, and castrated. A few are sold ‘in black’ (informally) to friends and relatives. A few others are butchered.

The roundup is a bit like Thanksgiving in America. Families get back together. Aunts, uncles, and cousins who have moved to the city come back to help, though they have often been ‘citified’ and no longer have the stamina for the high-altitude work. But everyone has a good time — eating, drinking, and catching up on the news.

Natalio (our oldest and most-trusted employee) rounded up his cattle last weekend. Normally, he would do it at the Compuel corral. But without the sepo in service, he was forced to bring them down to the main corral near our house.

Sunday morning, we saw the dust cloud…telling us that Natalio and his herd had arrived. We went down to help…and Elizabeth came to take pictures. We were greeted respectfully and cheerfully by the whole family. Then, the work began.

There are three stages to a roundup.

First, the cattle must be found and driven to the corral. Out on the open range, it is not too hard. You can see them from miles away. And you are on horseback.

But up in the mountains, the roundup is on foot, looking for animals in the mountain folds, along tiny rivers, amid huge rocks, and spread out over many square miles of wilderness.

‘It’s very tiring,’ said Natalio, who has done it once a year for his entire life.

The cows are then assembled in the valley and driven to the corral.

In the second phase, the young boys go to work. Natalio has had two families. His first companion already had three children when they got together. They had four children together. Then, Natalio took up with one of the girls from her previous ‘marriage.’

With this new companion, Natalio had another four children. Now 63, he has two young sons, Diego and Ramon, about 10 and 8 years old, as well as Guillermo and Rodrigo, both in their 20s. 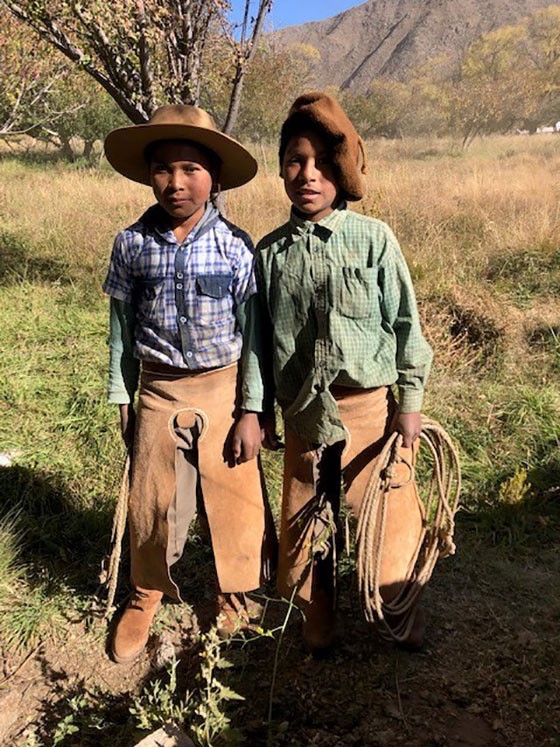 Diego and Ramon ready for work

The youngest ones lead off. In America, boys this age put on helmets, elbow pads, and training wheels to learn to ride bicycles. Here, armed only with their lassos and chaps, they jump in amongst the horned animals, run after the calves, throw their lassos, and drag them into a separate pen. 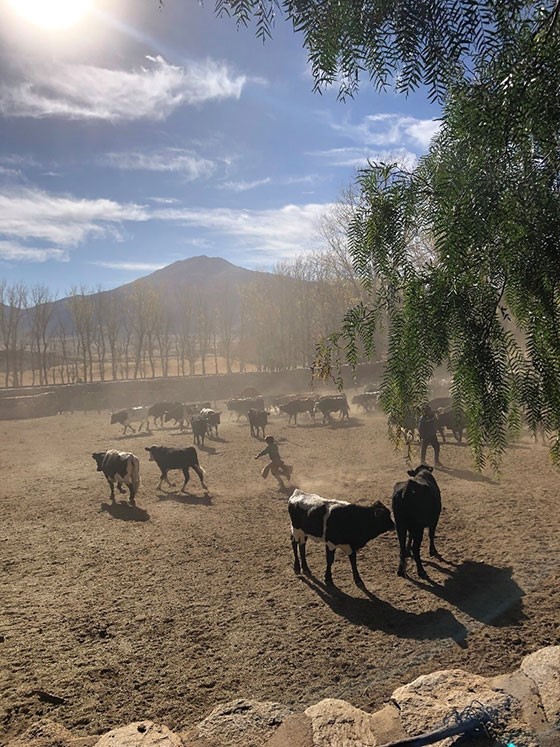 Diego rounding up the calves with his lasso

After the calves have been separated, the remaining cows are herded into a holding pen.

In the third phase, the cows are pushed into the narrow chute…in groups of seven or eight, packed so tightly that they can’t move. There, the certified vacunador, Jose (Natalio’s nephew), administers the shots with a large needle, while the older boys and Natalio decide which animals will be kept, which will be castrated, and which will be sold or slaughtered.

Our job is just to operate the gates…and observe, trying to understand the delicate judgments that mean life or death to the animals in the chute.

We were thus engaged, when suddenly, everyone went silent. One of the cows in the chute had reared up and knocked the hypodermic needle out of Jose’s hands.

The cows were tightly jammed in the chute. If one of them stepped on the needle, the roundup would be a lost cause. No needle, no vaccinations. No vaccinations…and the whole thing would have to be called off.

We followed Natalio’s lead…leaning over the wall to hold the cows away from the needle, as Jose tried to pick up the needle with a long stick. 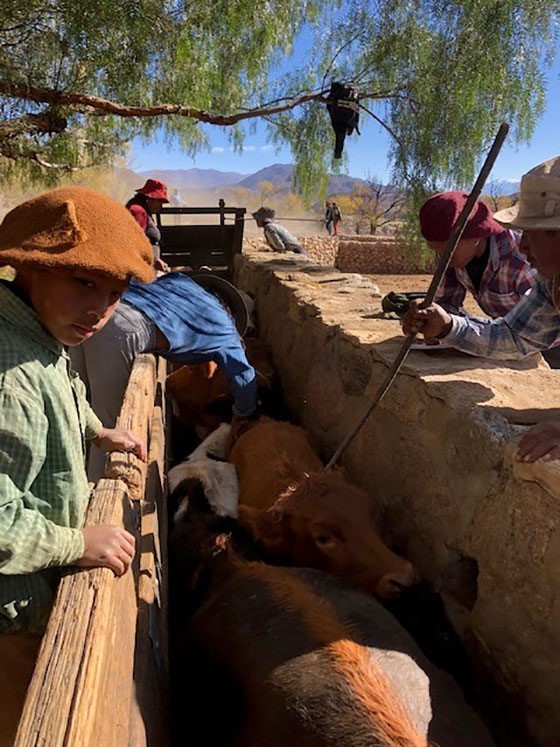 The cows shuffled in place as Diego put his slim arm through the boards of the chute and tried to reach down to where the needle was lying on the ground. But his arm was too short. 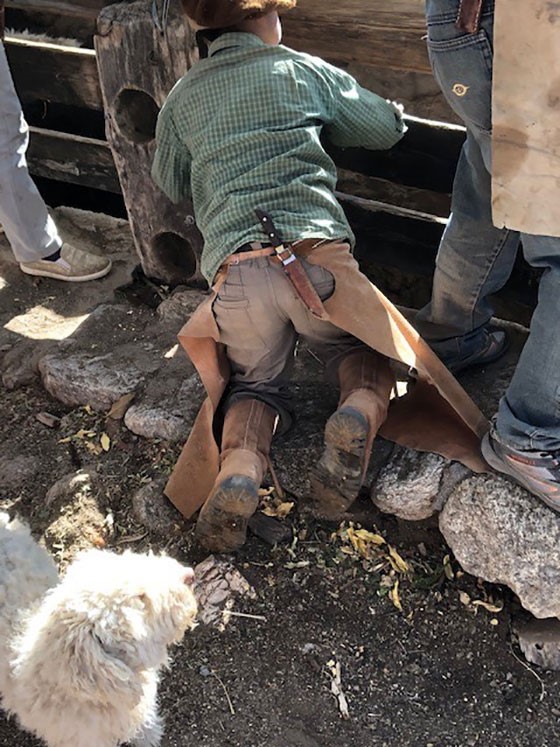 And when the stick operation failed…there was only one solution. Someone had to jump down into the chute.

This was a dangerous thing to do. These were not calm, well-behaved, farm-raised animals. These cows saw humans only from a distance…and rarely got close to them. They were almost wild animals. And jumping down into the chute put you between the hindquarters of one animal and the horns of another, with nowhere to run.

But little Diego didn’t hesitate. With a nod from his father, he climbed the fence and jumped down, quickly grabbed the needle, and skedaddled back up the fence and out of the chute as fast as possible.

The team went back to work.

Meanwhile, the Originario War goes on. Next week, it’s our move. We are not planning a head-on Napoleonic charge; that would be a loser here, just as it was at Gettysburg. Instead, we’ll try a flanking maneuver.

‘Let’s make it clear that we’re not surrendering Compuel,’ we outlined a plan of attack to our foreman.

‘We’ll go up there again, with cement and beams and a new water line (about a mile and a half long)…I know, it will be expensive…

‘And we’ll buy some of the mountain cattle and put our brand on them, making it clear we’re here to stay. We’ll also fix the road and get an all-terrain motorbike to make it easier to keep an eye on the place.

‘And we need to fix the cabin so we have someplace to stay…and the corral, too.’

‘But won’t they just destroy it again?’ came the level-headed question.

‘How are we going to do that?’

Editor : Bill Bonner - May 21, 2020
No Thoughts on Planning Our Next Move in the Originario War