Yesterday, we began replying to readers’ complaints. We’re doing so in a calm, adult manner…our small contribution to civic enlightenment and national harmony.

Here’s Charles H. with a common gripe: He’s troubled that we don’t stick around the USA and help fix the problems…

Instead of complaining about what’s wrong with Washington and the current administration, why don’t you run for office and make positive changes to make the world a better place? Instead, you’re holed up in your retreat and continuing the bashing of administration policies in America.

It’s easy to stand on the sidelines as a critic. What is President Bill Bonner’s FIX for this multi-complex problem that we’re in?

We appreciate the confidence Charles shows in our ability to solve problems. But long-term Diary sufferers know it is misplaced…

We have enough trouble trying to figure out how to run a cattle ranch…or how to help our children…or even, how to understand Federal Reserve policy in the age of the coronavirus.

Isn’t it asking a lot from a free publication — not only to correctly identify national problems…but to solve them, too?

Besides, we don’t think it works that way.

The world is made a better place simply by each doing our own work as well as possible…providing others with real goods and services, and by looking out for those around us as best we can.

As Johann Wolfgang von Goethe put it, ‘Let everyone sweep in front of his own door, and the whole world will be clean.’ We keep busy with our own broom.

By contrast, do the office seekers and grandstanders — Donald Trump, Nancy Pelosi, Joe Biden et al. — make the world a better place? They create no wealth, so every ‘benefit’ they give to some must come at the expense of others.

As for their insights and analyses, they are far too busy raising campaign funds (from lobbyists and cronies)…and mugging for the cameras…to have any worth repeating.

And their policies? People who insist that you follow their ideas are always those whose ideas are idiotic. Typically, they are big…and dumb, appealing to the masses’ desire for glory, larceny, and security.

But let’s look at the companion critique, that there is something vaguely unpatriotic, frivolous, or treasonous about living overseas…

A life of luxury in an elegant hacienda in Argentina is easier than a life in a high rise in Manhattan. That is, until the mestizo banditos come storming the glass castle, at which time the stone-thrower will come running back to seek shelter and aid from the very system that made his glass castle possible.

It is easy to be an ‘armchair general’ or a ‘Monday morning quarterback’ while enjoying a life of luxury. None of us should ever forget Theodore Roosevelt’s seminal speech, ‘The Man in the Arena.’

He’s certainly wrong about the luxury point…and the danger.

Our water comes from a spring. It’s heated by the sun. And, often, we have to walk a mile…and cross a footbridge…to get to the outside world.

Is that more luxurious than a Manhattan condo?

Our only luxury here is Inez. She comes over every day and helps with the housework. With just the two of us here (your editor and Elizabeth), there’s not really much to do, but it’s nice to have her around.

And at today’s statutory rate — 22,000 pesos per month, or about $195 U.S. on the black market — full time household help costs us less than parking in Baltimore.

We’re grateful for the help and Inez is happy to have some income. 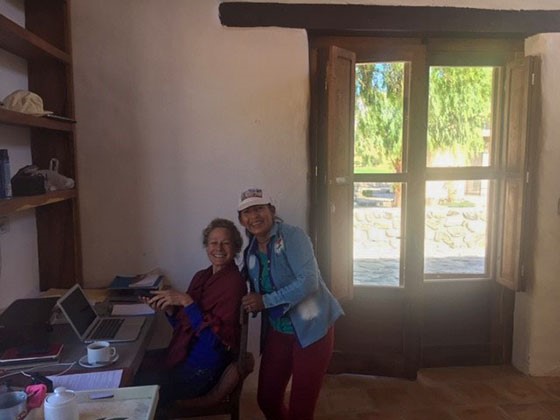 Inez on the right

As for the mestizo banditos, we appreciate Richard’s concern for our safety. But we lived most of our lives in the center of Baltimore.

However dangerous Richard imagines the local desperadoes…he might want to take a walk around Baltimore for comparison.

The man in the arena

Finally, we picked up Roosevelt’s speech. The essential part we reprint here:

It is not the critic who counts; not the man who points out how the strong man stumbles, or where the doer of deeds could have done them better.

The credit belongs to the man who is actually in the arena, whose face is marred by dust and sweat and blood; who strives valiantly; who errs, who comes short again and again, because there is no effort without error and shortcoming; but who does actually strive to do the deeds; who knows great enthusiasms, the great devotions; who spends himself in a worthy cause; who at the best knows in the end the triumph of high achievement, and who at the worst, if he fails, at least fails while daring greatly, so that his place shall never be with those cold and timid souls who neither know victory nor defeat.

Roosevelt is one of the saddest figures in White House history. Born rich, he never had an honest job in his entire life. And he never added a penny to the world’s wealth.

In his speech — given at the Sorbonne in Paris — he lauds the risk taker…the doer…the striver…and achiever. Yet his own big achievements were amateurish…lethal…and most came at someone else’s expense.

In his hand-tailored uniforms, with his own private army of dreamers, schemers, and vainglorious world improvers, he was the picture of the warmongering martinet.

It was he who was largely responsible for getting the U.S. into two completely pointless wars — the Spanish American War and WWI — at a cost of 120,000 dead Americans…and millions of dead Spaniards, Cubans, Filipinos, Germans, and French.

Among the victims, as if the gods were teaching him a lesson, was Kermit, his own son.

Of course, the old Blunderbuss didn’t like critics. They didn’t just point out his conceit, how ‘the strong man stumbles,’ as he puts it. They told him what a clownish jackass he was.

And by the way, Jefferson, Adams, Franklin, and Eisenhower all lived overseas; we doubt it harmed them, or the nation.

Tim B. takes a shot from a different angle. He’s worried about our health:

Hope you don’t need a doctor. Oops, did you think about that? Or, maybe you don’t care. Anyway, why are we listening to someone who doesn’t have a good plan for anyone’s future…or even your own?

Tim should get out more. There are doctors here, too. Except for those at the very top end, they take the same courses as U.S. sawbones and they have the same tools. They just don’t charge as much.

When we thought we were having a heart attack a few years ago, we found their care very sensible.

Fearing that the altitude up at the ranch had put a strain on our heart, the local MD gave this advice: ‘Well, don’t go up there.’

Later, we went to Johns Hopkins’ cardiac unit in Baltimore. Their advice was to take beta-blockers and other patent medicines with uncertain upside and a long list of side effects.

We decided to go with the Argentine’s advice. That’s why we spend most of our time down in the valley, rather than up at the ranch. We’ll let you know how it works out.

But probably the most frequent, and most emphatic, criticism we’ve gotten over the last three years concerns our views on Donald J. Trump.

Tune in soon…to find out the real story…