Yesterday, a gray pickup truck appeared at the kitchen door.

‘I drove across the river. It didn’t look so bad, so I just decided to try.’

‘It makes me feel a little sad,’ said Elizabeth. ‘It was so nice being isolated…with only the footbridge.’ 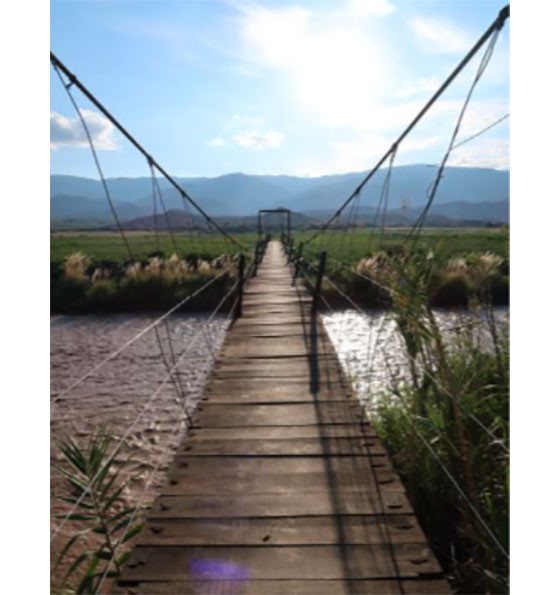 Crossing the footbridge brought us to our own little refuge…where we could shelter at home without having to worry about the coronavirus, neighbors, or the outside world.

It was idyllic. Like happy island castaways, we’re sorry to see the rescue ship.

The coronavirus is forcing confinement

Meanwhile, back in Baltimore…

‘The streets are empty,’ our daughter tells us. ‘Even the bums seem to have disappeared.

‘A police car with a loudspeaker went through the neighborhood telling people that there was a $5,000 fine being outside without permission. But the coffee shop was open.’

Down in Buenos Aires, a friend reports, people are confined to their apartments.

Each evening they gather on their balconies to salute health care workers — in the front lines in the fight against the coronavirus — by clapping for a few minutes.

‘But last night…I noticed a second display. This time they went out on their balconies and beat pots and pans…just like they did in the crisis of the early 2000s.

‘They were calling for all members of Congress to cut their pay in half…and they’re protesting their confinement.

‘Apparently, the murder rate has gone way up…from people being trapped with one another. This quarantine is supposed to save lives. I’m not sure it really does…’

Going broke because of the coronavirus

And, with so many people locked in their homes, the economy is seizing up.

One person loses his income. He stops paying his rent. His landlord doesn’t get the income so he puts off remodeling a bathroom.

Then, the plumber doesn’t get any money so he puts off buying a new drill. And the hardware store loses income, too. It lays off a couple of minimum-wage shelf stockers.

All up and down Main Street, the getting and spending is coming to a stop.

Here’s a note from the oil industry, showing how it works.

Whiting Petroleum Corp.’s bankruptcy shows how pain in the shale patch is reverberating throughout the oil supply chain.

Schlumberger Ltd. and Halliburton Co., which provide rigs and fracking crews, are listed as the biggest non-bank creditors in Whiting’s Chapter 11 filing, each with unsecured claims of more than $8 million a piece. Fellow oilfield servicer Baker Hughes Co. is the 8th largest creditor overall with an unsecured claim of $2.6 million. Other creditors include pipeline operators, a trucking company and a wastewater disposal company, among others.

These are real losses. A barrel of oil from the Wyoming oil fields recently sold for MINUS 19 cents. And the weakest, most-indebted companies are going broke.

Mom & Pop businesses. Big business. High tech. Low tech. Cutting edge. Dull as dirt. Flowers as well as weeds — all of American capitalism is getting shot to bits in the feds’ Coronavirus War.

The coronavirus is damaging lives

The coronavirus lockdown may or may not save lives…but it also damages lives.

Springtime comes to the Northern Hemisphere, but the lovers don’t meet. Who can count the costs?

‘You can’t put a price on life,’ say the talking heads. But young people are beginning to wonder: Is it really worth locking up a million of us so that one sick old man lives a few years more?

‘Here in Argentina,’ continued our friend in Buenos Aires, ‘there are a lot of people — millions of them — who live hand to mouth.

‘And this is in an economy with a 50% inflation rate. They pick through the trash. They wash cars. Beg in the streets.

‘We have a cleaning lady, for example. She depends on that money. But there’s no way to get it to her. They’re not even allowed on the streets. How are they going to survive?’

It is a false dilemma to choose between life and the economy.

Because there will be deaths anyway. So it becomes a statistical question. If a quarantine goes to the extreme, they bury us all. Production will be zero and since we will not have anything to consume, we will all die.

But let us return to our own coronavirus experience…

Quarantined in the valley because of the coronavirus

Argentine president Alberto Fernández announced an extension of the quarantine until April 13. No one is allowed to move about unless for essential purposes.

Since we’re in agriculture, we were able to get a special permiso to go visit our ranch.

So, this past weekend, we walked up the river bank for a half hour or so (this was before we could drive across)…crossed over the footbridge…and there, Miguel was waiting for us with the truck.

Miguel is known as ‘Ojito’ (Little Eye) locally. He’s a small man. But somehow he’s able to reach the pedals of an enormous old tractor. 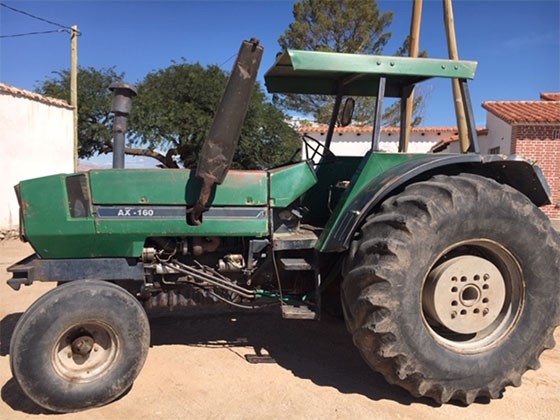 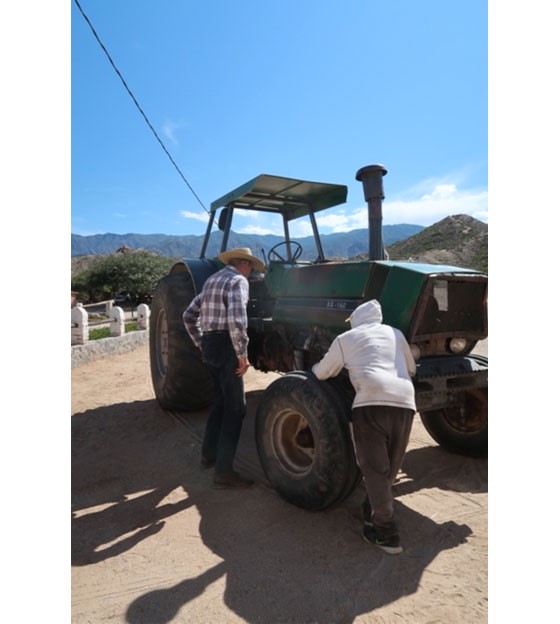 ‘I don’t know if they’ll let you through the roadblock,’ Ojito said as we were leaving the river bank. ‘But you can try.’

And so, we left Ojito in the village and continued on our way, snaking along the riverside until we came to the roadblock.

‘What are you doing?’ asked the guard. Not waiting for an answer to his first question, he came out with another. ‘Where are you going?’

And then another policeman launched his own question. ‘Where did you come from?’

We attempted to answer the questions in order, as best we could. The first gendarme looked puzzled. The second seemed unfriendly.

In the background, in a tent they had made their headquarters, a nurse stood ready with a respirator.

If we were really sick, why the devil were we driving around in the middle of nowhere? We are obviously foreigners; where did we come from? How did we get through all the other roadblocks?

After a series of questions, and inspections of our papers, the first policeman had an insight:

Underway again, we drove up a deserted road and arrived at the ranch a couple hours later.

The reason for our visit was to see what we could salvage from our grape crop.

But each of the landowners pitched in. Each has his own emergency and each has backhoes and tractors. Working together, we were able to put the road in fairly good condition.

But were there any grapes left to pick? That is what we aimed to find out.

We got to the ranch and had a hasty lunch. Then we set out to the little valley, about another 40 minutes further along, where the grapes are grown.

Inspection revealed that only about a third of the grapes had dried out. If all went well, we’d still end up with about 20,000 kilos of grapes. 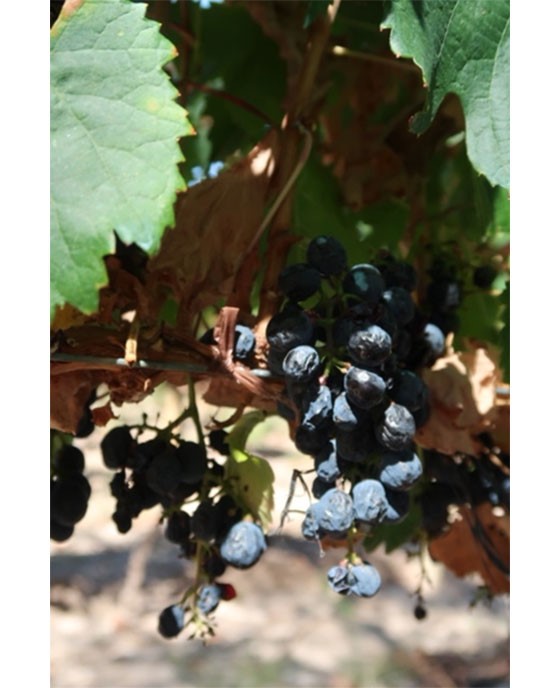 They’ll be extra sweet for having stayed on the vine longer than they should. But the wine might also be extra-rich.

So, the harvest is on! It will take about a week and a half to finish. 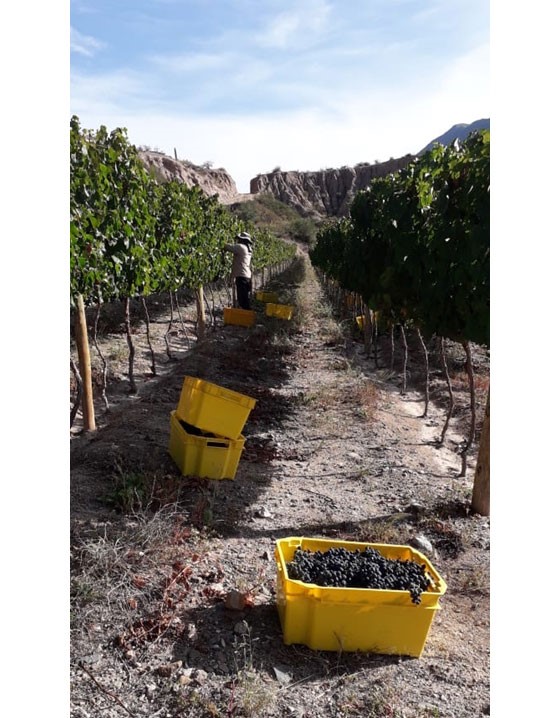 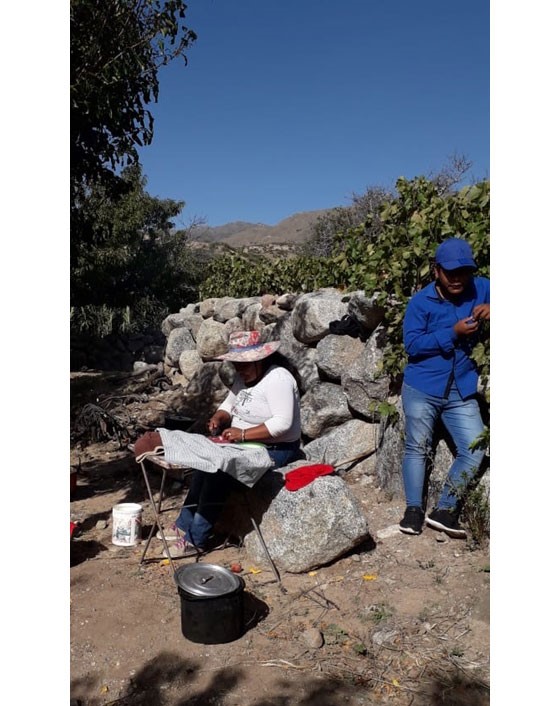 After we came back from the vineyard, we decided to ride up to see our secret garden, an abandoned orchard enclosed by a stone wall, up the valley.

The horses hadn’t been ridden in a while. They were frisky. Unruly. One went too slow. The other too fast.

We followed the river up into the narrow valley, crossing and re-crossing several times to stay on the trail.

Grass and bushes were high, after a good season of rain. The yellow flowers were in bloom. And there was an aroma of sage in the air. 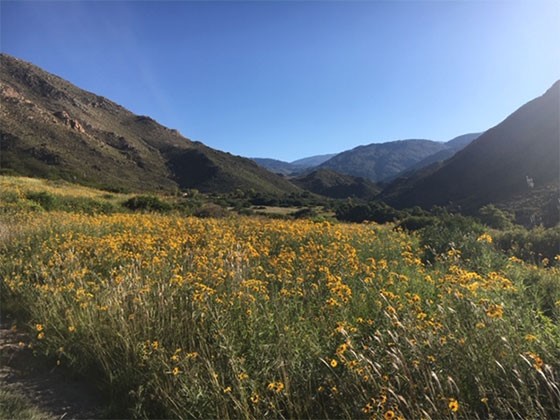 On the way to our secret garden

When we got to the hidden orchard, we knew something had changed. Someone had piled up prickly shrubs in front of the entrance. We tied up the horses and pulled back the briars.

The garden has been abandoned for at least 30 years. A few of the old trees survived…bent over, wild. Like hermits on the edge of a cave…they hadn’t been pruned in decades. Some of the stone walls have fallen down, too.

In the center of the garden, there is a huge rock with morteros on top. The ground level must have been much higher, to allow the Indians to grind their corn on the rock.

As we entered, we found rows of beans…squash…and melons. The plants were separated from the rest of the garden by a fence made of sticks and string, woven together.

On the other side of the fence, there were a few sheep in the pasture…and in the distance…a woman was collecting apples from one of the trees.

We walked towards her; she seemed not to notice. She continued bending over picking up the apples.

She looked up and smiled. It was Sylvia, the wife of one of our ranch hands.

Short, a little stocky, she has bright, intelligent eyes. But conversation was unusually difficult.

‘How long are you staying?’

‘When did you arrive?’

The questions were familiar. But the answers didn’t seem to connect.

‘Are the apples good?’ we asked.

‘Do you read lips?’ Elizabeth asked, pointing to her own.

We continued talking as though we could understand each other, speaking as clearly and simply as we could.

Sylvia seemed to get what we were talking about…and both sides seemed satisfied with the conversation. Then, after a few moments, Sylvia announced that she was going home.

She packed up her apples, slung the sack over her shoulder, and climbed over the wall. In a few minutes, she had disappeared.