The current market turmoil tells me a new era is breaking…

A rider appeared in the distance, silhouetted by the setting sun on one of the hills that separated us from the house.

He rode down the hill towards us as we rode toward him. It was Pablo, the young man who takes care of the cows.

‘You need to come back to the house,’ he said, ‘the police are looking for you.’

This did not sound good.

We’ll come back to our adventures in Calchaqui Valley, where we are waiting out the C virus, in a moment. First, let’s look at the markets…

Yesterday, stocks recovered a little ground, following bi-partisan support for suicidal money-printing. The Dow finished more than 1,000 points higher. But this morning they are falling again, down the limit in futures trading.

The proximate cause of yesterday’s bounce was obvious. Here’s The Wall Street Journal:

The Trump administration said it backs a plan to send checks directly to Americans, likely within the next two weeks, as part of a stimulus plan to help households and businesses hit by the sudden economic slowdown triggered by the coronavirus pandemic.

‘We want to make sure Americans get money in their pockets quickly and small business owners have access to funds,’ said Mr. Mnuchin. He also cited the needs of hotels and airlines. ‘We have an entire package that we’ll be laying out those details today.’

Speaker Nancy Pelosi (D-Calif.) on Tuesday said House Democrats demand that any subsequent legislation to help mitigate the economic impact of the coronavirus pandemic include an expansion of emergency paid leave.

The Senate is currently considering a House-passed bill to help prop up the economy amid the outbreak, but lawmakers in both chambers are already looking ahead to another stimulus package as markets remain volatile.

And the president had given his command: Go bigly.

Steven Mnuchin had an ominous message for Senate Republicans gathered Tuesday in a marble-clad meeting room in the Russell office building: We need to pass a virus stimulus bill, or the U.S. could be looking at a 20 percent unemployment rate.

Mnuchin said the fallout actually could be worse than the 2008 financial crisis, according to three people familiar with his remarks, and called for a package of more than $1 trillion that would include direct payments to everyday Americans.

It would be pointless to mention that it was ‘stimulus’, giveaways, free money, and fake interest rates that got us here in the first place.

But now the Federal Reserve has cut its key rate down to a zero (despite a consumer price inflation rate over 2%) and ramped up its Repo Madness program. And the Trump Administration has now panicked, just like the Obama Team in 2009.

Together, they are going to shower the nation with what used to be called, derisively, ‘helicopter money.’

Like manna from heaven, it falls on the heads of the just as well as the unjust…but generally ends up in the pockets of scoundrels. Like Mnuchin himself, who pocketed millions from the bailout of ’08-’09.

But now, there is no derision sharp enough to make the grifters bleed. They have the support of the Deep State, the press, Wall Street…and every dumbbell on every corner of Main Street America.

It won’t be long before we have a guaranteed basic income, too.

By then, we’ll have bailed out the airlines, the oil drillers, Boeing, hotels, casinos, corporate debt, speculators…and, of course, spared the president another embarrassing bankruptcy.

So far, everything is going according to plan. That is, if the plan is to leave the U.S. economy a godforsaken wreck.

All our worst predictions…our night terrors…our ‘they couldn’t be that dumb’ worries…all are coming to pass — and fast!

But as Andy Kessler — author of The Wall Street Journal’s ‘Inside View’ column — observes, a new era is breaking. And as bad as the bear market/virus attack/recession will be, the new era cure will be worse.

Yes, they are dumber than even we could imagine.

And the 2020 bailout won’t go like the 2008 bailout. A headline at Bloomberg this morning hints at the debacle ahead:

Global Bonds Plunge Ahead of Debt Deluge From Pandemic Defense

Yes, Dear Reader, this is a new era. Of course, it is also a very familiar old era…at least it is familiar here in Argentina.

Here, the gaucho feds routinely spend too much…then borrow too much…then print too much…And then inflation goes through the roof…their bonds collapse…and the whole system blows up.

In a nutshell, that is what is going to happen in the U.S., too. So make sure you keep some financial and social distance. Life is either a tragedy or a comedy. It will be more fun if you can laugh at it.

Back on the ranch

We rode back to the house at a trot. There on the porch was a group that included a policewoman, a doctor in hospital clothes…and a couple other women, one wearing a face mask.

Another group crouched under a tree not far away. They were local men, a couple of whom we recognized as our own farm workers.

‘Hola…What can I do for you?’ we asked as we dismounted in front of them.

‘How long have you been in Argentina? Do you realize that you’re supposed to be in quarantine?’

To the last question, we had the perfect answer: ‘We couldn’t be more quarantined than we are here.’ 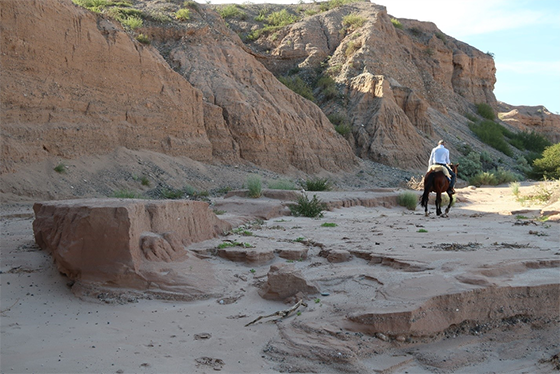 Trotting back to the house 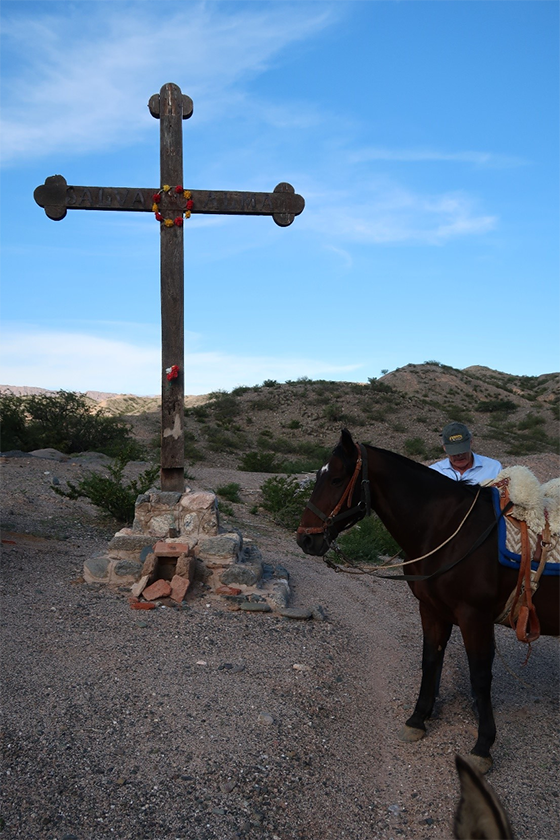 We didn’t mention our sortie on Sunday up the valley.

The team was polite. The fellow in hospital gear was bored. The policewoman remained steadfastly dour. And the nurse with the mask was cheerful. We remembered her from her visits to Gualfin. And she remembered us.

She gave us a copy of the government decree, forcing us into quarantine. We signed it. She asked us to call her if we developed any symptoms of the disease.

And then, they said goodbye. Each of them shook our hands, and the friendly nurse removed her mask to give us a kiss on the cheek. They picked up their things and headed back for the long walk to the footbridge and then over to the other side of the river.

We turned our attention to the motley crew under the algaroba tree.

They approached. The leader then began to speak. But he had such a local accent that we could scarcely understand a word. He spoke. The others laughed. Including our own capataz (foreman), Antonio.

Gradually, his meaning became clear. They had come from Cafayate to work on the screen doors, but one of the men in their group — upon hearing that foreigners might have the dreaded plague — refused to cross the river.

‘He must be loco,’ said Pablo.

‘Well…if you guys will come to work tomorrow,’ we threw them a bone, ‘we’ll keep our social distance. How’s that?’

The next day three of the carpenters came to work. The fourth must have gone home. 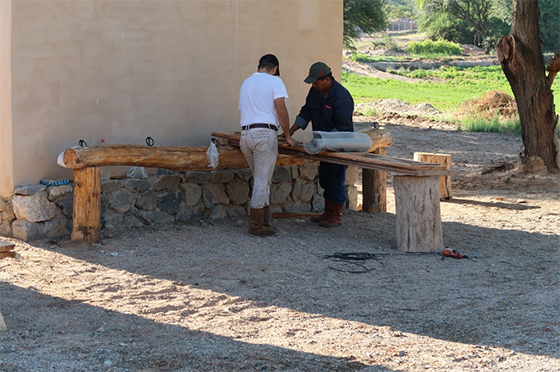 The carpenters at work

America Waits for the Feds to Rescue the Coronavirus-Stricken Economy

This site uses Akismet to reduce spam. Learn how your comment data is processed.