COVID-19 is God’s spear ready to be driven unerringly into our aging hearts!

Yesterday was another exciting day in the markets.

Stocks opened down 2,000 points…then recovered a bit…and crashed again. By the time the bell sounded, the Dow was down almost 3,000 points.

But you knew that. Everyone knows that. Because everyone is watching…and wondering what comes next.

Now, all doubt is gone. This is one mean bear market. So far, $11 trillion has been lost on Wall Street.

But who lost it? Why?

Longtime Diary sufferers will remember one of our most important dicta:

The feds think they can manipulate markets by turning screws and pulling levers. And to some extent, they can.

But markets are not mechanical. They’re moral. That is, moral in the sense of the ‘moral of the story.’

When you go away on a long vacation, for example, don’t forget to disconnect your car battery, or you won’t be able to start it when you get back.

And so, today, word comes from the millennials: #BoomersGetWhatTheyDeserve.

The boomers took over the U.S. government when Bill Clinton was elected in 1993. Then, the federal government owed $4.4 trillion.

Since then, boomers have added nearly $20 trillion to federal debt, along with similar increases to household and corporate debt.

And they invented a fantasy economy, based on unlimited inputs of fake money, fake interest rates, fake expertise…with huge rewards to the old, rich elite…but nothing but debt and disappointment for most people.

Young people now start out in life with student debt…auto debt…credit card debt…and their share of the national debt, too.

The boomers borrowed for free pills, dumb wars, and claptrap programs. And who will pay the debt? Not the geezers.

And now they’re telling young people to stay home…to give up their incomes and their social lives…to protect the boomers from a virus.

But the virus is vengeful and implacable. And it’s coming for us. So is the bear market.

Yes, woe to us…the baby boomers. A pox has been put on our houses. A pestilence loosed on our finances.

We can run from the virus. But we can’t hide from the hideous financial leprosy we caused. It is the biggest challenge of our lives.

Young people will have time to rebuild their finances after the crisis is over. Old people won’t.

After the market crash comes a recession/depression. The airlines face bankruptcy. Oil fell to under $30 a barrel on Monday. The whole shale oil industry is reeling…

Ten trillion of corporate debt — added over the last 20 years — wobbles. Pension funds, insurance programs, and federal finances themselves all begin to stagger.

Most likely, half of the stock market’s peak value will evaporate. Gradually…and then suddenly…the value of U.S. Treasury bonds will fall too.

There will be a lot of blind alleys and head fakes along the way. Stocks may soar, as they did in Zimbabwe at the height of its hyperinflation.

But at the end of this crisis — which could last for five to 10 years — Americans will have lost $30 trillion or more. That is a rough estimate of how much fake wealth was pumped into the U.S. economy since the boomers took over.

One way or another, that fake wealth is going back whence it came…to nowhere.

We wouldn’t bet on it. Our guess is that we’re getting what we deserve…and we’re damned.

Chronicles of the Argentine wilderness

But let us continue the light-hearted chronicle of our own unique situation:

We are enjoying our confinement here in the Argentine wilderness, in a strange and almost magic world.

Our only contact with the outside world is via a rickety footbridge over the Calchaqui River. 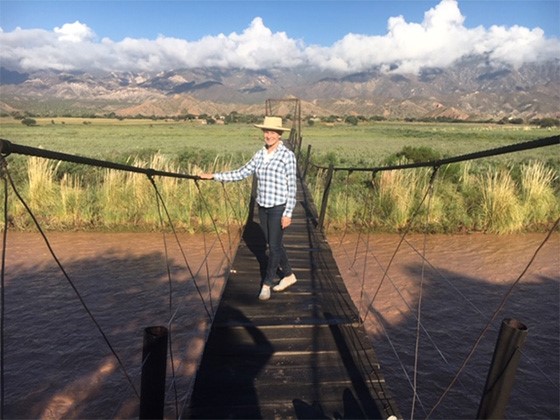 Our connection to the outside world

On Sunday, we walked over the bridge…retrieved our truck, and drove up to the ranch in Gualfin.

The two properties touch each other. But it takes about two hours to drive from one house to the other.

Normally. But the times are out of joint.

The madness in the stock market…the oil market…the battle with the bug et al…seemed to have spilled over into the weather.

This is a desert. But a storm on Saturday night brought so much rain, it washed out the roads and swelled the rivers.

We arrived at the Molinos River about a half hour after leaving San Martín, bumping over deep ruts and gunning our 4×4 through puddles up to the door frames.

The Molinos River is usually dry. But now, water rushes by. It is hard to tell how deep it is. 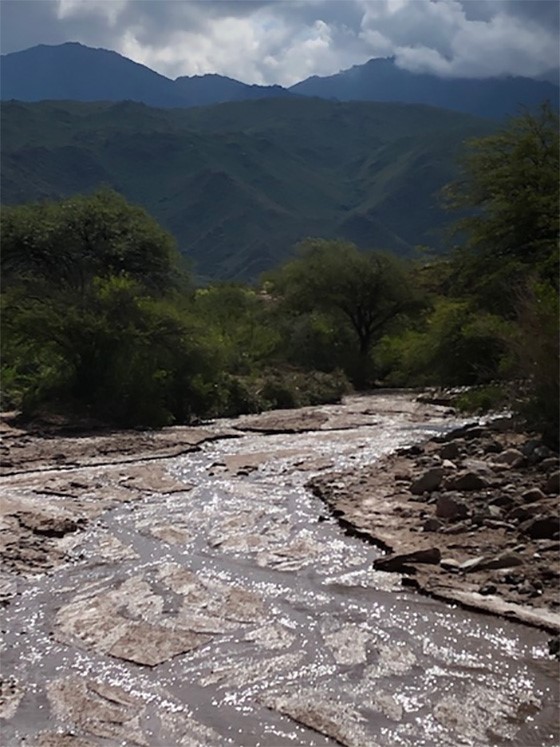 Another river to cross

On the far side of the river we saw a truck and a motorcycle. An old man stood beside the river.

‘No…Nobody’s getting across. Nobody. Where are you going?’

‘Oh…No way…The road is cut. You’ll never get up there.’

Then a young man approached. He had another message.

We decided to take a chance.

‘Can we go with you?’ he asked, as a woman and a small child appeared out of nowhere.

It turned out to be a long, difficult trip. But we made it. 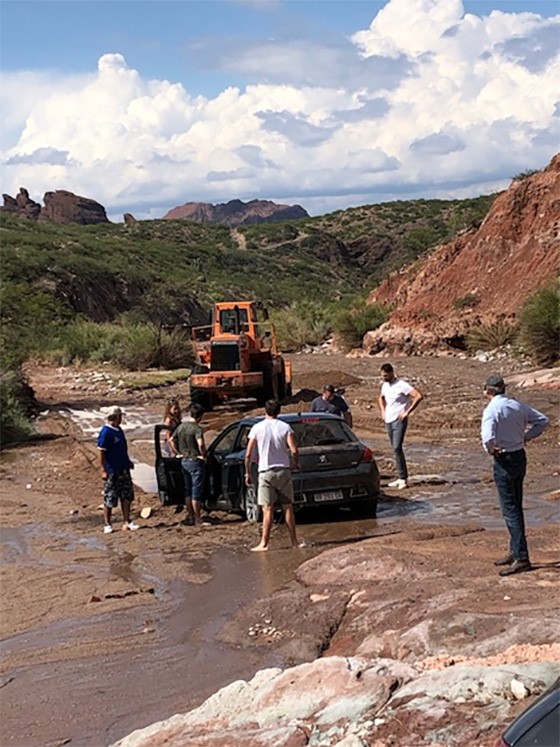 Stuck in the mud…Your editor on the right not helping

But we couldn’t stay long. Storm clouds were gathering. If it started raining, we would be trapped somewhere along the road, unable to get back ‘home’ to San Martín.

So, after a jolly lunch with our friends, we began the descent…and got back without incident.

Tomorrow…the police come looking for us…and the carpenters turn against us.