We will return to the money world tomorrow. But, in short, it is evolving as expected.

The bubble has developed a big hole. The feds are trying to plug it with fake money. Here is the latest from the Wall Street Journal:

The Federal Reserve cut its benchmark interest rate to near zero and unleashed an aggressive set of additional moves aimed at stabilizing markets as the new coronavirus pushed the U.S. economy toward a recession.

They blew it. The Fed panicked and the market is spooked. The S&P 500 registered all-time highs less than a month ago and the Fed has expended all its conventional and unconventional tools. The key takeaway will be that they have truly expended all of their ammunition and this is the action of a central bank that is scared.

In 2008, the mortgage industry had reached too far. The feds bailed it out with more cheap finance. Now, the problem is in travel, energy, retail, restaurants — nearly a third of the workforce.

The feds can boost stock prices, but can they make someone book a cruise or hire more waiters? We don’t think so.

More on what is likely to happen next, tomorrow.

Meanwhile, your editor has a long history of lung trouble. Were he to get in a mortal combat with the C virus, he would put his money on the bug.

Yet by dumb luck he has found a refuge so remote, but still so comfortable and so beautiful…

…it’s as if he’d just been sentenced to three-months’ house arrest… but now he’s looking forward to it!

Flights from America and Europe are now banned in Argentina. The country has a few cases already; it doesn’t want more. Here’s the notice from the U.S. Embassy:

The U.S. Embassy in Buenos Aires strongly encourages all U.S. citizens to reconsider travel to Argentina and advises U.S. citizens with plans to depart Argentina to do so as soon as they can while commercial flights remain available.

We arrived the day the ban was imposed. We spent two nights at a nearly-deserted hotel and then set off for our exile.

‘I don’t know if we’ll be able to get back home,’ said an American woman at the hotel. She and her husband had come as tourists.

But now, being a tourist has become a challenge. Flights are canceled. Events are postponed. Museums, theaters, and bars are closed.

Even here, in far-northwest Argentina, we intended to stop at a well-known restaurant for lunch. But we were turned away.

‘A French tourist showed signs of the virus,’ explained a guard. ‘We had to close down.’

Continuing on our way, we drove from Salta to Cafayate (the center of the wine business in the Calchaqui Valley), and then up the valley to the tiny settlement of San Martín.

Rain had washed out the main road in places. We put on the 4×4 drive and plunged through the mud. But when we finally got to our farm, the river was too swollen to cross.

Typically, when the water is high, we cross either on a tractor or on horseback. But on Friday, the water level was so high… and the current so swift… we could do neither.

Fortunately, there is a rickety pedestrian bridge across the river about a mile downstream. It was a wreck when we bought the farm. It has been repaired, but still feels a little funky. 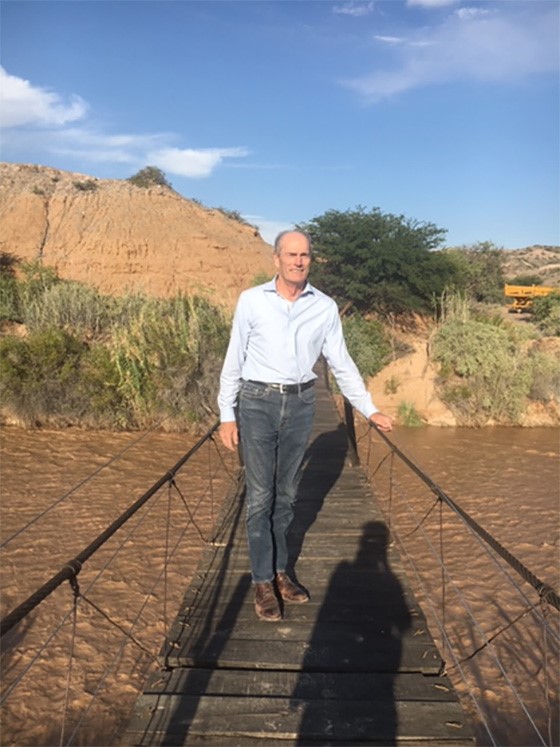 Your editor on the footbridge 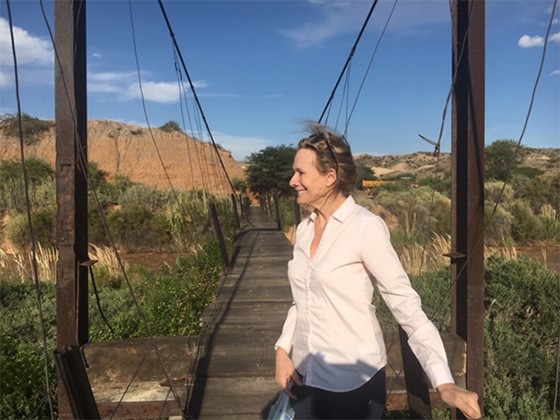 We walked over the bridge and put our luggage onto a wagon, which carried us up to the house. 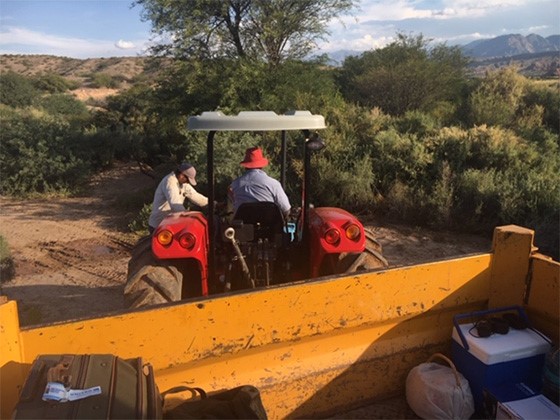 Last leg of the trip

We bought the two farms at San Martín two years ago.

They had been abandoned 20 years before. But it looked like the old irrigation canals could be cleaned out, and the fields cleared, so that we could plant alfalfa.

Our cattle at Gualfin nearly starve to death in drought years. And since there is a rough trail over the mountain, from Gualfin to San Martín, we figured we could drive them down here in the winter months, where they would have more to eat. When they’re not here, we cut the hay and roll it up into ‘rollos’ that we can truck up to Gualfin.

So far, the plan seems to be working. We have about 300 acres of green grass down here… and the young steers that we sell are now twice as heavy as they used to be.

San Martín also had a broken-down adobe house on it. We had no use for it, but it was too nice — an old colonial, with columns all around — to let go to ruin. So, we put a local crew on the case… giving minimal instruction.

Labor is cheap down here; inflation has cut our dollar cost in half. And the materials are all local, too. Floors, walls, and roofs are all made of mud (terracotta on the floors). Posts and beams come from the trees we cut down. And most of the roof trestles were still usable.

So, it seemed as though it would be a cheap and simple project to keep the place from falling down…

But things have a way of getting out of control, especially when you’re not on the job site.

One ‘might as well’ turned into another ‘might as well.’ And when we arrived on Friday, we found that they had rebuilt the old ruin into a delightful and even elegant place to live…

‘What a nice place to enjoy the end of the world,’ said Elizabeth.

It is as if we were just starting out in life. Our only furniture is a bed… and a grand piano, given to us by our lawyer. It took up so much space, his wife wanted to get rid of it.

Talk about social distance! We are in a dry, sparsely-populated area. And we are on the far side of a river, with only a footbridge that most people are afraid to cross.

Nobody is going to ‘drop over’ for a visit. No postman delivers the mail. Domino’s Pizza… Amazon… Uber Eats — we’re out of range of them all.

And we have no reason to leave. Here is where we fatten our calves. We grow onions, lettuce, potatoes, and beets on the farm. We have a spring for water. And we’ve brought down a stock of our own wine — enough to get us through a couple of months.

No conferences. Coffees. Drinks. No PowerPoint presentations. Meetings. Cocktails. No tête-à-têtes. Nowhere to go. Nothing to do.

What a charming interlude! Most of our life is spent getting and spending. But now, we can neither get nor spend. What do we do with ourselves?

A step away from eternity

There’s something romantic about being condemned to a period of vacation… enforced idleness… a pause in the rush of life. It gives you time to listen… to think… to wonder…

Like moments spent in a quiet graveyard… or on the edge of a cliff… you are only a step away from eternity.

In The Decameron, 14th-century author Giovanni Boccaccio sets his tale in an abandoned villa in the countryside, where 10 young people have fled to escape the Black Death.

To pass the time — this was well before TV or the internet — they told tales, some of them so racy that they needed to be scrubbed by translators.

The classic film Casablanca is also set in a place where many people were forced to hide out or hold up… during WWII.

Waiting for visas… for ship passage… for money — they passed the time at Rick’s Café American. It is there where American expatriate Rick Blaine says the famous line: ‘Of all the gin joints in all the towns in the world, and she walks into mine.’

And now, here we are… waiting… and wondering how it will all turn out.

Planning Our Next Move in the Originario War