Getting ready for a cruise? Taking a plane? Going to a restaurant?

Who is that coughing at the next table? He doesn’t look well.

The C virus is now on the loose in the U.S. CBS:

Mr. Trump said the risk to Americans remained very low, but his bid to ease nerves and shore up jittery stock markets in an election year came as officials confirmed the first case of suspected ‘community transmission’ of the COVID-19 disease in the country.

The Centers for Disease Control and Prevention define community spread as the occurrence of cases for which the source of infection is unknown.

And the stock market is getting a serious affliction, too…

Leave it to the French

This morning, we took our usual walk from one end of the beach to the other. It takes about an hour. 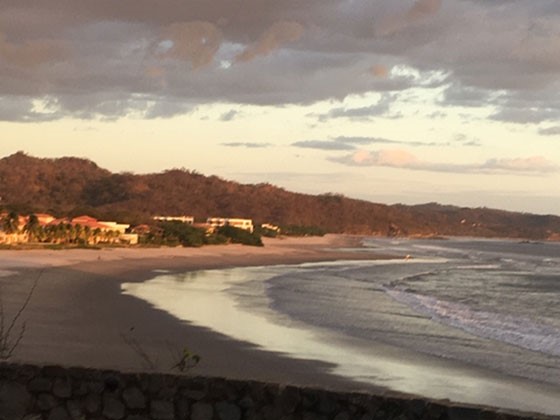 The waves were huge.

‘It’s unusual for the season,’ explained an old surfer friend. ‘But you never know when the big waves will come.’

Typically, as we walk along we watch the birds, the sea, the sand, and the surfers…and we wonder.

Surfers are a scruffy bunch, often covered with tattoos and dressed in baggy shorts and long-sleeved shirts. But there is a group of French surfers on the beach.

Leave it to the French to come up with a chic surfing outfit. The girls wear what look like wet suits, but with the lower part cut away provocatively, like a bikini bottom.

But we stick to our cogitation…

Thinking about the stock market, we ask ourselves: What if the whole thing is a giant bamboozle?

What if the playing field isn’t level, and the Goldman Sachs guys have a huge advantage?

What if Mom-and-Pop investors aren’t really sharing the fruits of American capitalism, and they’re just retail chumps, buying what Wall Street clearly doesn’t want for itself?

And what if stocks don’t become more valuable as time goes by?

We may have some answers…

Front-running the Fed with gold

The Dow lost 500 points in 45 minutes yesterday. It began with a drop…tried a weak comeback…and then closed at the low for the day, the biggest one-day point loss in history.

The old timers don’t like it when stocks don’t bounce. It suggests that there are investors still waiting to get out. And this morning, the sellers are back.

But the feds still have some tricks up their sleeves. Any minute now, we should expect to hear from the Federal Reserve. It will tell us that it is coming to the rescue.

As we keep pointing out, though, the Fed can’t actually rescue anything. It is like a quack doctor with nothing but ‘snake oil.’ All it has is fake money.

But snake oil can work…when people believe it will work. Maybe stocks will bounce. Rally. Even recover. Who knows?

And here is our tip for front-running the Fed:

However much stocks continue to fall…gold will fall less.

If stocks go up, on the other hand, it will be because the Fed has pushed them up with phony money. Gold will go up more.

While fake money (whether in the form of quantitative easing — QE, Repo Madness, or ultra-low rates) may or may not lure investors to buy the dip, it will always make real money (gold) more valuable — at least in terms of the fake money.

Meanwhile, if the sell-off continues, investors are bound to begin asking some serious questions.

Here, we will answer that last question: It is fake wealth created by fake money…

Here’s a shocking tweet from Christopher Cole to give us a clue:

91% of the price appreciation for the classic portfolio over 90 years came from just 22 years between 1984 and 2007. Large capital flows from boomers, falling interest rates (19% to 0) made this happen. Ask your advisor or pension the trillion-dollar question, is this repeatable?

The idea of a long, steady increase in corporate values is a myth. We can see that, too, by looking at our favorite chart. It compares the Dow (the flower of American capitalism) with gold (real money). 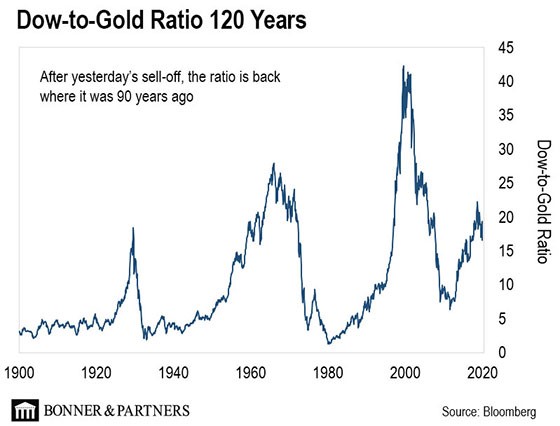 What it shows is that stocks do not go up…and up…and up. Instead, they go up and down!

There was no C virus in ’29 or in ’66 or in ’99. But there were big selloffs. And there are always bull markets and bear markets. Stocks begin in one place…climb mountains…sink into valleys…and then come back to where they started.

Why gold is superior

Today, after yesterday’s sell-off, the Dow-to-Gold ratio is back at 15 — just where it was 90 years ago. So, in real terms investors have made zilch — not counting dividends.

Or, to look at the part of the glass that is half full, investors earned their dividends, and nothing more. The dividends earnings from Dow stocks, for example, averaged almost 3%.

But Dow stocks are the aristocrats of the investment world. Many stocks don’t pay any dividends at all — including almost all the high flyers on the Nasdaq.

The common idea that ‘holding a balanced portfolio of stocks and bonds over the long run’ will make you rich is a myth. That myth is now exploding.

Have a nice weekend.