Are You Ready for Internet 2.0?

Did you hear the news?

Facebook seems to be doing something similar. With billions of users, the social network is tired of just sharing photos and stories. Word is, they’re heading into e-commerce.

Although, I doubt this will upset Amazon much. They’ve already found their new growth industry, according to Bank of America.

And what will that be? Business-to-business (B2B) e-commerce. That’ll be the growth engine for Amazon in the years to come. According to the bank, it could yield trillions for the Everything Store.

But all this probably doesn’t surprise you.

Google, Facebook and Amazon…these are all household names. Flushed with cash and ambition to grow, all three continue to become a larger part of our lives.

But what might surprise you are the roots of all three. They can be traced back to two moments in history. The first happened in 1969. The second was in 1991.

Yes, just two moments in history brought investors gains like the 2,000% in Google and the monster 98,000% return in Amazon.

You might also be surprised to hear that there will be a third event. It’ll be similar to the first two. And from it, you could see a wealth of opportunities spring.

To understand how this is a wealth generating opportunity for you, let’s go all the way back and look at the first…

The A-bomb created an opportunity that went BOOM!

Imagine what it’s like to wake up and not know if there would be a tomorrow.

Not just for you, but for your wife, your husband, your kids, your friends and everyone else that you know.

I’ll try not to be too macabre, dear reader. But this was the reality for most Americans just after seeing the Soviets detonate their first atomic bomb in 1949. 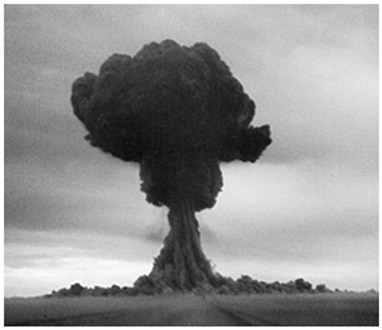 The world was still fresh off the Second World War. Europe was rebuilding from the rubble.

The US was lucky in that respect. Coming late into the war and fighting in foreign lands saved many civilians and cities.

But it would all be for nothing if the Soviets decided to push their big red flashing button.

It’s hard to imagine the pressure of such a situation. More than once during the Cold War, the US and the Soviets almost came to blows.

In 1962, the Americans found a Soviet submarine, armed with nuclear missiles edging closer to the US blockade around Cuba.

Imagine what the world would look like had either side fired. Causalities would not be counted in the millions, but hundreds of millions. And it would all happen in a flash.

‘The report detailed a series of possible nuclear exchange scenarios in which the President would be faced with “decision points” over the course of approximately 26 hours.

‘One scenario described a “nation killing” first strike by the Soviet Union that would kill between 30 and 150 million people and destroy 30-70 per cent of US industrial capacity. Though this might sound like an outright defeat, the scenario described in the secret document envisaged that the President would still be required to issue commands to remaining US nuclear forces at three pivotal decision points over the next day.’

30 to 150 million Americans gone…in a flash. How do you come back from that?

And this wasn’t even the worst-case scenario. Worst-case would be if US forces had no means to retaliate. So, if the Americans couldn’t prevent missiles from flying, they at least wanted to know when a Soviet attack was imminent.

And what if a first strike from the Soviets knocked out the US’ ability to communicate retaliatory strikes of their own?

‘A nuclear detonation in the ionosphere would cripple FM radio communications for hours, and a limited number of nuclear strikes on the ground could knock out AT&T’s highly centralized national telephone network. This put the concept of mutually assured destruction (MAD) into question.

‘A key tenet of MAD was that the fear of retaliation would prevent either Cold War party from launching a first strike. This logic failed if a retaliatory strike was impossible because one’s communications infrastructure was disrupted by the enemy’s first strike.’

In either case, the US had to ensure their communication infrastructure was fast and operational, even in the case of total mass destruction.

The problem was, they had no way of knowing that communication lines would work if central towers were blown up by the Soviets.

So, in drastic times, US politicians looked to their intellectuals for drastic solutions. The only way they could ensure the safety of the American people was to prevent an all-out nuclear war. And the only way to prevent war was to develop a whole new communication system.

That’s when researcher Paul Baran had an idea. Instead of centrally controlling towers that were integral for the system to work, he set about developing a communication system that mimicked the human brain.

There would be no central point. Any node in the system could relay information to any other node. So even if large chucks of the structure were wiped out by an explosion, the remaining nodes could still send information to each other. 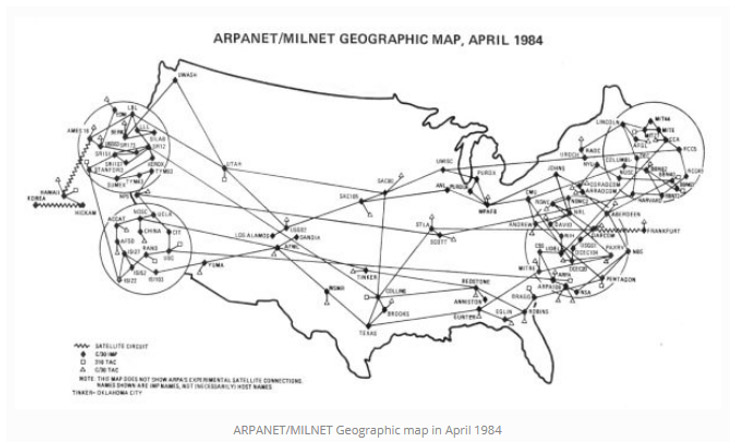 ‘In his memorandum of 1962, “On Distributed Communication Networks,” Baran described how his network worked. Messages travelling across the network would not be given a pre-defined route from sender to destination. Instead they would simply have “to” and “from” tags and would rely on each node that they landed at on their journey across the network to determine which node they should travel to next to reach their destination in the shortest time.

‘The nodes, by a very simple system that Baran describes in less than a page, would each monitor how long messages had taken to reach them from other nodes on the network, and could relay incoming messages to the quickest node in the direction of the message’s destination. By routing the messages like “hot potatoes,” node-to-node, along the quickest routes as chosen by the nodes themselves, the network could route around areas damaged by nuclear attacks.

‘…This proposal was radical. Baran was suggesting combining two previously isolated technologies: computers and communications. Odd as it might appear to readers in a digital age, these were disciplines so mutually distinct that Baran worried his project could fail for lack of staff capable of working in both areas.’

The folks over at AT&T were up in arms about the idea. Build a whole new communication network? And have it be digital?

The idea was so laughable it made the men at AT&T angry. Here was this researcher, with nothing more than a theory, telling them how to do their job.

You see, AT&T was still on an analogue communication system. They scoffed at this new digital network because they had no idea it would work in practice.

Even when Baran said it would only cost US$60 million to build, AT&T again dismissed the idea. No, no, they said. You can have your digital fantasy. Leave us alone to work within the boundaries of reality.

It would cost AT&T US$2 billion that year to maintain their analogue network.

But just three years later in 1969, Baran’s vision did became reality. A company by the name of Bolt Beranek and Newman, Inc started to build the Interface Message Processors.

Most of you will have caught on.

Baran’s revolutionary idea was an early concept of the internet. And it was the first moment in history.

Today, the net fully encompasses our lives. It’s changed how we live and interact with each other. It’s also created the opportunity for companies like Google, Facebook and Amazon to exist.

Baran can’t take all the credit, though…

I asked you before to imagine what the world would look like had the Cold War heated up. Well, now I’m going to ask you to do the same thing for the Web.

What does the world look like without the World Wide Web: a collection of information-rich pages that sits atop of the internet?

No YouTube. No Wikipedia. No Facebook or Amazon. And especially no Google. You could say the latter three owe the mere opportunity for their success to this guy… 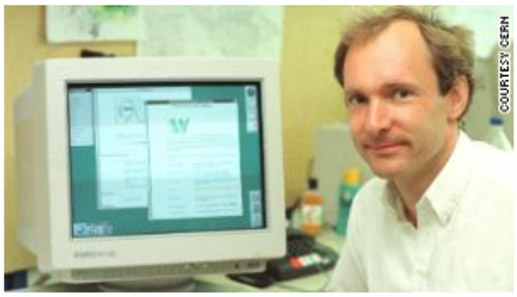 This is Sir Tim Berners-Lee. He’s often called the father of the Web.

And back in 1991 (the second moment in history), he, along with top researchers, developed the Web. The idea was to make it easier for researchers to share information.

You might also remember last week, I mentioned that the Web was far from finished. We’re bound to see many iterations. You might want to think of the Web as still in its adolescence…even 30 years on.

Berners-Lee tends to think so too. He’s already waiting for the next evolution in connectivity.

Call it the Internet 2.0. And from it pours a wealth of new opportunities, ideas and technologies.