Former Yankee owner George Steinbrenner once said that owning the New York Yankees is like owning the Mona Lisa.

Yet the network covering this priceless baseball team, the YES Network, is about to go for a steal, according to Bloomberg.

Well today, that’s truer than ever. And it’s because of how much more spare time we all have.

While most of us still work nine to five, others work five to nine, devices like smartphones fill up all the spaces in between.

In the car, on the train, on your lunchtime walk or just before bed. There are some of us who want constant stimulation. And companies like Netflix and Disney are too happy to oblige.

It’s why they’ve gone on a content spending spree. Buying up as much as they can and developing their own.

The only reason the YES Network is up for sale is because Disney needs to cut the fat. They’re in the process of a US$85 billion merger with 21st Century Fox. And regulators won’t let Disney keep the lot.

Too bad. It was Disney’s most valuable regional sports channel. And now it might go for pittance.

How about 1-times EBITDA?

The Yankees themselves, backed by Amazon and Michael Dell’s family office, intend to pay 7.4- to 9-times earnings before interest, taxes, depreciation and amortisation (EBITDA) for the network.

According to Bloomberg, ‘that’s low’.

Yet we know plenty of stocks trading at similar multiples that would completely fail the cheap test. Aussie stock, Graincorp Ltd[ASX:GNC] is one.

They trade at about 7.9-times EBITDA. They also have a PE of 30. Invert this, and that’s a messily 3.3% return on your money, assuming no growth.

Still want to tell me 7-to-9-times EBITDA is cheap? How about 1-times EBITDA? Surely that’s better?

‘The potential acquisition reportedly values the YES Network at $3.5 billion,’ the outlet writes.

‘Sure, Disney is in the unfortunate negotiating position of being a forced seller. But broadly speaking, M&A valuations in the U.S. have also come down sharply in recent months from all-time highs as a five-year deal making frenzy has started to cool off.’ 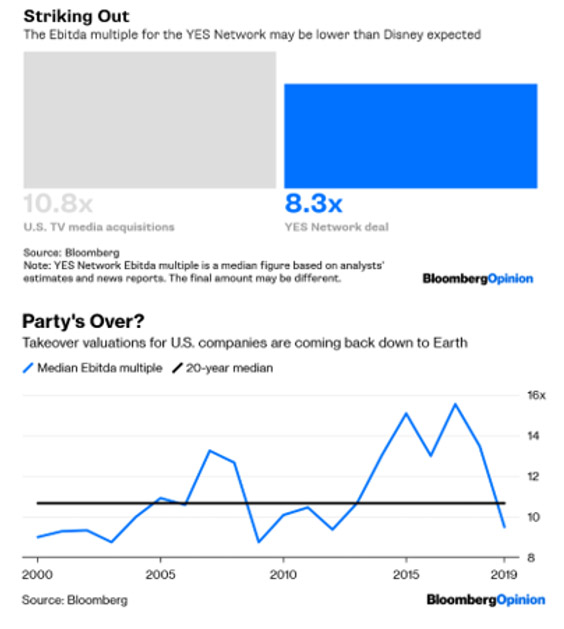 Yet I would argue that it’s about time things cooled off. Bond prices, stock prices, house prices and even private market tractions (mergers and alike) have all exceeded their normalised values.

And it’s all because of the banks.

What do you think happens when central banks say they’re going to stimulate the economy? It means they’re going to pump more money into the system. Initially, this will be indirectly through commercial banks.

Central bankers might lower reserve ratios. Or they might beef up actual reserves for these commercial lenders to pump more money into the system.

Keeping interest rates low just means that the quantity of money that’s about to flood the economy will be taken up with gusto.

This is how you get companies paying ridiculous prices for other businesses. Debt financing is cheap. The cost of raising funds goes down. So now, management can justify spending 15-times EBITDA to expand operations.

Yet few stop to think what higher interest rates will do to their barely profitable purchase. But what does management care? They’re on a contract, they get their stock options. Why not try to pump up the stock while they can?

Aussie Fundie Roger Montgomery also hinted at this in a recent Livewire article. When money is cheap, and optimism is high, then often bad deals happen. Here’s a snippet of Roger’s take on Appen’s recent acquisition:

‘ASX-Listed crowdsourced data company, Appen (ASX:APX) has just announced its intention to purchase Figure Eight for its “Leading Tech Platform.” Appen will pay US$175 million upfront, which is circa 5.7 times 2018 revenue. It will also pay up to another US$125 million in March 2020 on outperformance of incremental 2019 subscription revenue targets.

‘…Side note: Appen’s acquisition is being made within the context of a booming market for technology companies. A veritable tidal wave of ‘unicorns’ — tech start-ups worth more than a billion dollars — are preparing to go public this year. Companies including ride sharing competitors Lyft and Uber are expected to list as is Postmates, Pinterest, AirBnB, Peleton, Zoom and Slack.

‘…And despite the apparent maturity of these businesses and their multibillion market valuations, in 2018, 83 per cent of IPOs were by unprofitable companies, which is the highest on record since 1980.’

Persistently low rates are no fun

The other option for central bankers is more direct. They can enter markets themselves, usually fixed income, and start buying or selling.

Buying bonds pumps more money into the system, selling takes more cash out. The idea is to transfer cash to and from bond holders, who will hopefully spend or save. But of course, the outcome is never what was intended.

Now, we see central bankers all over the world pause in their move towards monetary tightening (higher interest rates). Here in Oz, the 10-year bond yield recently fell below 2%.

That means there were more buyers of Aussie 10-year bonds than sellers, thus making the yield (return) fall.

What does this mean? Maybe that investors believe the next move for Aussie interest rates is down. 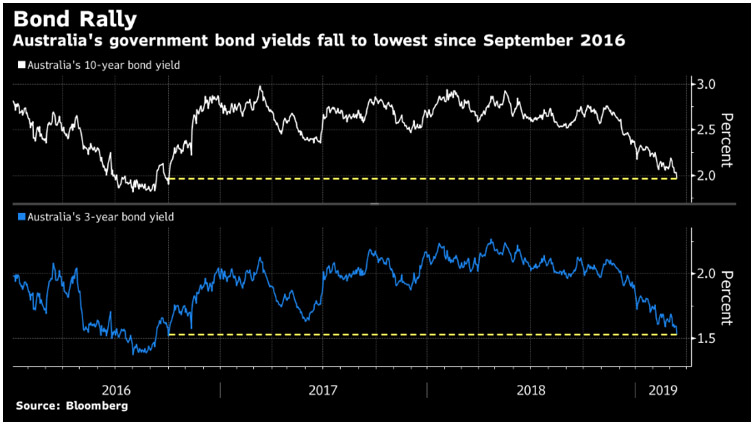 The Reserve Bank of Australia might even do some bond purchases of their own. And if that happens, then the bond buyers now could see their holdings rise.

Yet you only need to look to Japan, dear reader, to see how effective such a strategy is. 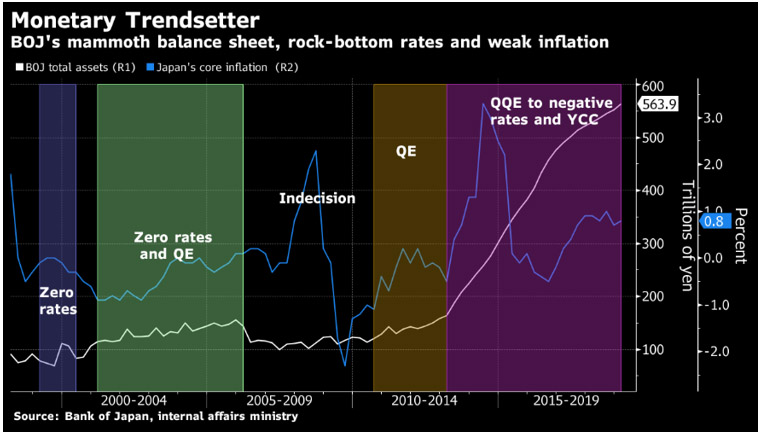 ‘As global economic growth wanes, Europe doles out a fresh round of easing and the U.S., Canada, Britain and Australia put rate hikes on hold, economists are asking what more can be done with scant room to lower borrowing costs and already swollen balance sheets,’ Bloomberg writes.

If the result is persistent low rates globally, then maybe the YES Network purchase will work out for the Yankees, Amazon and the Dell family office.

It will just be no fun for stocks. We’re already flying high.

Where can we go next?

Planning Our Next Move in the Originario War