That’s what my wife tells me.

She’s got a point. I always feel easier jumping onto a big name like Emirates, Qantas or Qatar. And I bet I’m not the only one.

I have no idea whether these planes are more or less likely to go down than others. I’m sure there are statistics out there.

But imagine the horror travellers now feel after watching a Boeing plane crash…again.

Boeing’s bestselling model, the 737 MAX 8, crashed in Ethiopia on Sunday.

Months before in October, another 737 MAX went down in Indonesia. No one survived.

Yes, this is Boeing. The American aircraft icon that produces most of the planes every carrier uses. The Federal Aviation Administration (FAA) is still investigating. They’ve found nothing so far.

Governments were quick to ground the particular planes. They don’t want to take the risk of being the third Boeing incident.

I just wish we could ground these stock prices…

The slowdown is almost over, Credit Suisse’s John Woods says. Now, as central banks around the world pause, it could be go-go time again.

Woods did warn ‘that the most reliable predictor of a recession in recent financial markets history – an inverted yield curve for US Treasuries – still hangs over the global economy, and argues that it’s a matter of when, not if, a recession hits,’ the Australian Financial Review (AFR) writes.

We’ve also seen central bankers in Europe change policy. At first everything seemed fine. The Eurozone was out of the woods, ready to grow again.

But recent actions tell another story. Clearly the recent historic bond binge experiment the Europeans were on wasn’t enough.

It’s why the European Central Bank (ECB) is now pumping even more money into the system.

In the years before, the ECB bought European sovereign bonds by the trillions. The idea was to transfer newly created money from the central bank to bond holders.

The newly created cash would start in the hands of bond holders, but then trickle into all the corners and crevasses of the Eurozone.

Of course, this is not what happened.

Bond prices rose. Returns on bonds got squeezed. Investors jumped over to stocks. Everyone else saw stock prices rising and piled in.

What they got was not vibrant economic growth, but vast sums of money (trillions) trapped in financial markets instead.

It only takes one event to scare investors out of these markets. Then, KABOOM. It all comes crashing down and not even all the kings’ horses or all the kings’ men can put Europe back together again.

This ineffectual method of growing economies is one of the reasons why Europe continues to disappointingly plod along. The recent U-turn in policy is not a reversal, the ECB was quick to say.

‘We are adjusting to the new reality rather than reversing our course; we don’t see signs of a recession at present,’ ECB board member Benoit Coeure said.

‘Woods, in Australia this week to talk to local investors, told Chanticleer that the Federal Reserve’s sudden switch from a tightening bias to a pause over December and January was warranted.

‘“It was a particularly unusual confluence of events,” Woods says of the Fed’s sudden U-turn. “But I think it was largely a function of a perception of the depths of the potential slowdown that allowed the Fed to go on pause and become a bit more data dependent.

‘“This is a particularly serious deceleration in industrial production.”

‘Woods says disruption in the US, European and Japanese automotive sectors weighed on global industrial production, as did some weather events.

‘But the trade tensions between China and the US have also had a big impact in recent months.’

But how much power do central bankers have really?

It’s often said these financial men are working with the bluntest tool in the shed. Interest rates, or the price of money is not powerful enough to lift economies up alone.

Much of the heavy lifting comes from the quantity of money, and where in the economy it goes. If that money goes to businesses to create more goods and services, then hey presto! The economy grows.

But this is not what happens. Central bankers don’t encourage or incentivise banks to make more value-added loans. And they don’t disincentivise loans for speculation or consumption, the stuff that creates asset bubbles and our boom and bust cycles, either.

But it’s just how it is. These are the rules of the game. And we can’t change them, for now at least. So, with all this in mind, where should you be looking in the market today?

Where to look next…

I believe ‘cheap’ will matter far more than it has in the past.

What I mean by that is you won’t be able to confidently buy the stock trading at 40 times earnings without being quickly slapped into reality. 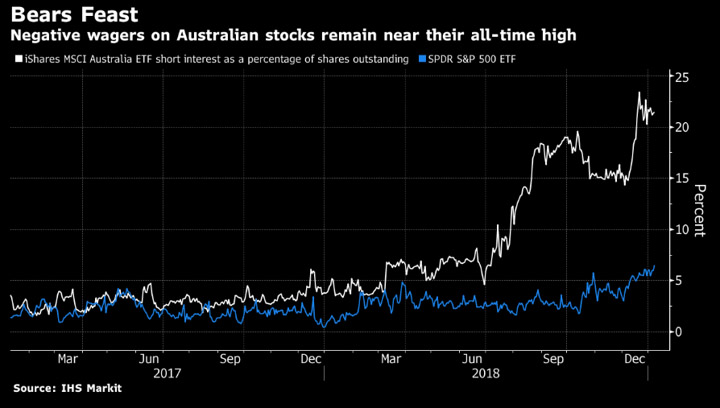 Yet here we are, up double digits in March.

Adding fuel to the fire is Philip Lowe, head of the Reserve Bank of Australia (RBA). Lowe, like many other central bankers, gave momentum to the idea of lower rates and investors have responded by lifting stocks even further.

Take this one with a grain of salt, but according to a widely watched momentum signal, Aussie stocks just recently entered the overbought camp. 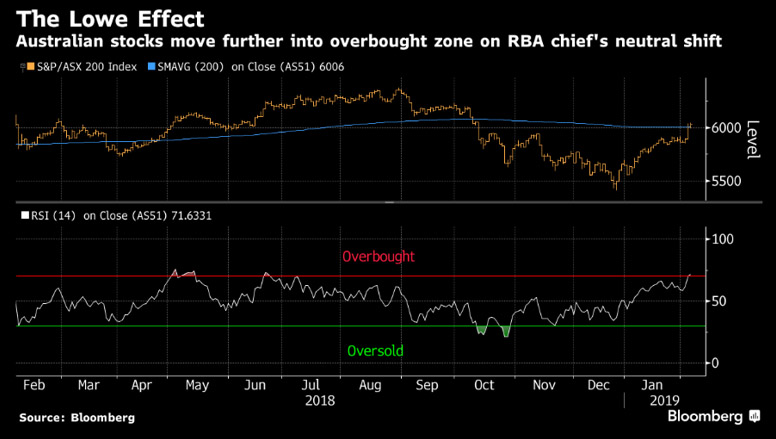 Add to this lower investment from Aussie businesses. The data shows Australian businesses have slashed their investment plans for the next 12 months. This cut on investment could keep earnings at a standstill, or even worse cause them to fall. 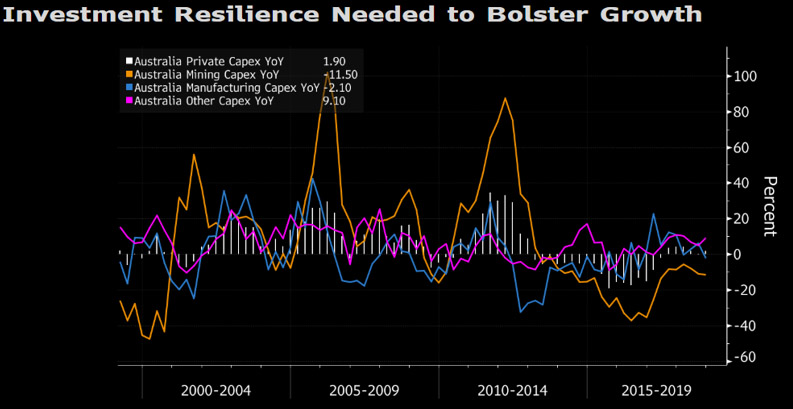 This is why I say ‘cheap’ is now more important. Earnings could go lower. Stocks are being pumped up. And, as history tells us, this divergence can only last for so long.

One of two things has to happen. Either earnings can rise, or stocks can fall. Which one do you think is more likely?

And which stock, cheap or expensive, do you want to hold when the latter happens?

Subscribe now to get our members-only podcast — ‘Digital Gold: Should You Add Cryptocurrency to Your Portfolio?’ And receive the investor’s newsletter capturing the most decisive financial events that could impact your wealth.

Sign Up for Free Access to Our Podcast Radio Series — 'Digital Gold: Should You Add Cryptocurrency to Your Portfolio?'