The Donald Is More Powerful than Interest Rates

The Donald makes bold claims. But he knows what he’s doing.

The US ‘is booming like never before,’ he said. Other countries are ‘doing very poorly, and that makes it even harder for us to be successful’.

You might remember that Trump has linked his success as president to the economy.

If the US economy is doing well, it’s all because of Trump.

If the economy, or even the stock market hits the skids, then it’s the Fed’s fault.

Right now, two things are making Trump upset. Higher interest rates and a strong dollar. Both of which are conveniently out of his control.

The first is thought to reduce economic activity. I’ll explain why that’s not entirely true later on. The second makes it tough on American exporters.

With a strong dollar, American goods become more expensive compared to international alternatives. So the trade community shift their purchases from America to somewhere else.

It’s why Trump continues to say the American economy only has one problem.

I think Donald is spot on, for the most part.

The Fed maybe thinks they know what they’re doing. But they have no idea.

I’m not sure Trump would fare much better, though.

But in a master stroke, he’s shifting any economic blame from himself onto the head of the Fed, Jerome Powell.

And he might get his wish very soon…but first a recap.

Yesterday I wrote about the last two months of stock market activity. You know what it told us?

Investors at large have no idea what they’re doing some of the time.

And it’s during those times investors like you can clean up!

There’s a whole bunch of reasons. A major one is our flawed human nature.

Humans hate crap businesses, but they love goods ones. And so they should. But they tend to oversell the crap and over buy the good.

Unless you’re quick to the latter, then buying the former isn’t such a bad idea.

But no one does that. Buying crap makes us squeamish. Its makes us stressed. So many of us miss out on the one-time gains because we couldn’t bring ourselves to buy something so disgusting.

Yet when reality kicks in for that crappy business and things turn out better than expected, that’s exactly what happens. Investors revalue stock, sometimes multiple times higher.

The Fed can lower interest rates. They can pump cash into the system. But if investors don’t want to borrow the economy is not going to grow.

We’re told that investors are rational. They all have perfect information. They have the same time horizon. And they all interpret new information the same.

These are the kind of assumptions academic models rely on. And it’s complete utter crap.

We’re also told investors borrow when rates move down. But that isn’t always the case either. [openx slug=inpost]

‘The wild cards of both trade and Brexit certainly resonate with the Federal Reserve. Last week chair Jay Powell cited both issues during his semi-annual testimony before Congress as reasons why the US central bank should be cautious.

‘Mr Powell’s focus on maintaining a supportive tone for markets may be tested should important economic data show signs of resilience — a risk flagged to some extent by this week’s rise in Treasury yields.

‘For now, the dovishness of central banks led by the Fed explains why equity markets are looking beyond the risks posed by a breakdown in trade negotiations or a hard Brexit, as such outcomes might prompt greater monetary stimulus. This insurance wrapper known as a “policy put” helps explain the current moribund state of implied volatility for equities, bonds and currencies.

‘The policy put has other variations. There is a market view that the US and China will reach a deal on trade, given President Trump’s desire not to sink the stock market.’

Australia’s central bank seems to be on the same path.

The Aussie economy grew at 0.3% over the September quarter. While it’s still positive, it’s far below what we saw in the first half of 2018. Have a look at growth on a per-capita basis and the picture looks even worse.

It’s because there’s a ‘lack of productivity,’ as IFM Investor Chief Economist, Alex Joiner notes. Gross domestic product per hours worked has fallen in six of the last seven quarters. 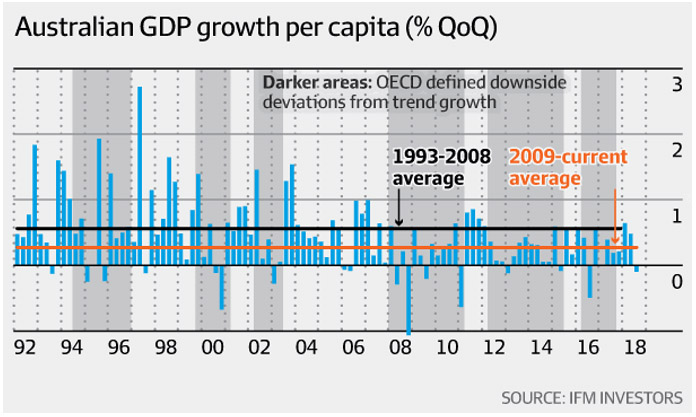 And it’s got Lowe thinking about rate cuts instead of hikes…potentially.

Lower rates and easy money won’t help either Aussies or Americans. The only way both economies are going to grow is if investors and borrowers feel confident about the future.

The price of money (interest rates) is only half of the equation.

While it makes sense that borrowers would borrow more when money is cheap, this is not always the case.

Just like holding their nose when they race past disgustingly cheap stocks, investors and borrowers also give up chances to borrow cheap money.

And it’s mostly to do with their perceptions of the immediate future.

‘When you look at firms, I think, one of the things that we teach people, and will continue to teach people, is that interest rates matter.

‘There is enormous discussion of interest rates. They do matter for the distribution of income, but nobody has ever been able to detect an interest rate effect on demand for investment or household savings…Risk perceptions dominate among institutions, their concerns in making investment decisions.’

‘For instance, the German economic growth rate is much more highly and positively correlated to interest rate than interest rate: i.e., 0.6906 vs. 0.3907.

‘The same is observed in all other countries. Interest rates appear not to ‘lead’, but to ‘follow’ economic growth.’

That’s why a few strong words from Donald might do a world of good.

Borrowers and investors not only need cheap money, they need confidence to put that money to work. If they look around and everything looks risky, why would they borrow to lose money they’ll need to soon pay back?

So even though Trump might not be 100% right when he says the US is ‘booming like never before’, he might get something close to it if he just says it over and over again.