Bigger Than Facebook: Stake Your Claim in the AR Trend Today

Last week, I had a sneak peek at the future of a future technology — augmented reality (AR).

If you’re not familiar with the idea, it can be described as computer-generated images superimposed over a person’s view of the real world.

In other words, you could wear glasses and see through them, but you’d also see some ‘extra’ things. They’d be virtual and would sit within the real world you’re seeing.

Popular mobile app Pokémon Go, is a great example of how AR can work on your phone.

See the picture below? The app has overlaid a generated image of a ‘Krabby’ on top of the real world. 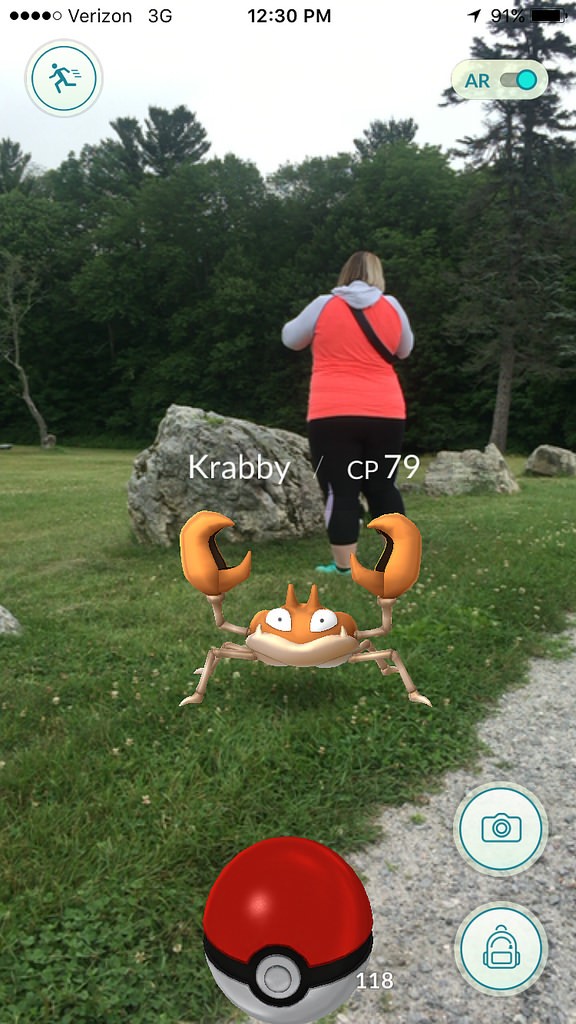 A little bit of fake mixed with the real. The result can be stunning and certainly shows incredible promise.

Imagine you’re a car mechanic. If you throw on these AR googles, you could look at the engine bay, and each part would be labelled in your vision. You could take it a step further and download different functionalities. So, as you’re replacing the spark plugs, your glasses are highlighting and labelling each part you need to remove, what size spanner is needed, how hard it needs to be tightened, etc.

Theoretically, you could do any kind of fix without any previous know-how.

A shopper could see prices and available sizes as they browse through products.

An architect could design — and walk around inside — a house she designed on a computer.

A tourist could stroll through a museum and have handy explanations appear beside the pieces.

Students could walk amongst the planets. Soldiers could visualise outlined threats. Businesspeople could see their schedule and inbox while walking through town.

It’s really an incredible future…and it’s already at our doorstep.

The experts reveal their research

Last week, I had the chance of discovering what comes next. The Auckland Bioengineering Institute hosted two pioneers to describe it: Professor Mark Billinghurst and Professor Aaron Quigley.

Their point was clear — these kinds of technology won’t ever catch on unless we can make them discreet.

As it stands, AR typically requires some goofy-looking equipment. Big goggles like Amelia Earhart wore. Cords and cables to connect sensors and battery packs. Handheld controllers to interact with the virtual aspects.

People might guess that you were preparing for space travel, not checking your email.

Thus the solution — according to Billinghurst and Quigley — is to develop AR in a way that it would be unobtrusive and inconspicuous. Ideally, you wouldn’t be able to distinguish between someone using AR and anyone else.

One interesting solution that they revealed was a system that you’d control completely by scratching your nose.

Let’s say you’re on a boring date. So you’re secretly watching Die Hard during dinner. You want to pause the movie so that you can order. But you don’t want to give it away by using a controller…or by pulling out your phone. So what do you do?

A slight scratch on the right side of your nose and the system reads that as ‘Pause’.

It’s that easy! And your date would be none the wiser. Yippee Ki Yay.

Can I make money here?

As a reader of Money Morning New Zealand, you’re probably wondering how you could invest in such a promising trend…and unfortunately, I’m afraid it’s almost TOO early for you to get in on this trend.

The companies doing the most work in this area are tiny start-ups. They’re working out of university labs or coworking spaces. The AR/VR Garage in Auckland is one such place.

But, for the most part, these companies are too tiny to be considering listing…

An exception in Australasia is Thred Ltd [ASX:THD], but they’ve experienced a disappointing fall from grace since their IPO in 2014.

Besides investing in AR companies themselves, you could keep a careful eye out for bigger companies incorporating that technology in their businesses.

Air NZ [NZX:AIR] is a good example. They’ve recently teamed up with US-based innovator Magic Leap. They’ve begun developing an AR experience that lets travelers enjoy an immersive trip through New Zealand’s wonders. You could see it available on your next flight as early as this year.

Team New Zealand has also announced that they’ll be bringing live AR or VR to fans during the America’s Cup. You’ll likely be able to plop on a pair of glasses and see everything that’s happening on the boat.

To make it happen, Spark [NZX:SPK] is developing a new 5G network to help these kinds of data transfers possible.

There are lots of ways to tap into growing trends like augmented reality. The question is whether you’re able to pick out those opportunities before everyone else finds out too.

It won’t be long before we’re all walking around wearing glasses, watching the game during work meetings, changing our own spark plugs and scratching our noses.

It sounds far-fetched, but I’m confident, especially after hearing Billinghurst and Quigley’s presentations, that this will happen sooner that we realise. In this generation, certainly. Perhaps within just a couple years.

I’d keep an eye out for a way to stake a claim soon.

Taylor Kee is the lead Editor at Money Morning NZ. With a background in the financial publishing industry, Taylor knows how simple, yet difficult investing can be. He has worked with a range of assets classes, and with some of the world’s most thought-provoking financial writers, including Bill Bonner, Dan Denning, Doug Casey, and more. But he’s found his niche in macroeconomics and the excitement of technology investments. And Taylor is looking forward to the opportunity to share his thoughts on where New Zealand’s economy is going next and the opportunities it presents. Taylor shares these ideas with Money Morning NZ readers each day.