Come with us, Dear Reader…We are about to launch on an excursion.

We will swing our arms gaily…and bend our heads towards the heavens, hoping for a fair wind and a clear sky.

Wandering around, we’re not sure where we’ll end up, but we expect it will be fun.

The more you travel, the more you want to travel light. And that means we need to dump the heavy claptrap out of our luggage. The more ground we cover…the more we discover we don’t really need it. We find plenty more wherever we go.

For every dumb thing you see in your home country…you see many more overseas. For every jackass politician in Washington, you find dozens more in Paris, Buenos Aires, and Rome. And for every dopey idea you hear…

…well you get the idea.

But watch out. Because travel can be disturbing. You also find people who are smarter, richer, and more cultured than you are.

You find cities that are more liveable and more agreeable than your hometown. You often find cheaper drinks, better parking, and less annoying public employees. Most important, travel raises questions, notably: Who are we?

An interesting article on ‘us’ appeared in the The New York Times last summer. In it, Colin Woodard outlined his research. As it turns out, America is not one nation. It’s more like 11:

‘These were the dominant cultures that Native Americans, African-Americans, immigrants and other vital actors in our national story confronted; each had its own ideals, assumptions and intents.’ 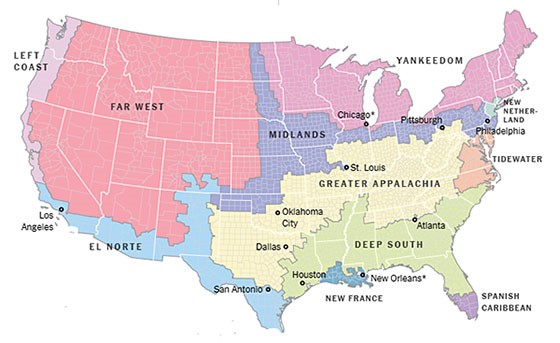 As you can see, there are any number of ways to slice and dice us home-grown Americanos. That is, there are a lot of different ‘us’-es.

Culturally, people from Richmond and Raleigh have more in common with each other than they do with people from El Paso or Portland.

As for the machinist from Milwaukee, who is he? What does he think? What does he dream about? What does he want? Is he more at home with other metal workers from Hamburg, Germany, or with the welfare recipients and drug dealers of West Baltimore?

And how about you, Dear Reader? Who are you? Where do you fit in?

If the answer seems obvious, put on your walking shoes; you need to get out more.

We left Paris last Thursday and took the long flight down to Buenos Aires. The weather was beautiful in the city on the Río de la Plata…So we got in a cab to go to Puerto Madero, a lively and modern part of the city, with sparkling shops and high-rise apartment houses built around an old harbor.

By the time we arrived at our restaurant — about 30 minutes later — we had a better idea of what was going on in the country.

‘It’s easy to get elected here,’ said the driver. ‘All you have to do is promise a lot of free stuff. But the government doesn’t have the money, so they borrow…And when they can’t borrow any more, they print more currency. And then, prices go up…people get mad…and they vote in the other guy, the other party.

‘But the poor new guy, President Macri, now has to cut spending. And so the people blame him for cutting off their free stuff. And then you have strikes and demonstrations…And then they vote the big spenders back in.

‘I’m afraid that the next election might bring back the Kirchneristas [followers of ex-president Cristina Fernández de Kirchner] and then we’re going to go downhill, just like Venezuela.’

The cab ride cost only $5. The economic analysis came at no extra charge.

We would have liked to stay longer in Buenos Aires. But we have work to do, and our work is up north. So, we headed up to Salta on Saturday…where we settled down and rolled up our sleeves.

Here, there are cattle, corn, and alfalfa to be raised up…

…and originarios to be beaten down.

As to the first part of the formula, we are doing pretty well. See for yourself. This land was barren and dry a year ago. Now, after putting in irrigation ditches, it is greened-up, with lush fields. 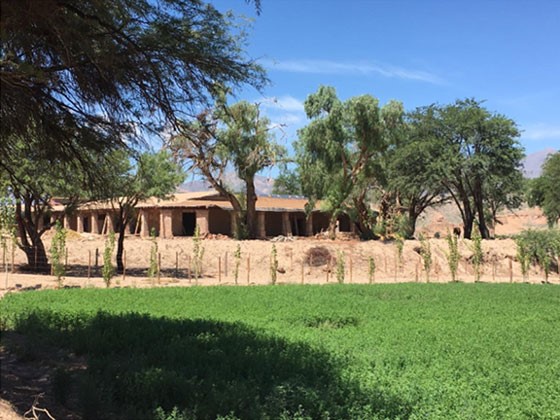 The crops at the ranch are coming in nicely

But it rained in the mountains, and the water is running so strong in the Río Calchaquí that it’s hard to get across. Rather than drive our truck through the river, we had to saddle a couple of horses to ford the fast-moving water.

As for the second part of the formula — our war with the originarios — there is not much progress to report. It’s ‘us’ versus ‘them.’ And we’re losing.

To bring new readers up to date, the ‘originarios’ are local people who claim to be indigenous…and believe that their DNA gives them the right to take our land. We oppose them for three reasons.

First, it’s ours; we bought it from people whose ancestors had stolen it, fair and square.

Second, the locals aren’t really ‘indigenous’…they speak no Indian languages…worship no Indian gods…nor do they practice any more ancient customs than anybody else. One of the local chiefs’ mother was from Germany. Another directed his followers from his apartment in London.

Besides, tribes that lived there were slaughtered by the Inca and the Spanish long ago.

Third, we’re their only hope. The place requires investment. Machines. Money. If we leave, so does the only employer in the area.

The locals would all be unemployed, living in poverty for generations, supported by welfare payments of about $125 a month.

The local politicians can count. The ‘originarios’ are many; we are just one and we don’t even vote.

So, the ‘war’ goes on. The troublemakers claim they own our ranch. We claim we own it. The courts side with us. But the political authorities, and the press, generally, back the locals.

Subscribe now to get our members-only podcast — ‘How to Succeed Financially in a Post-COVID World’. And receive the investor’s newsletter capturing the most decisive financial events that could impact your wealth.

Sign Up for Free Access to Our Podcast Radio Series — 'How to Succeed Financially in a Post-COVID World'.