What is the American Dream?

Where did it come from?

How did it make its mark on our cultural landscape?

In his book Origins of the American Revolution, historian John Chester Miller explored the mythic power of the frontier spirit.

It shaped the culture of early immigrants in profound ways:

The romantic idealism of the Westward Expansion. Source: History.com

What is Manifest Destiny?

It’s the idea that Americans were a special people, a chosen people. They had been blessed with the opportunity to settle upon a bountiful continent. It was their divine mission to expand, multiply, and prosper — from coast to coast, sea to shining sea.

What exactly did that mean, in practice?

Well, to put it simply, immigrants were no longer limited by the oppressive feudalism of the Old World. Children born into poverty and servitude were no longer doomed to follow in the footsteps of their parents. They could strive to be something more. Something better. If they dared to dream it, they could achieve it.

This was the undeniable attraction.

America would be a grand experiment in social mobility, never before attempted in the history of humanity.

Of course, the romance of the Westward Expansion often clashed with the brutal reality.

The second paragraph of the Declaration of Independence did proclaim, ‘We hold these truths to be self-evident, that all men are created equal.’

Yes, this is true. But it was a principle that America struggled to live up to, especially in those early tumultuous decades.

This gap between the haves and have-nots, the powerful and powerless, appeared difficult to reconcile. 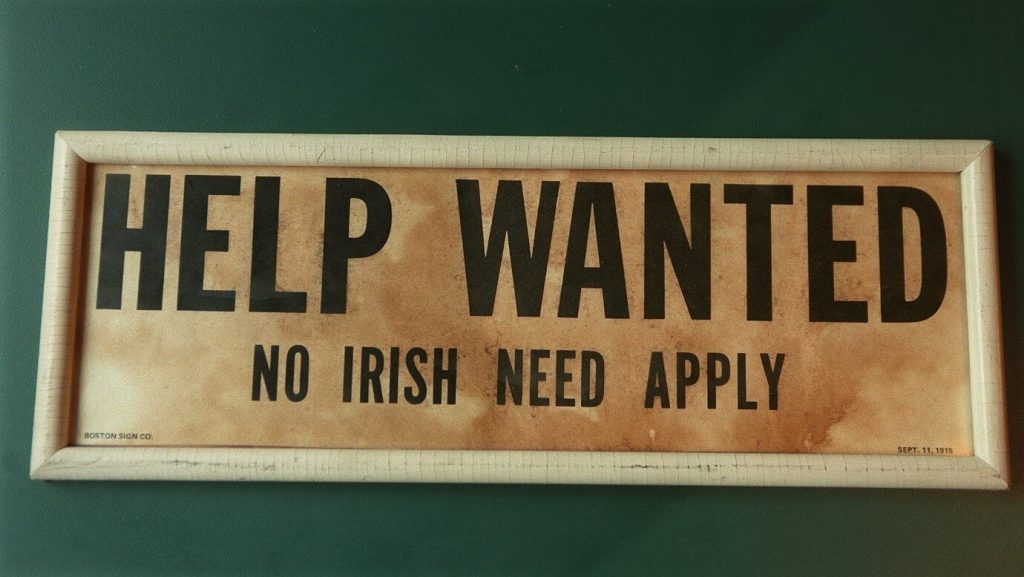 However, over time, something miraculous did happen.

That noble American experiment — that metaphorical tree of liberty — started to bear fruit.

As historian Simon Schama pointed out in his documentary series, The American Future: A History, even those immigrants who were originally bullied and excluded began to find their place in the cultural landscape. Through perseverance, through determination, these people managed to capture their slice of the American Dream. They prospered. They were courageous to overcome those painful periods of transition.

Indeed, this is how the America we know began to take shape.

I learned this pretty early on in life.

As I previously wrote in my article on my family’s history, I’m a fourth-generation Malaysian of Chinese Fuzhou descent.

My childhood was spent listening to traditional proverbs from my parents:

Loose translation: there’s nothing more important than being fed.

So, if you take on a career, make sure it’s enough to keep you fed. If you emigrate to another country, do it to be fed. And even if you don’t like another person, make sure you don’t disrupt their livelihood and starve them, because that’s bad.

This obsession with rice bowls — and being fed — might come across as strange. But when a history of hunger looms large in your subconscious, you can’t help but agonise about it.

My great-grandparents fled China to escape war and famine. Their harrowing ordeal continues to resonate in my family. The raw stories that have been passed down still have the power to evoke both melancholy and terror.

This isn’t a uniquely Eastern melody, of course. You may find echoes of this in the Western world as well.

A friend from Ireland once told me, ‘To be Irish is to remember.’ He was talking about the history of the Great Famine in his homeland. The one where potato crops failed, condemning almost a quarter of the population to die, forcing many survivors to emigrate.

Well, that’s the kind of existential trauma many Chinese can relate to.

For 2,000 years, there were over 1,800 recorded famines in China. Historically, no province was left untouched. They suffered approximately one famine a year.

For the Mainland Chinese, in particular, this feeds into a narrative that promotes authoritarianism and ultranationalism.

The century of humiliation 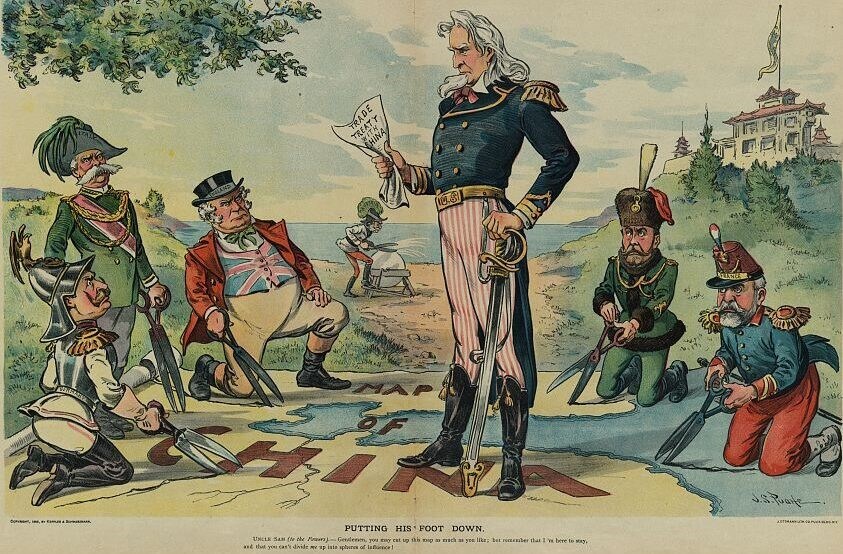 Western powers perceived to be carving up China in the 19th century. Source: Wikipedia

One incendiary message that’s reinforced again and again is the so-called century of humiliation.

This was the period in history when China suffered a series of defeats against foreign adversaries.

In fact, the first economic conflict between East and West happened for reasons that have eerie parallels with what we’re seeing today.

On the surface of it, this felt like a clean and simple deal. A willing buyer. A willing seller.

Problem was, over time, the British Treasury ran low on silver, even as the Chinese government became comparatively wealthy by hoarding silver.

This trade imbalance gave rise to bitter emotions. And in an attempt to replenish their coffers, the British decided to establish a new agreement.

The Chinese government became alarmed at the large numbers of its citizens becoming addicted to opium. And in the name of morality, they halted British shipments, seizing and destroying the drug. 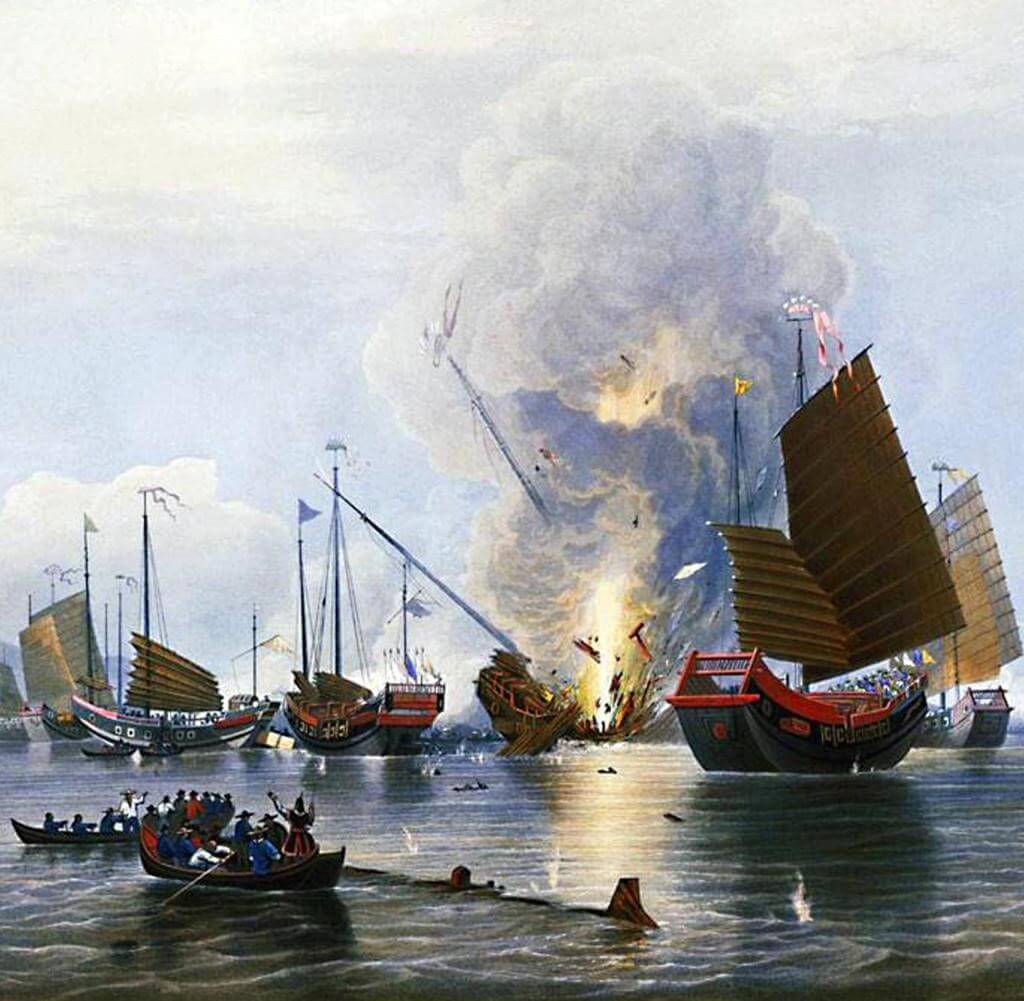 China lost this conflict. Badly. It was not only forced to yield to British trade demands, but also surrender control of Hong Kong to the British.

This was a painful chapter in history. It continues to resonate in the Chinese psyche, fuelling nationalist sentiment. It’s something that the Communist Party gains mileage from.

They have come to believe there’s a score to be settled across centuries.

You only need a grain of truth to exploit people’s deepest fears about loss and deprivation.

Winston Churchill once said, ‘Russia is a riddle wrapped in a mystery inside an enigma.’

But he could just as easily have been talking about China.

Today’s headlines tend to portray the conflict between America and China in economic and military terms, with the motives of the Chinese Communist Party often shrouded in mystery.

But, really, it’s the cultural context that’s the most important:

If you believe that geography is destiny, then it’s no surprise that America and China have come to blows. They have different outlooks. Different perceptions.

Still, even amidst the hostility and turbulence, we encounter a strange fact.

The Chinese actually have a unique name for America — which, upon reflection, is quite unexpected and poignant.

It’s a tacit acknowledgement that the American Dream, while not perfect, still has great inspirational power. After all, America was arguably the first country in the world to promote this grand experiment of social mobility, regardless of race or class.

The Chinese — though they may never admit it outright — crave this same ideal, but are trying to achieve it within an authoritarian Communist framework.

So, here’s the big question for this decade: will these political contradictions resolve themselves peacefully? Or will conflict beget conflict? A new Cold War?

Hopes and dreams; trauma and loss; yin and yang — that’s what’s driving these two proud cultures into a collision course, even if they don’t consciously know it.